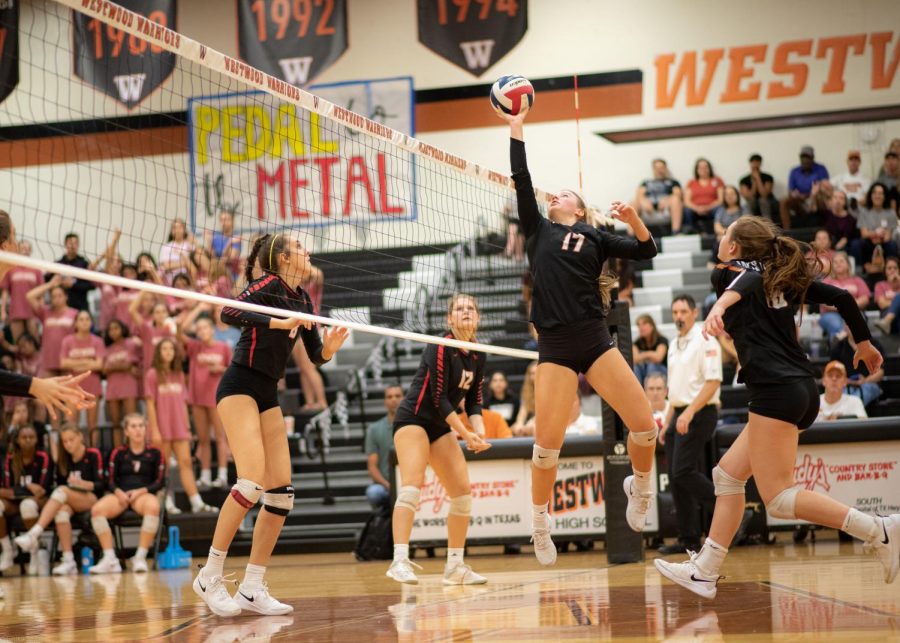 Kenzie Beckham '21 sets the ball for McKayla Ross '22. Ross was able to strike the ball which led the a point for the Warriors. "I am really proud of our fight, we kept on going, no matter what the score was we kept on pushing," Beckham said.

The varsity volleyball team swept the Vista Ridge Rangers 3-0 on Friday, Sept. 20. The game day theme was “Heroes Night”, which was dedicated to police officers, veterans, and the military.

“It’s about all our heroes, the people that have served, who’ve sacrificed themselves and put themselves on the line to save others,” Kenzie Beckham ‘21 said.

Starting the first set off strong, Maddie Gillispie ‘20 aced the Rangers, taking the first point. Following her serves, Audrey Quesnel ‘20, Zoey Menendez ‘20, and Erin Fagan ‘22 pushed the points with kills from the front row. The Lady Warriors stopped Vista Ridge’s offensive plays when Gillispie repeatedly dug up the ball, and Quesnel and McKayla Ross ’22 stopped their hits with blocks. The Warriors ended the first set 25-19.

“For our blocking, we were doing well on getting lined up and pressing,” Ross said.

The Rangers started the second set off with a serve, but they lost the point when their middle blocker was in the net. Quesnel and Menendez kept gaining points when they hit through the Rangers’ blockers. Beckham kept the opponent off balance as she scored multiple dumps from the front row, and the Lady Warriors took the second set 25-17.

“Our hitting went very well tonight,” Abby Gregorczyk ‘21 said. “We were good at placing our hits and making the other team sideout a lot.”

Gillispie started the third set off with an ace, quickly picking up the team’s rhythm. The Lady Warriors offense repeatedly placed kills between the Rangers’ defense, gaining points fast. The Rangers managed to gain their first point when Menendez made a hitting error. Lola Fernandez ‘23 replaced Menendez’s back row and served. Fernandez got multiple aces and carried the team, nearing the end of the set. Towards the end of the third set. the Rangers caught up as Anna King ‘20 and Madeleine Shrull ‘21 couldn’t keep the ball in the court. Peyton Ferree ‘22 stopped the Rangers with a block, quickly ending the final set 25-9.

“My teammates were so support[ive] of me tonight,” Fernandez said. “I love playing with them and I have a really good time on the court.”

The Lady Warriors will soon face off against the Leander Lions on Tuesday, Sep. 24 at Leander High School.