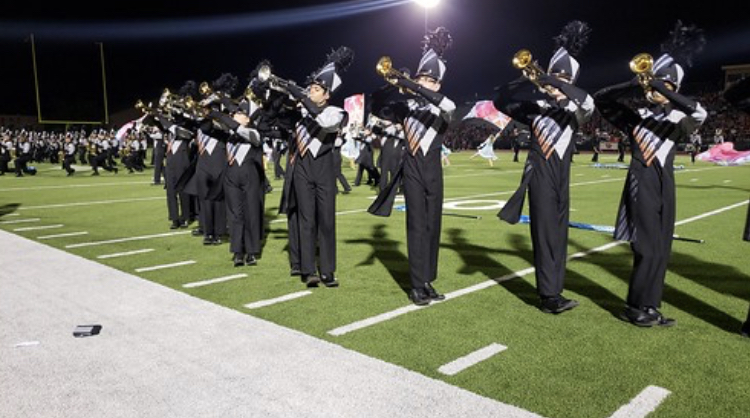 The Westwood Warrior Marching Band performed at the annual RRISD Festival of Bands on Monday, Sept. 30. Almost 5,000 people came together to support the work of students, both in middle school and high school, in the instrumental music programs within their district.

“I really love Festival of Bands,” Erin Xu ‘21 said. “It’s so cool to see so many bands coming together to make one big product for a huge audience.”

Each high school presented two performances, one being a performance of a song with their feeder schools and one being the high school’s competitive marching show. After watching the other schools within their district perform, the band combined with the Grisham Middle School and Canyon Vista Middle School bands to play Land of 1000 Dances, a song selected by the directors of both middle schools and high school. Following that, the middle school students exited the field so they could witness the high school band’s 2019 show, Believe.

“It’s always such a great experience performing for the middle schoolers,” Atalie Farnsworth ‘22 said. “Marching Band is a whole new side of musicality that they’ve never really been introduced to before, and it’s awesome that we get to do this for them.”

Festival of Bands not only showcases different bands from across the district, but it can also greatly affect the 8th grader’s choice to stay in high school band. The Westwood band could possibly be receiving roughly 140 new freshmen for the 2020-2021 school year, just under twice the amount as years past.

“The amount of potential freshmen we have this year is crazy,” Sai Tadiboyina ‘22 said. “Our band could grow to more than 330 people, and we can do even bigger things together in the future.”

The event was, yet again, a great success. The Westwood Warrior Marching Band’s future is bright, as Festival of Bands managed to create a positive environment for next year’s incoming freshmen. It showcased instrumental talents for other schools as well as friends and families so they could have the opportunity to appreciate all the hard work the students put in.