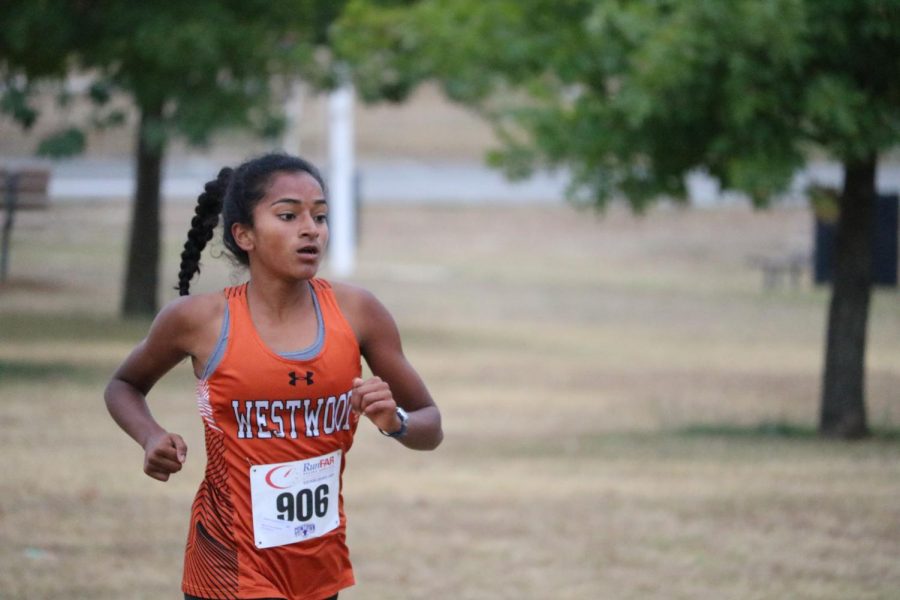 Deepti Choudhury '21 places 7th in the 6A girls race. Choudhury went out with the top pack, and held on to finish the 5K in 18 minutes and 20 seconds.

At the UIL Regional Cross Country Meet, nearly 200 of the fastest qualifying athletes in each region battled for coveted spots at the prestigious UIL State meet, held in Old Settlers Park. The regional meet, which began on Monday, Oct. 28 in Arlington, featured nine Warrior runners – two boys and a full team of seven girls- a record number since the inception of the cross country program decades ago. In yet another unprecedented result for the Warriors, Deepti Choudhury ‘21 and Pablo Lomeli ‘21 managed to secure their spot on the line at state after successful races.

“Making state doesn’t feel as good as I thought it would,” Lomeli said. “Everyone was congratulating me but I honestly wish they didn’t, I don’t want to just be known as the guy who went to state. To think that this is all I’ve worked for the past few years – and finally getting it almost feels unsatisfying – shows that the good moments in life are the little ones, not the big ones.”

Lomeli secured his ticket to state by running a season best of 15 minutes and 37 seconds, landing him in the top 20 runners overall, and the top 10 individuals not on a qualifying team. Choudhury placed 7th overall with a quick 18 minutes and 20 seconds. Choudhury’s season was particularly impressive, as the regional was just the third meet she competed in, and her training has been minimal due to commitments to other sports.

For both athletes, the State Championship will be a culmination of the season – neither of the two will race at the national qualifying meet later in November.

“My goals for state are to just to set a [personal record] and run as fast as I can, basically ‘no regrets’,” Lomeli said.