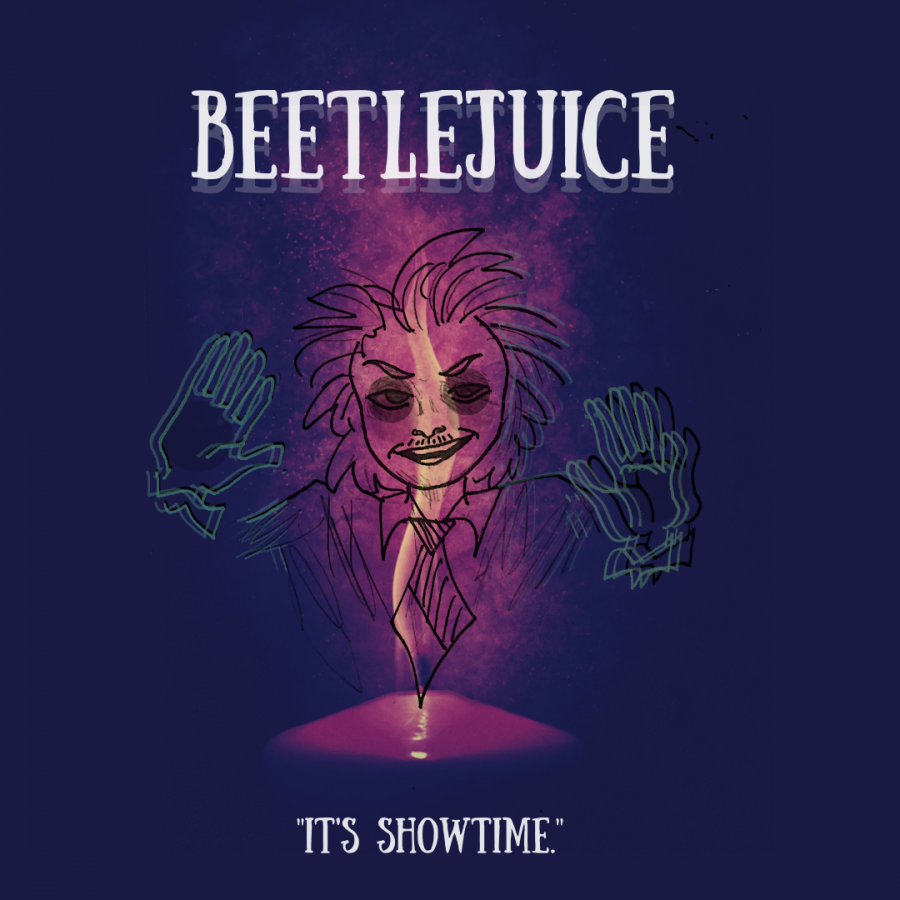 'Beetlejuice' might not be animated like many of Tim Burton's other Halloween movies, but it still shows off Burton's peculiar creativity and dark humor. Graphic by Yunoo Kim

You’re bound to say its name. Most will describe Beetlejuice as a comedy rather than a thriller or slasher film, but it is still one of Tim Burton’s spellbinding Halloween movies. Premiering three decades ago in 1988, Beetlejuice is a classic that has yet to lose the wacky charm that has spurred so many remakes and a persistent fan following. While the film has its gory moments, even the grossest, creepiest scenes of the movie are always accompanied with something to ooh or laugh at. In addition, there are many familiar faces in the cast for current audiences.

The Maitlands, Adam and Barbara, are portrayed by Alec Baldwin and Geena Davis respectively. They are a childless couple who die in a car crash, and are unable to pass on to the afterlife without spending 125 years trapped inside their house. Meanwhile, goth teen Lydia Deetz, portrayed by Winona Ryder, moves in to the Maitlands’ house with her distracted father, portrayed by Jeffery Jones, and snobbish stepmother, portrayed by Catherine O’Hara. Desperate to remove the Deetzes, the Maitlands employ the grungy, crude, and disturbing “bio-exorcist” ghost, Betelgeuse (pronounced ‘Beetlejuice’), portrayed by Michael Keaton, against their afterlife case worker’s advice. Betelgeuse’s full potential can only be unleashed by saying his name three times in a row, and it is as destructive as it is effective. Realizing that Betelgeuse’s chaos will only cause further damage to their lives, Deetz and the Maitlands are then faced with the task of keeping him under control.

The morbid yet humorous tone of the movie, emphasized with its larger-than-life characters and brisk pace, kept me on the edge of my seat. The balance between silliness and horror was enjoyable; genuinely hilarious scenes, such as one that features Deetz’s parents jerkily dancing along to Day-O (The Banana Boat Song) while possessed, are abruptly interrupted by jump scares. The truly darker moments of the movie actually stemmed from a few offhand comments by the characters. An afterlife receptionist remarks nonchalantly to the Maitlands that “if I knew then what I know now, I wouldn’t have had my little ‘accident’”, and there is an uncomfortable scene in which a group of zombie football players are told by their case worker that their coach was the only survivor among them.

The movie does not fall behind on technical elements as well, despite being made during a time with limited CGI technology. The props used within the movie are marvelously constructed, ranging from giant snakes to horrific masks with removable eyeballs. One of the most iconic scenes features Deetz levitating off the ground while dancing, seemingly possessed by the Maitlands. The movie is almost akin to a magic show, with each new scene showing off more impressive illusions than the previous. Besides this, the movie won an Academy Award for Best Makeup and Hairstyling, and Keaton received the National Society of Film Critics Award for Best Actor for his portrayal of the maniacal Betelgeuse.

Today, Beetlejuice is running as a stage musical on Broadway, starring School of Rock’s Alex Brightman as Betelgeuse. The characters of Deetz and Betelgeuse are much more expanded upon than their movie counterparts, while the Maitlands, now anxious and oblivious, are given some major personality tweaks. Even Deetz’s parents are drastically complex, and are shown to be deeply repressed rather than deliberately dismissive.  The musical touches upon sensitive topics such as teen depression and loss of family, but still retains the maniacal, energetic tone of the original movie. It features catchy, original songs such as Say My Name, a snarky duet between the newly-acquainted Deetz and Betelgeuse, and Fright of Their Lives, in which Betelgeuse attempts in vain to teach the Maitlands how to be proper ghosts. It also keeps some of the songs from the original movie, most notably Day-O (The Banana Boat Song). The musical is flashy and honors the movie by using similar props live on stage, complete with the giant sand-worm and the unforgettable levitation scene. Separately, a spin-off animated series ran from 1989-1991, and there has been speculation about a sequel to the movie.

Whether it’s the movie itself or one of the many works inspired by it, Beetlejuice captures the true Halloween spirit with its sarcastic humor and macabre themes. It is a work that will tempt you to watch it once more solely for the purpose of seeing the props in action, or to laugh at all the random background happenings that you missed in your previous watchings. If you are not a fan of gory slasher films, and would prefer a more humorous, spooky film, then Beetlejuice is perfect for you.