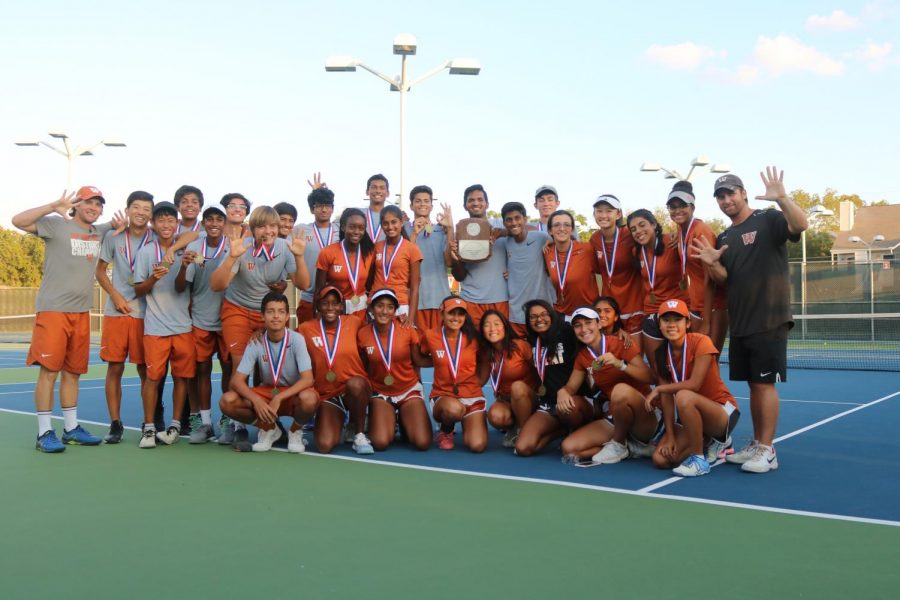 The varsity tennis team poses for a picture, celebrating their tenth straight district title win. In the championship, they dominated Vandegrift for an 11-0 victory.

Under the Texas sun and on the “W” of their home courts, the stage was set for the varsity tennis team to embark on the first step of their journey towards the State Championships: the District 13-6A Team Tennis Championship on Friday, Oct. 4. After nearly four hours of intense playing, the team captured the program’s tenth consecutive title and 25th overall with a victory of 11-0.

The championship began with doubles matchplay. The Warriors’ lineup backed the success they found in the District Semi-Final match they played the previous day against Vista Ridge with another impressive showing: clear communication between partnerships made for promising execution of technique to secure clean victories. In line one, Daniel Antov ‘21 and Marko Mesarovic ‘23 went up against well-matched opponents and stepped up for a phenomenal performance on the court where their individual consistencies at the baseline meshed with aggressive play at the net. In the other doubles matches, Sachchit Sivaram ‘21 and Zeyad Elchouemi ‘22 took care of business, winning 6-2, 6-0. Anirudh Margam ‘20 and Varun Somarouthu ‘20 also contributed to the Warriors’ success with a 6-2, 6-2 victory.

“I thought they played fantastic. We had a great practice Wednesday morning, they got here at 5:45, and worked their tails off. They knew Vandegrift would be a new test and they brought it,” head coach Travis Dalrymple said.

Girls’ doubles only enlivened the courts more as sister duo Kiana Graham ‘20 and Kinaa Graham ‘23 shut down their opponents with no trouble, ending with a 6-0, 6-0 victory.

“We communicated well, and we talked about strategy before the game even started. We played one of the girls before, so we knew how her shots worked,” Mepham said.

In mixed doubles, Azra Pleuthner ‘21 and Gaurav Singh ‘20 partnered for the second time to cement another victory for the team, 6-4, 6-2.

“Well, it was only our second time playing together, but I think that we actually communicated pretty well. He gave me some pointers before we started, telling me to extend my forehand and getting up on the net,” Pleuthner said.

Energy was high after doubles matchplay concluded as the Warriors managed to secure a commanding overall lead of 7-0. Girls’ and boys’ singles both had a strong start led by Kiana who skillfully dominated her opponent 6-0, 6-2, and Gaurav Singh, winning 6-0, 6-4, who would earn the final clincher of the match.

“They’ve played the best they’ve played all year. They broke Vandegrift’s will. When they bring it, there’s no team in the state that can stop them,” Coach Dalrymple said.

The game atmosphere was electric as many Westwood JV tennis players, parents, and teachers came to offer their support.

“You can hear everyone clapping, we’re all cheering for each other, and the energy is really high today. They’re all kind of a family, and it’s so cool to see,” JV Orange player Amoli Agarwal ‘23 said.

Currently ranked first in the state, the varsity team will use this victory as their first step on the road to the biggest stage, the state championship. Following the exceptional success they found the previous season, the team undoubtedly has high expectations, and they take the time to reflect on what a legacy they’ve left so far.

“It’s pretty incredible. When I was a student here, we were winning just like that,” Coach Dalrymple said. “I left for a while, came back, and all of a sudden, someone else was king of the district and it wasn’t Westwood. I just thought that was wrong and I did everything in my power to right that wrong. Ten straight feels pretty good.”

The next step for the team will come on Tuesday, Oct. 15 with the Bi-District Championships.