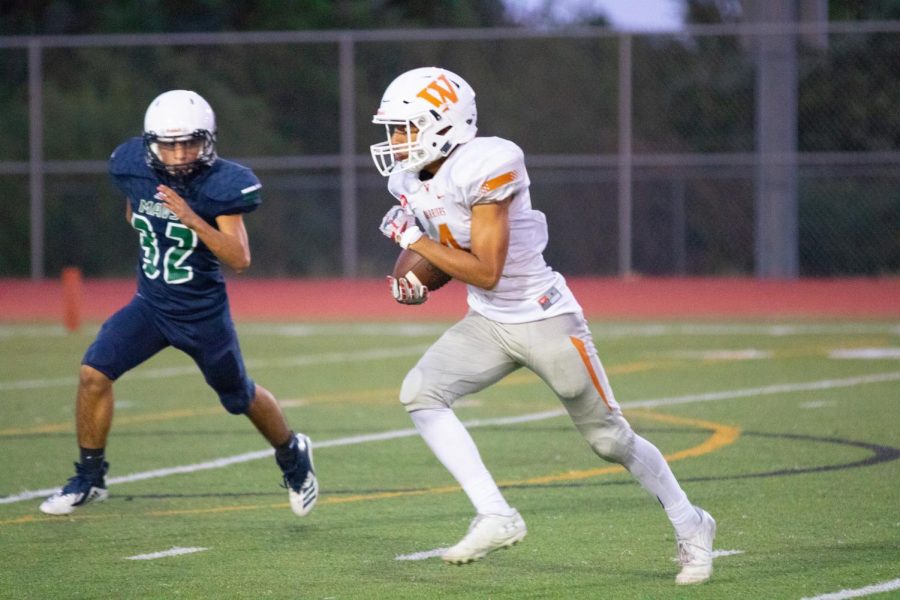 Holding the ball, Rayan Momin '22 sprints down the field. He ended the play by scoring a touchdown.

On Thursday, Oct. 3, the JV Orange football team took on the McNeil Mavericks.

In the first quarter of the game, wide receiver Rayan Momin ‘22 scored the first touchdown within the first five minutes. This was later followed by an interception by the Warriors shortly after McNeil gained possession of the ball. This turnover led to the Warriors scoring another touchdown leaving the score at 14-0 at the end of the quarter.

Not long after the second quarter started, WR Cody Nasrallah ‘22 and Momin added two more touchdowns. McNeil failed to score any points, and the score remained 28-0.

“I think we had good clamps on ‘em,” linebacker Jordan Gibreal ‘21 said. “We were locking down the receivers, and our offense was just putting up points. We just need to get a little better in our technique and work harder.”

Throughout the third quarter, there were many fumbles and incomplete passes and both teams failed to gain any additional points.

“We worked as a team,” defensive back Eric Uffelman ‘22 said. “We worked as a unit and we all had each other’s backs. We need to keep the energy from the start of the game and not pick it up at the end.”

At the start of the last quarter, Momin once again scored the Warriors a touchdown. The Warriors’ defensive line made some plays, and McNeil was not able to score any points throughout the rest of the game. This left the final score at 35-0.

“I mean I think we just went out there confidently and we just got the job done in every aspect,”  Marcos Henry ‘22 said. “We just got to go out there with the same confidence and play the same we did tonight and I think we’ll be fine. “

The JV Orange team will face off against Vandegrift on Thursday, Oct. 17.