JV Orange Tennis Match Against Georgetown Gets Rained Out 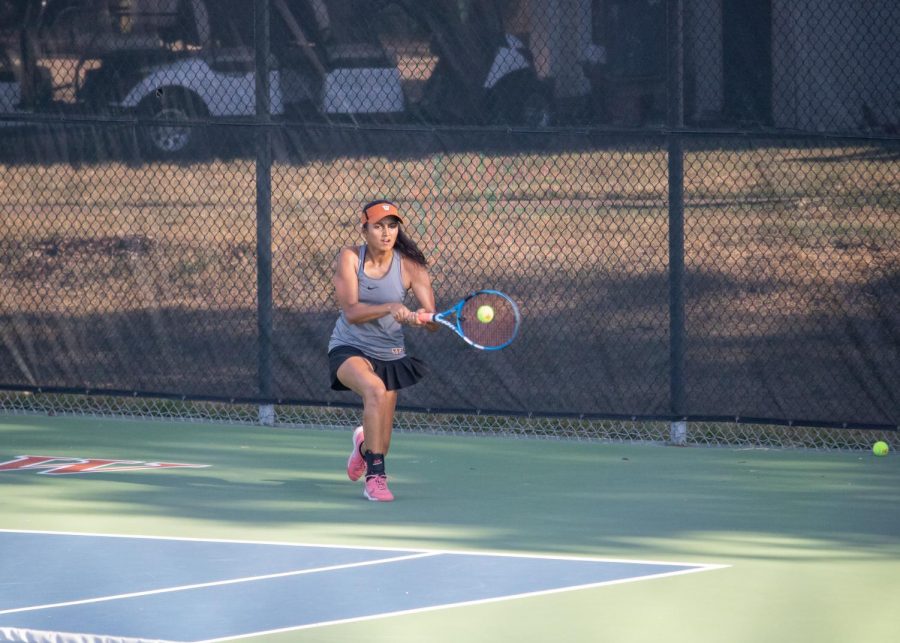 Running to return the ball on the backhand side, Kinjal Khatri '20 gracefully wins the point. Unfortunately, she fell short in her match and lost in two 6-0 sets.

Only three matches were completed before the game was rained out. The coaches and players were disappointed with the outcome, but the game will be rescheduled.

“These kinds of situations are always difficult to deal with as a coach because you want your kids to have the opportunity to play,” JV coach Daniel Veve said. “You want them to be able to put all of the things they work on so hard in practice into a game situation.”

Although the game was rained out, several of the doubles matches were close to being finished. Anisha Aslesh ‘23 and Amoli Agarwal ‘23 were a game away from victory with a score of 7-3, and Neil Choudhary ‘23 and Ishaan Sharma ‘23 had broken their opponents and were up 6-4.

“[My doubles match] was really close,” Choudhary said. “It was 4-4, deuce, and he served and I hit a clutch winner down the line, and that was good.”

“My partner Rahul and I started off a bit rocky,” Ambekar said. “We faulted through our second game. And after that, we led through our match.”

On the girls’ doubles side, Nikita Khatri ‘23 and Aishwarya Shanmugavelu ‘23 were fighting hard against their opponents, trying to get back from being down three games.

“We were up in the beginning,” Shanmugavelu said, “and then everything just went downhill because of my unforced errors and free points that we gave out. The score ended up 7-4, 15-15, and then it rained, and I was like, ‘Okay, so we’re going to do this another day, maybe a better day.’”

“Orange team did great out here today,” Andy Jiang ‘22, who plays for JV Black said. “I saw really good service overall. I can imagine them winning if they continued.”