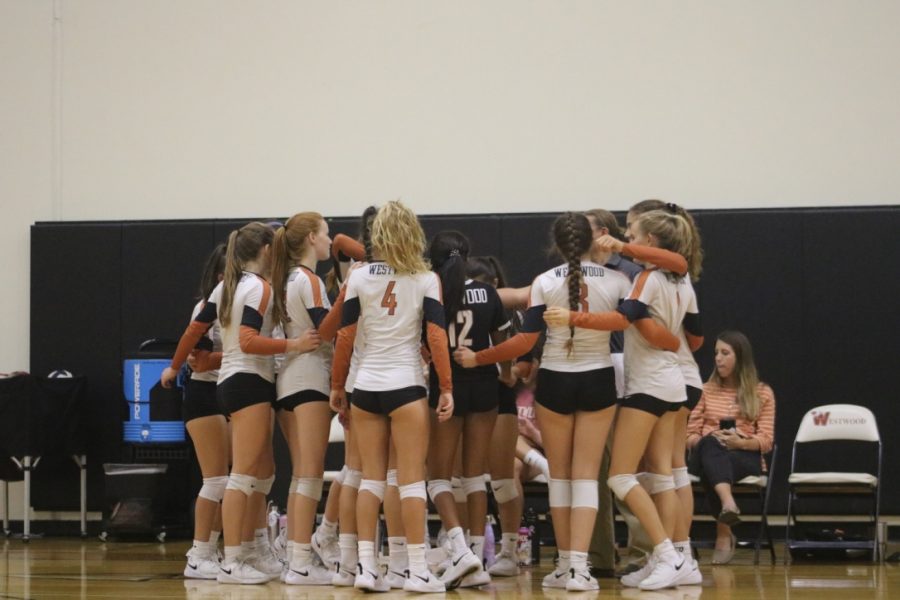 The Lady Warriors getting together during a time out to talk about their next plays. The time out was called by Stony Point, who was losing to the Warriors by a score of 10-3.

The JV White volleyball team went up against Stony Point on Tuesday, Oct. 2nd, beating them 2-0.

“It was a good game,” Bella Schiesz ‘23 said. “We weren’t too nervous going into the game, and we still managed to work well together and not let our defenses down.”

The Warriors dominated the first set. Tayte Webster ‘23 gained eight points for the team just on serves alone. Powerful spikes from Abbey Jennings ‘22 raised the team’s score to 10-3. With high spirits, the Warriors kept on gaining points, leading them to win the set by a score of 25-7.

“It was a good game,” Jennings said. “I think our team showed really good teamwork, as well as spirit.”

In the second set, the Warriors started off with high energy, giving them the lead by a score of 15-3. The Lady Warriors crushed the Tigers throughout the set. Sets by Lydia Harris ‘22 helped players like Jennings and Terin Score ‘23 spike the ball over the net to gain more points. The Warriors won the game 25-10.

“I’m really glad with how our team played,” Catie Duff ‘22 said. “Our team has been doing pretty good this season, and I’m excited to see how the season will turn out for us.”

The JV White team’s next game is at Westwood on Friday, Oct. 4th against McNeil.