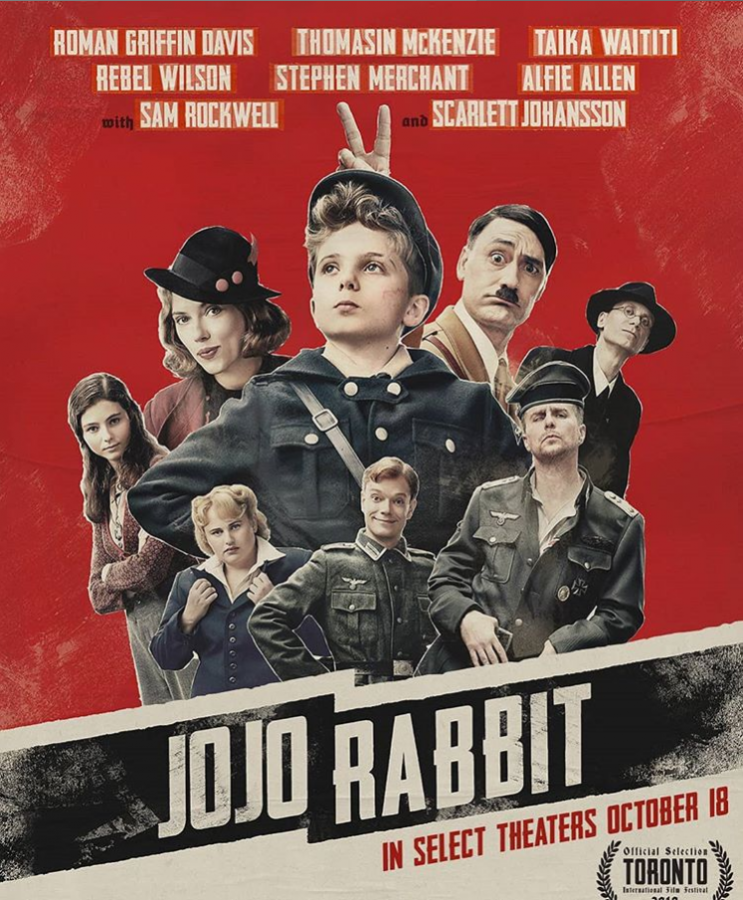 The poster for 'Jojo Rabbit' features the main characters for the film played by outstanding actors and actresses. The colors represent the Nazis and the time period in which the movie takes place, World War II. Photo Courtesy of Taika Waititi Instagram.

At first glance, making a satire based on World War II, one of the darkest periods in human history, and the Nazi regime could appear distasteful and inappropriate, and yet, against all odds, Jojo Rabbit somehow manages to make it all work. Adapted from the book Caging Skies by Christine Leunens and directed by renowned director Taika Waititi, known for his work on the infamous What We Do In The Shadows and the game-changing Thor: Ragnarok, Jojo Rabbit makes for a very unique movie experience unlike any other this year, and makes for not only a well made World War II movie, but an outstanding satirical take on an otherwise grim story.

Jojo Rabbit follows ten year old Johannes “Jojo” Betzler played by Roman Griffin Davis, a German boy recently enrolled in the Hitler Youth, as he comes to the staggering conclusion that perhaps the world is more than the Nazi regime after discovering that a young jewish girl who has been hiding out in his house named Elsa Korr, played by Thomasin McKenzie, is nothing like what he was taught the jewish are like. Right off the bat, the movie’s tone is established, and it’s absolutely baffling how well Waititi manages to poke fun at the Nazis while also not taking it a step too far. Somehow, they stay goofy and hateable at the same time, which is not only a rare combination, but is also a very difficult feat to pull off. The movie isn’t entirely a goofy comedy, either, as it actually manages to sprinkle in some genuinely heartfelt and occasionally profoundly disturbing moments as well, rounding the entire experience pretty well. Some tonal shifts are slightly jarring, but end up working much better later.

Each and every actor in Jojo Rabbit gives excellent performances, with standouts being, of course, Waititi himself as an imaginary version of Adolf Hitler, and Scarlett Johansson as Jojo’s mother Rosie Betzler, who is given some of the more emotional and heartfelt moments in the movie. There were many initial concerns that Waititi’s portrayal might be taking it a bit too far, being somewhat somewhat of a bumbling idiot, but this actually makes sense given the context of the movie, as this incarnation of Hitler is merely a figment of the imagination of a ten year old struggling with his morals. Johansson’s Rosie plays the role of Jojo’s moral compass, and Waititi’s Hitler is the perfect foil to that mindset. Davis and McKenzie also give very believable performances, and likely both have bright futures ahead of them. Sam Rockwell, Stephen Merchant, and Rebel Wilson also all appear as Nazi superiors, and they offer fantastic comic relief while also coming off as rather intimidating at times. Again, this balance is very difficult to find, but Waititi manages to find it.

One major concern about the film was how it was going to handle the Holocaust, which was a very tragic and significant part of this point in history, and the answer to that was that the film basically avoids the topic altogether. While the discrimination of the Jewish people is very much prominent in the film’s story, it never dives into the much darker part of the whole ordeal the race was placed in during World War II, with perhaps only one brief mention of what became of most of them under Nazi control. This could be seen as slightly disrespectful, but it’s probably for the best that this wasn’t addressed, as it really would’ve been very out of place and inappropriate in the story Jojo Rabbit tells. What it focuses on instead is the fundamental flaws of the Nazi regime, the dystopian world that was Nazi Germany, and the horrors of war, and it manages to juggle these concepts quite successfully. One aspect the movie doesn’t handle as well as the others though, is its portrayal of Americans. Without getting into details, as that involves spoilers, it comes across as rather distasteful and questionable, and could’ve been handled much better.

Jojo Rabbit is Taika Waititi at his best, and his solid world building and storytelling makes for a very enjoyable and memorable experience. With this being yet another excellent addition to his lineup of great movies, it only further builds the hype for his next big film, Thor: Love and Thunder, set to debut in 2021.