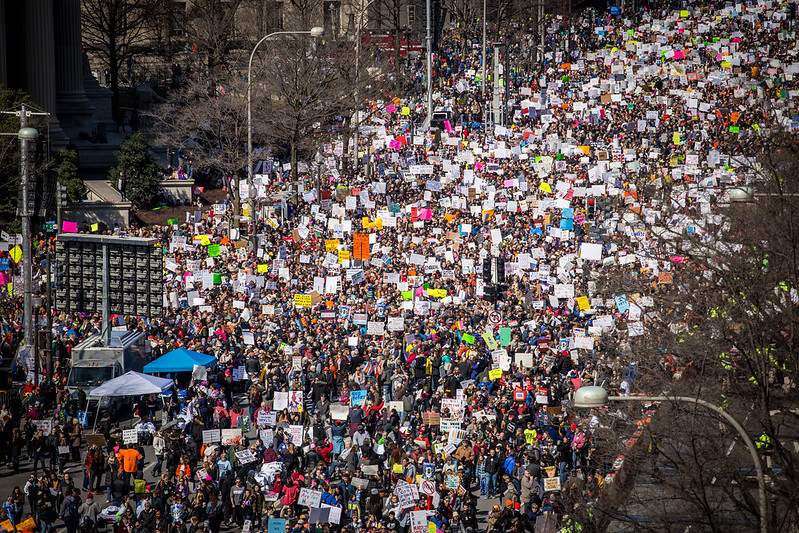 Following the Stoneman Douglas shooting, hundreds of thousands gathered for the March for Our Lives rally to protest gun violence on March 24, 2018.

Controversy emerged once again on the internet during New York Fashion Week from Sept. 6 to Sept. 14 when a label debuted its new line of hoodies online. Bstroy, a streetwear brand based in New York, released a series of Instagram posts showing off designs of sweatshirts with the names of schools such as Sandy Hook and Virginia Tech on them. Though these words were innocent enough on their own, the outrage arose from the fake bullet holes punched into the fabric, referencing the shootings that occurred at each of the schools.

The four names displayed on the clothes, which were designed by Brick Owens and Duey Catorze, were the sites of the four deadliest school shootings in the United States. On April 16, 2007, Seung-Hui Cho gunned down 32 people on the Virginia Tech campus. On April 20, 1999, Eric Harris and Dylan Klebold went on a shooting spree at Columbine High School, murdering 13 people and wounding more than 20 others before committing suicide. On Dec. 14, 2012, Adam Lanza killed 20 children and 6 adults at Sandy Hook Elementary School. And on February 14, 2018, Nikolas Cruz opened fire in Marjory Stoneman Douglas High School and killed 17. Each of these shootings marked a period of grief, mourning, and loss for the United States and changed the country forever.

The response to Bstroy’s clothing line release has so far been mixed. Some have praised how the line raises awareness and will spark discussion about gun violence in the United States. Others, however, oppose the insensitivity of the line and the profits the company could be making off the designs. “This is just absolutely horrific,” the Vicky Soto Memorial Fund, established after the murder of teacher Victoria Soto during the Sandy Hook shooting, tweeted. “A company is make light of our pain and other’s pain for fashion. Selling sweatshirts with our name and bullet holes. Unbelievable.” Survivors of the shootings or relatives to victims have also expressed outrage. “Under what scenario could somebody think this was a good idea?” Fred Guttenberg, whose daughter was killed in the Stoneman Douglas shooting, posted online. “This has me so upset.”

Since the backlash, the people behind the clothing line have released their own statements in response. “We wanted to make a comment on gun violence and the type of gun violence that needs preventative attention and what its origins are,” Owens wrote, “while also empowering the survivors of tragedy through storytelling in the clothes.” However, along with these responses, Bstroy has also said that it is now considering selling the line. “The hoodies have only been shown not sold, and the school shooting hoodies were initially intended to be just for the show and not to sell but that may change now,” Co-founder of Bstroy Dieter Grams stated. “Art’s Job is to wring emotion out. What we do with it after is subjective and on us.”

While it is true that gun violence in the United States must be addressed further, Bstroy’s new line seems to only be shifting the conversation backwards. With its shocking use of fake bullet holes, the designs convey an insensitivity to the actual victims of the horrific tragedies it displays. “There are so many ways to use fashion and clothing to make sociopolitical commentary — this isn’t it,” one Instagram user said under the photo of the sweatshirt for Sandy Hook Elementary. “How do you think the parents who saw their children’s clothing with bullet holes through them feel seeing this?”

And though this is Bstroy’s signature style — designs that are dark and make “violent statements” — they may have taken it too far this time. Ultimately, the sweatshirts won’t be raising awareness and attention for gun violence in a positive way. They will be desensitizing the public to each mass shooting that devastates the United States and each person impacted by the crimes. They will be chipping away at the shock we feel after each tragedy that pushes our government and society to change. Gun violence is already becoming perceived as a regular and unsurprising occurrence by the public, and the designs will only make it worse.

Not only is the line unsympathetic, but it could also be potentially triggering to survivors or others affected by the shootings. “I lived through this…you don’t even know how it is to live everyday with reminders everywhere you go,” Stoneman Douglas survivor Angelina Lazo wrote online. “There’s so much trauma with (not) only myself but with thousands of other people who have experienced gun violence.” By disregarding the emotions and opinions of those who directly experienced gun violence in our nation, Bstroy completely loses sight of why reducing gun violence is so crucial.

Regardless of whether the designs themselves are socially acceptable, they become even uglier when considering the profits Bstroy may soon be making off the clothes. It’s one thing to be making strong political statements through fashion; it’s quite another to then be making money from it. Other organizations, such as March For Our Lives, direct all their apparel proceeds towards “supporting the gun violence prevention movement and organizing youth across the country.” Selling the designs and keeping the revenue sets a bad image for gun violence awareness by making the conversation so much more superficial and seemingly greed-motivated. If Bstroy makes the call to sell their new line and reap the benefits, it will be poisoning the gun violence movement and setting back the progress that the U.S. has already made towards change.

Gun violence remains a delicate issue. As shooting after shooting continues to rock communities across the nation, it’s important to be sensitive yet urgent about making change happen. Otherwise, we will become more and more numb to the pressing issue threatening our society. While well-intentioned, the sweatshirt designs accomplish nearly the opposite of what their purpose originally was. However, if there is one lesson that has come from them, it is that we must be more careful than ever not to step over the line.