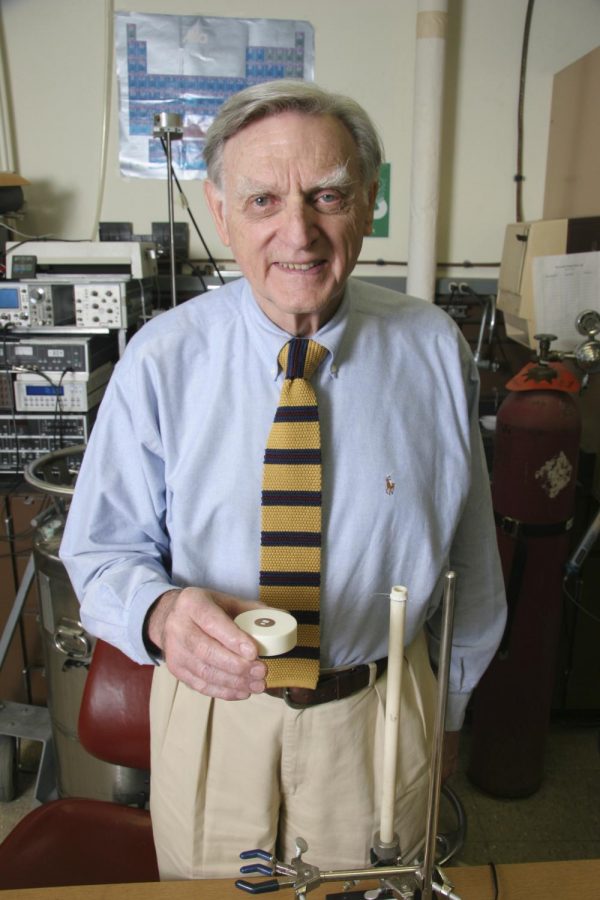 University of Texas at Austin

In 2019, Professor John B. Goodenough of the University of Texas at Austin’s engineering department became the oldest Nobel Prize in Chemistry winner at the age of 97.

Goodenough is not only the oldest Nobel recipient in the field of Chemistry, but also the oldest Nobel Prize laureate of all time. He received news of his Nobel Prize the same day that he was awarded the prestigious Copley Medal, the world’s oldest scientific prize, bestowed the Royal Society.

He received the Nobel Prize alongside Professor Akira Yoshino of Meijo University and Professor M. Stanley Whittingham of Binghamton University for the development of lithium-ion batteries.

Lithium-ion batteries are a type of rechargeable battery commonly found in smartphones. They also contribute to energy storage functions of renewable energy sources. Whittingham first created the batteries in the 70’s in an attempt to create an energy technology free of fossil fuels. Goodenough further improved the strength and potential of the batteries by replacing the chemical components, and Yoshino stabilized and commercialized these developments.

Goodenough was born in Jena, Germany in 1922, and served in the U.S Army during World War II as a young meteorologist. He then worked in the MIT Lincoln Laboratory as a research scientist for 24 years. Despite reaching the age of 64 after teaching and researching at Oxford University for ten years from 1976 to 1986, an age when most retire, he promptly resumed his career as a professor at U.T. Austin.

When asked if he had a secret for an extensive, successful career in technology in a telephone interview with the Nobel Media, Goodenough simply offered the words, “don’t retire.”

“It’s how people use the technology that’s the important thing,” Goodenough said. “You put the technology out there and it can be used for ill or for good.”

The professor strives to make improvements in battery technology at U.T. even today, and continues to be an inspiration for many scientists with his resolve and contribution to modern society.