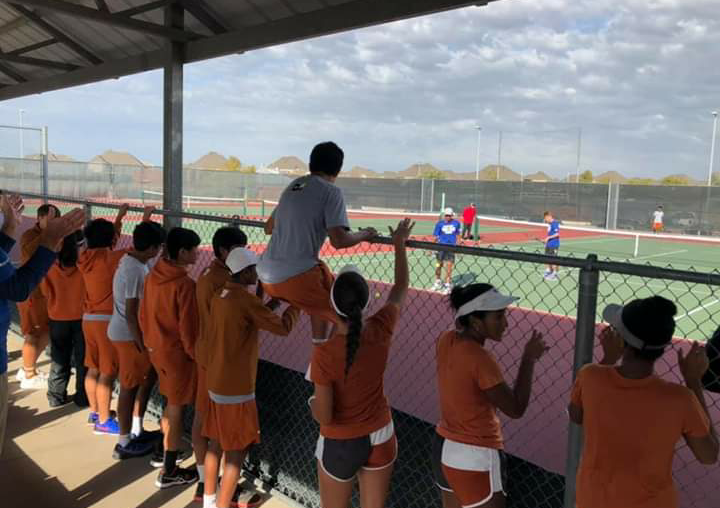 The varsity squad takes to the sidelines to cheer on their fellow teammates Varun Somarouthu '20 and Ani Margam '20. who'd go on to win their match. Photo courtesy of Ms. Ruma Nagar Singh.

Piercing the early morning chill, hopeful ‘Go Wood’ chants launched the varsity tennis squad into the toughest and most pivotal match of their fall season: the Regional Semi-Final against Plano West High School on Thursday, Oct. 24.

In the clash of two high-ranked lineups, both teams attempted to capture an early lead and run with it. For the Warriors, the pressure was on to utilize powerful doubles matchups to help launch them to success.

Backed by high-spirited teammates, the players battled their way through a head-to-head clash while the air was filled with words of encouragement. Matchplay opened up with doubles, and after several thrilling matches, the Warriors would end the first half of the afternoon down 4-3.

“We knew PW [Plano West] would be incredibly tough in doubles and they were. It was a battle,” head coach Travis Dalrymple said.

The Warriors battled hard under immense pressure to close out singles matches and it was up to Jessica Lu ‘21 to seal the win, but a close loss of 10-8 in the super tie break sealed the deal and eliminated the team from the playoffs. As the number one seed in the state, hopes are high as the team returns to their home courts to prepare for upcoming tournament play in the spring season.

“We want to use [the loss] as motivation. We have stuff we need to work on to get better and we plan to do that. We will use that loss as fuel to make ourselves better. This was the state championship in my opinion and we came up just short,” Coach Dalrymple said.