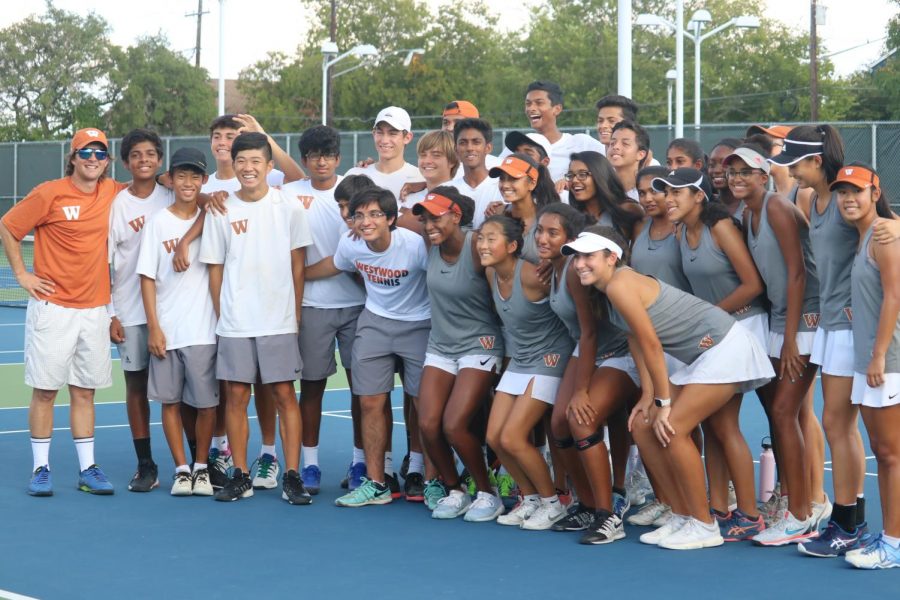 The varsity tennis team poses for a team picture after their impressive victory over the Vista Ridge Rangers. They will take on the Vandegrift Vipers in the finals.

The varsity tennis team took on the Vista Ridge Rangers in the district semi-final on Thursday, Oct. 3, securing an impressive overall victory by a score of 11-0.

The team took to the courts immediately, gaining an early 7-0 start in doubles. Line one boys Daniel Antov ‘21 and Marko Mesarovic ‘23 shut down their opponents in two sets, winning 6-1, 6-3. Excellent communication between partnerships made for stellar performances on the court, where blowout matches played by the duos of Sachchit Sivaram ‘21 and Zeyad Elchouemi ‘22 and Anirudh Margam ‘20 and Varun Somarouthu ‘20 sealed 6-1, 6-2 and 6-0, 6-1 victories.

“They got off to a fast start, and took care of business real quick. Vista Ridge had some good players and our team just capitalized on what they needed to do,” head coach Travis Dalrymple said.

In mixed doubles, Gaurav Singh ‘20 and Azra Pleuthner ‘21 were a relatively new partnership, but collaborated to bring the Warriors even more triumph with a 6-3, 6-1 win.

The afternoon continued with singles matchplay, as both Sivaram and Graham ’20 controlled their opponents with 6-0, 6-0 victories.

“They’re just an absolutely incredible community of players. I love each and every one of these kids and how much they bring to the table. Just how hard they work, you can’t duplicate it,” Coach Dalrymple said.

Crowding around the courts, ‘Sko Wood’ chants were electric as players and parents took to the sidelines to support their fellow teammates. As matches ended, the team couldn’t help but reflect on the incredible legacy the program has come to represent.

“This group of seniors, from freshman year until now, it’s been absolutely unreal. They’ve really taken control, and it shows how much leadership they have,” Coach Dalrymple said. “We just finished a match, and I’ve still got two boys asking if they can hit for another hour. You can’t coach that, they have to want to do that.”

With this victory, the team is looking to capture their tenth straight district title, where they will play the state-ranked Vandegrift Vipers on Friday, Oct. 4. Winning this match will be a big test for the remainder of the fall season.

“Winning tomorrow, would be ten straight [district titles]. It would be pretty incredible. As I told the team, I feel pretty bad because we have bigger goals and pictures in mind, and we’ve kind of taken it for granted over the last few years. We’ll put a battle out there tomorrow and see what happens,” Coach Dalrymple said.