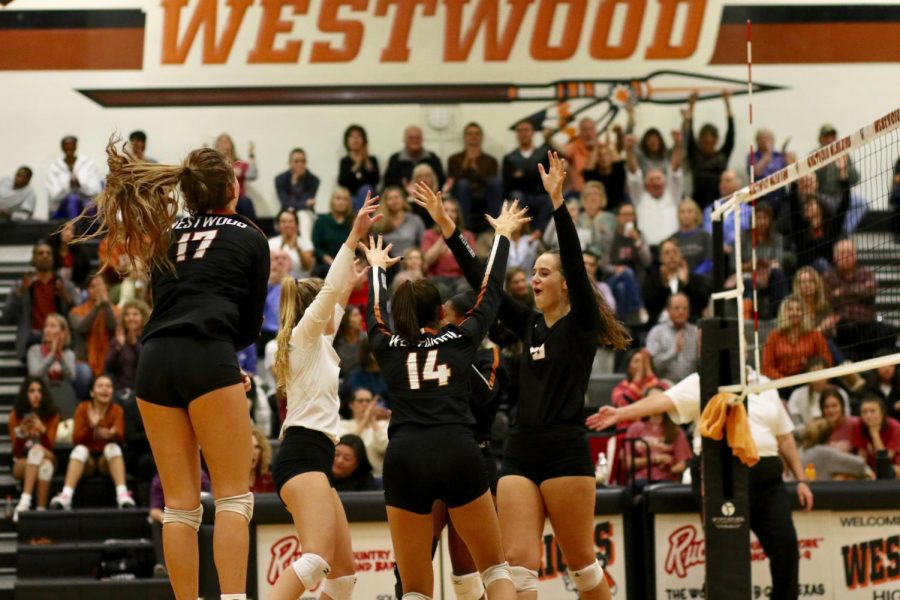 The team celebrates after scoring a point. This was near the end of the third set, so tensions were high.

The varsity volleyball team defeated the Round Rock Dragons once again and for the final time this season on Tuesday, Oct. 29 at home, dominating in all three sets. The annual Senior Night was also celebrated, which brought with it a massive crowd.

The game kicked off with the Warriors scoring the first three points of the game. Defensive specialist Maddie Gillispie ‘20 and outside hitter Abby Gregorczyk ‘21 were unable to stop a kill from the Dragons, leading to their first point. They followed with another one, and outside hitter Peyton Ferree ‘22 stopped them from scoring their third in a row. This effort rewarded the Warriors with a point of their own. Setter Kenzie Beckham ‘21 scored another point with a jump and kill, and two fouls led to both of the teams receiving points. A long rally unfortunately ended with a point for the Dragons, but Gillispie retaliated with a kill. A save from Gregorczyk couldn’t stop the ball from landing out of bounds and another miss led to two points for the Dragons. Middle blocker McKayla Ross ‘22 scored a point, and Beckham scored two additional points through serves. A foul on the Dragons rewarded a point to the Warriors, but a slip up by Gregorczyk and DS Sara Sagues ‘21 granted Round Rock the opportunity to make that up. The Warriors missed again, costing them a point. Right-side hitter Zoe Menendez ‘20 scored a point, followed by a slip up by Beckham, which gave a point to the Dragons. Yet another long volley resulted in a point for the Dragons, but the Warriors retaliated with three more points. The Dragons countered this with three points of their own. MB Audrey Quesnel ‘20 scored a point, and Gregorczyk blocked for another. Another opportunity for a block was not met, scoring a point for the Dragons, and they managed to follow up with two more. Gregorczyk scored two points, but the Dragons killed for two as well. Menendez missed an incoming kill, and a block fail followed by another score awarded the Dragons three more points. Menendez scored two more points, and the Dragons countered with another two. A kill from Quesnel ended the first set with a victory for the Warriors 25-23.

“I think we went into this season not knowing if [remaining undefeated] was gonna happen, and we worked really hard for this,” Quesnel said. “We only had one game this week, so we were really just working hard. Round Rock’s one of our biggest competitors.”

The second set saw the Dragons serving two back to back fouls, which they made up for with a score and then a kill that resulted in the Warriors hitting the net. The Dragons hit another out, but Menendez missed a kill, tying up the score once again. This turned into a long pattern that concluded with a block from Ross. The score at this point following the pattern was 17-15 in the Warriors’ favor, but the Dragons managed to tie up with a couple of kills that proved to difficult to block. Gillispie made a close shot when she grazed the net, catching her opponents off guard, and a kill from Beckham that the Dragons unsuccessfully attempted to counter with an unexpected kick awarded the Warriors with another point. Both sides repeated kills until the Warriors wound up ultimately winning their second set in a row 25-18.

“Coming into the season, we definitely felt like this was our goal [to remain undefeated], but a lot of us didn’t know if it would actually happen,” DS Abi Rucker ‘20 said. “Pulling it off felt really awesome. We worked so hard for this, and being able to get the trophy and stay undefeated was really cool.”

Quesnel started off the third set with a point for the Warriors, and the Dragons retaliated with a point as well. Both teams made two consecutive mistakes which cost them both points. The Warriors amplified the intensity of the game when they began repeatedly scoring, leading them to obtain more than double the points of their opponent. Beckham and Rucker both made kills, and despite the Dragons’ best efforts to catch up, they were smacked back down by another kill from Beckham and a kill from Quesnel. A spike from Ross led to a counterattack from the Dragons, and a couple of kills later, the game came to an end with the Dragons hitting out of bounds, which brought the score to a climactic 25-12. The Warriors emerged victorious, having won all three sets, and celebrated afterwards with cupcakes and lemonade. The seniors all posed for photos, and tearfully embraced each other knowing their final home game was over.

“It’s always kind of an emotional night,” head coach Tara Grant said. “I’m definitely proud of [the team] for sweeping tonight; it wasn’t looking like a sweep. I feel like we turned it on a little bit more each season. In the end it was great, and we got all the seniors on the court together, and it was awesome because they got to close it out together. Honestly, I’m just so proud of this team. They put so much work into getting where they’re at right now, and I don’t think any of us would’ve thought this is where we’d by at the beginning of the season, but that just goes to show how dedicated they are.”

The Warriors will now move on to the playoffs.