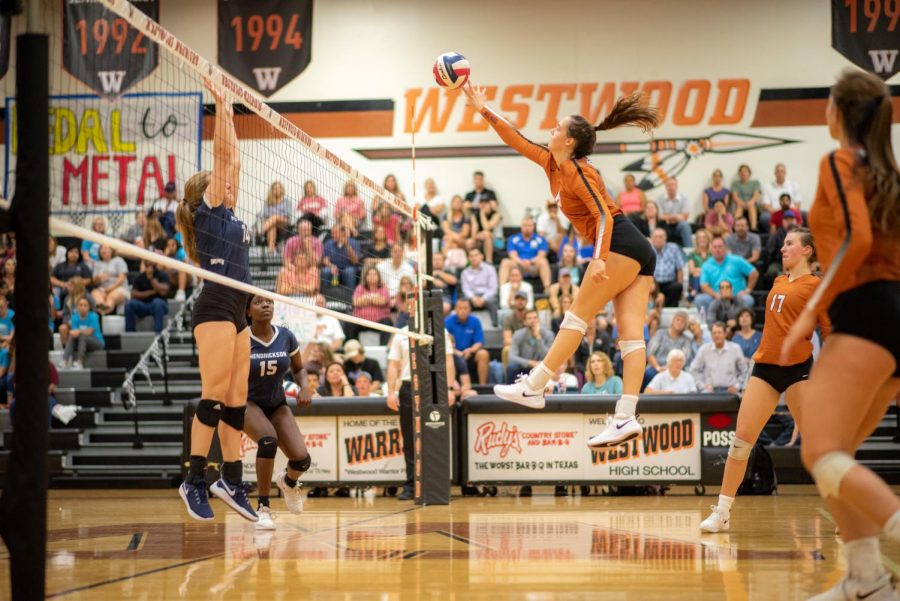 Barely touching the ball, Audrey Quesnel '20 passes the ball to the opponent side. Quesnel has been on the varsity team since her sophomore year and has committed to go to Northwestern State University.

The varsity volleyball team took down the Hendrickson Hawks 3-0 on Tuesday, Oct. 15 during Future Warriors Night. Athletes from Canyon Vista Middle School and Grisham Middle School came to the Field House to support the Warriors. The program staff sold shirts from past years and held a serving contest for the middle schoolers.

“Future Warriors Night was a[n] opportunity to show our future athletes to be a good team player and support your team,” Erin Fagan ‘22 said.

In a rough start to the game for the Warriors, Hendrickson scored the first point of the night when their outside hitter got a kill. Kenzie Beckham ‘21 assisted the team and earned their first point with a front row dump. After a long rally with both teams showing clear communication, Audrey Quesnel ‘20 ended it with a kill from the middle. Peyton Ferree ‘22 and Zoey Menendez ‘20 executed the ball from both sides, not letting the Hawks get a touch, shaping the score to be 9-6. Abi Rucker ‘20 contributed to the team and held Hendrickson down with her serves. Beckham finished the first set quickly, 25-11, by sending the ball to the corner of the court.

Menendez started the second set off strong with kills from the right side and serve aces. The Hawks bounced back with their serves, making the Warriors unable to receive them. Beckham and Abby Gregorczyk ‘21 racked up a few points with tips, avoiding the Hawks’ defense. The Lady Warriors made a few errors, which aided the opponents’ comeback. Hendrickson took the lead with blocks and the Warriors’ mistakes, making the score 18-16 in favor of the Hawks. Head coach Tara Grant called a timeout to help her team regroup and fix their gameplay. Menendez scored back-to-back blocks, which helped the Warriors gain momentum and hit set point. The Hawks continued to fight back but Quesnel ended the long and close second set with a kill down the middle, with the score being 25-21.

“At the beginning we were all very frantic. We didn’t play our level and we let them have a chance,” Fagan said. “But at the end we calm[ed] down and played our game.”

Maddie Gillispie ‘20 began the final set with a serve ace, quickly gaining a rhythm for the Warriors. However, Hendrickson trailed behind the ladies’ tails and kept the Warriors on their toes with kills from their pin hitters. Both teams traded points with errors from communication and serves. Menendez created a point gap between the teams, pressuring the Hawks to take a time out, 18-8. Gillispie and Fagan carried the team further with a variety of serves. Anna King ‘20 gained set point with a kill from the right side. The Hawks continued the game, trying their best to stop the Lady Warriors. Madeleine Shrull ‘21 halted Hendrickson’s momentum with a block, finishing the game 25-12.

“It wasn’t really our best game,” Menendez said. “But we all played strong and did a good job finishing.”

The varsity volleyball team will battle against the Vandegrift Vipers to defend their undefeated winning streak on Friday, Oct. 18 at Vandegrift.