Austin Should Prioritize Helping the Homeless Over Restricting Them 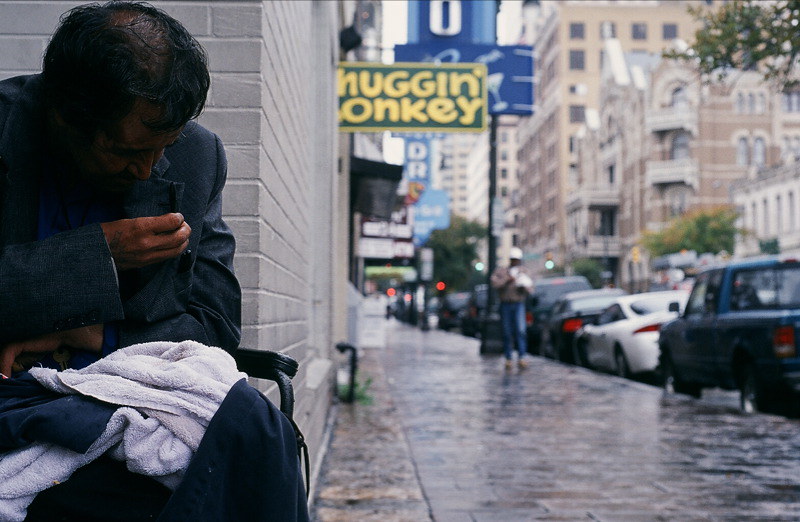 A homeless man sits outside the Chuggin' Monkey bar in downtown Austin. The homeless population of Austin has been steadily rising over the last few years, keeping hundreds out of shelters and on the streets.

However, over 2,000 people in Austin have. Simply put, we have a homelessness problem. We have all seen the victims of this predicament under the bridges of State Highway 185 in their camping tents. We have seen them begging on the side of the road for money. They’re everywhere with their signs pleading for a better life.

As the abundance of homeless people in Austin quickly became a large issue, people began taking a stand. Earlier this year in June, the City Council voted to lift the ban on all camping, sitting, and lying on public sidewalks unless there was a clear threat. However, after much public outcry from those who didn’t like the freedom the ordinance gave to the homeless, the council voted to make some changes to it. As of Monday, Oct. 28, homeless citizens are no longer allowed to camp on sidewalks, and sitting or lying within 15 feet of the entrance or exit of businesses or residences is prohibited.

Many have applauded the new changes to the ordinance and have even pled for more changes to further restrict the homeless to shelters. These are the same people who label the homeless camping underneath arches “annoying” and fail to realize that they have nowhere else to go. Sure, Austin has taken steps towards eliminating homelessness through policies such as the Housing First solution, but they have not been enough. By imposing these new limits on the homeless, the government is making their lives even more difficult. The problem to address shouldn’t be the annoyance homeless people present to civilians, it should be the fact that we have so many homeless people in the first place.

The reason there are so many homeless people on the streets is that shelters are filling up lightning fast. There are over 400 people on a waitlist to get into Salvation Army’s shelters and only 822 beds in Austin homeless shelters right now, which just isn’t enough for over 2,000 people. In 2017 alone, 117 people were turned down from shelters. Rather than putting so much effort into an ordinance, we should be trying to solve the root of the problem, which is the shelters. Providing proper shelters would prevent homeless people from having to camp under highways. We need to build more shelters, find more volunteers to work at them, and donate more towards maintaining the shelters. The only way to solve this issue is if we all pitch in and collaborate. We shouldn’t simply let the government deal with this problem alone. As citizens, we should all take a stand and fulfill our responsibility in society to make sure everyone can live a happy life.

The homeless aren’t just homeless people, they are humans experiencing the devastating effects of homelessness. They are suffering and it is our job as citizens to provide help, no matter how much we choose to give. The best potential solution out of any is helping the homeless find shelter and food. Those are two essentials to life and providing them to these people is the only way we can efficiently and effectively solve this problem.

This doesn’t mean we all have to donate a million dollars to a shelter, although it would be ideal. Just by volunteering at a shelter or a food bank, we can directly make an impact, human-to-human, on these victims’ lives. Helping out in emergencies, taking an interest and showing kindness, becoming more informed about homelessness, donating, volunteering, advocating, and giving small gifts are also great ways to help out. Even simply smiling and saying hello to someone who has been struggling with homelessness can make their day.

It makes sense that civilians don’t want to see the struggles of the homeless every day on their morning or afternoon commute. However, instead of further restricting the homeless and refusing to sympathize with them, we should all pay more attention to this crisis which is in dire need of a solution. The solution to getting homeless people off the streets shouldn’t be about coming up with ordinances to forcibly kick them out. It should be focused on helping them find better shelter and better living conditions. It should be about finding them a better life they deserve.