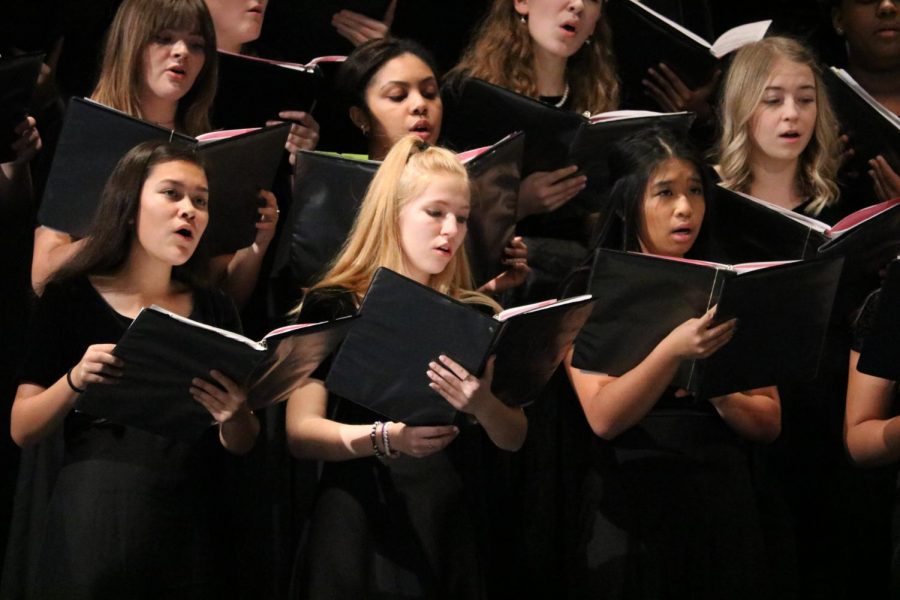 Elsa Hughes '20 sings with the rest of the sopranos. Six people from Westwood made the Region for sopranos.

On Saturday, Nov. 9, 37 Westwood Choir members attended the Region Clinic and performed in the Region Concert in Georgetown High School. Both the clinic and concert were held for students who had succeeded in the Texas Music Educators Association (TMEA) region auditions. The participants spent most of the day rehearsing TMEA pre-area audition songs in the clinic with instructors, and displayed their talents to family and friends at the evening concert.

The Region Treble Choir began the concert by singing Composition of a Kiss and My Lord Has Come, both elegant, swelling pieces. They then performed Kyrie/Gloria, a song with repeating, expressive lyrics.

The students also sang Hlohonolofatsa, an upbeat South African song which was led by soloists with powerful voices. The background voices sounded like rolling thunder as they echoed the soloists, and were accompanied by percussion instruments and a tambourine. After Hlohonolofatsa ended, the Region Mixed Choir took their place on the stage.

“This concert means a lot, especially because I’m a senior,” Westwood Choir Co-President Rachel Rusch ‘20 said. “Going in to the all-state competition round is very fun and I also get to sing this amazing music with all these amazingly talented people.”

The female members of the Region Mixed Choir performed Salut Printemps, a French piece which opened with a cheerful trill of the piano. The female members then parted to either side, and the male members joined them on stage to sing Laus Trinitas and Geistliches Lied. Laus Trinitas means ‘praise trinity’ in Latin, and is a slow, melancholy piece, while Geistliches Lied was written by famous composer Johannes Brahms. The choir sang Mount Rushmore #3: Theodore Roosevelt, an interesting piece by Michael Daugherty, in that it’s lyrics were taken from quotes by former United States president Theodore Roosevelt. The line “There are no words that can tell the hidden spirit.” was repeated, and increasingly urgent pleas of “Leave it as it is!” could be heard throughout the song, referencing Roosevelt’s opinion on nature and conservation. The singers alternated between a soft, slow melody and a rapid, intense tempo, keeping the audience fixated. They ended the song with one last abrupt shout of “Leave it!”. The song Mount Rushmore #4: Abraham Lincoln followed, which similarly took quotes from Abaham Lincoln, particularly from The Gettysburg Address. The concert ended with Unclouded Day, an inspiring, cheerful gospel song.

“Last year, I was in the Treble Choir, so this was a new experience to sing with the guys [in the Mixed Choir],” Anushka Mazumdar ‘22 said. “I really enjoy creating music all day with these people, especially with the wonderful clinicians. It was tiring but it was worth it in the end.”

27 of the 37 Westwood students in the concert will be participating in the pre-area auditions in November.