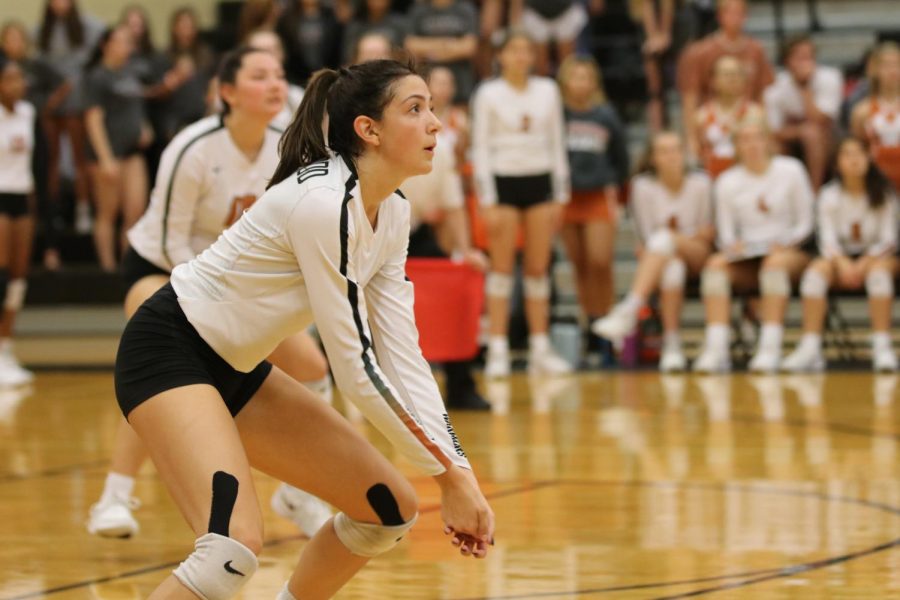 Receiving the other teams serve, Zoe Menendez '20 passes the ball up for someone else to hit. After graduation, Menendez will be heading to D1 school University of the Incarnate Word to continue her volleyball career.

The varsity volleyball team traveled out of the Austin area to battle against the Tomball Memorial Wildcats for the Bi-District Playoffs on Tuesday, Nov. 5. Many parents, athletes from the sub-varsity teams, and members of The Tribe traveled out to support the Lady Warriors. The team swept the Wildcats in 3 sets, claiming the title of Bi-District Champion.

“The mentality that every game could be our last is always there, especially for us seniors because we all don’t want the season to end,” Audrey Quesnel ‘20 said.

Beginning the first set, Zoe Menendez ‘20 founded the Warriors rhythm with a variety of serves while Quesnel assisted in points with kills from the middle. Tomball Memorial managed to break away from the Warriors’ intimidating offense and score multiple points. Peyton Ferree ‘22 broke through the Wildcats block and gained a ten foot line kill, forcing Tomball Memorial to take their first timeout, with the Warriors leading 17-7. The Lady Warriors made a few errors, handing points to the Wildcats, but the Warriors hit set point when Menendez got a kill from the opposite side. Ferree earned the first set for the ladies, 25-15, when she got a kill off the opponent’s defending block.

“This was my best game I have played the entire season,” Ferree said. “Towards the end I got too excited, the adrenaline got to me, so I made a few errors but I calmed down and I was back to my normal self.”

Tomball Memorial started the second set off with a serve but Menendez stole the first point and quickly gathered momentum for the Warriors. Adding points to the scoreboard, Abi Rucker ‘20 used her float serves to limit the Wildcats offense. The Warriors continued to stay ahead with blocks from McKayla Ross ‘22, kills from Abby Gregorczyk ‘21, and a variety of serves and dumps from Kenzie Beckham ‘21. Tomball Memorial climbed up the scoreboard by placing the ball in the Warriors defensive holes, decreasing the margin to 19-17. The Lady Warriors stayed calm and overcame the tight score with kills from Gregorczyk. Menendez earned set point for her team when she got a kill from the outside. Cracking under pressure, Tomball Memorials’ outside hitter shot the ball out, winning the set for the Warriors 26-24.

Maddie Gillispie ‘20 transferred over the energy from winning the second set into the third set with her powerful float serves. Pin hitters, Ferree and Menendez, earned multiple kills, pushing the Warriors’ score further ahead. With sharp coordination, the Lady Warriors continued to rack up points, not letting the Wildcats take the momentum. Tomball Memorial soon broke through the Warriors’ fast offensive tempo and stole several points, but the Wildcats handed the set point to the Warriors when their outside hitter killed the ball out. Gillispie came up clutch with a dynamic serve and took the final set 25-13.

“We fought for every point and deserved every point. We didn’t give as many points as we used to. We made [Tomball Memorial] work for their points,” Ferree said.

The varsity volleyball team will advance to the second round of playoffs where they will face College Park High School.