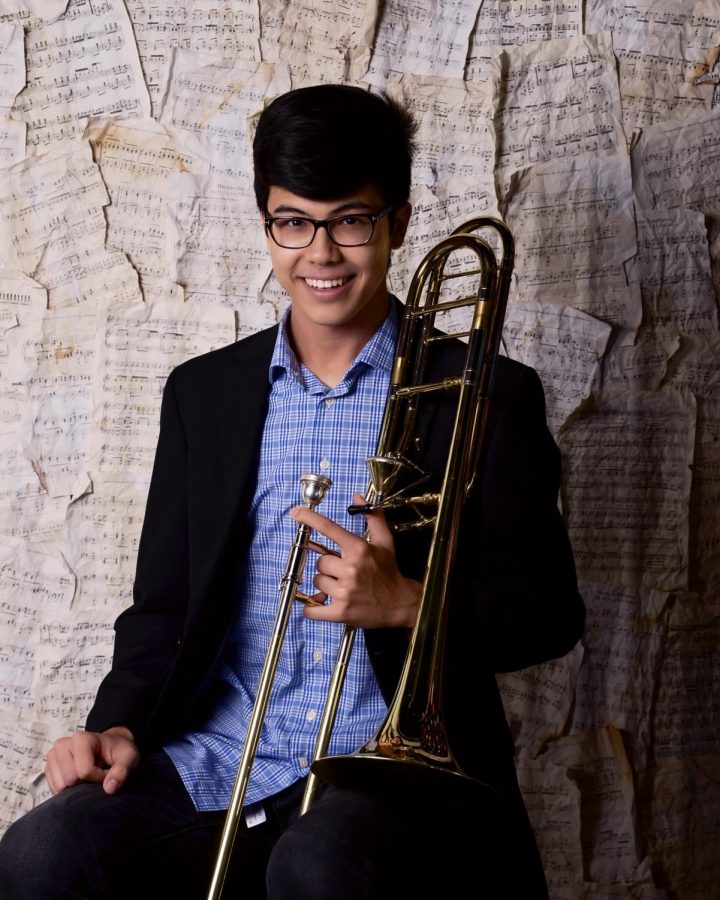 Slack smiles with his instrument in his hand. Photo Courtesy of Aaron Slack '20.

After weeks of practice and hard work, Aaron Slack ‘20 became first chair trombone in the Texas Music Educators Association (TMEA) All-State Jazz Band competition. Slack was constantly under pressure to succeed, but was able to stick with Westwood Band and jazz band, a subcategory of band,  through support from his loved ones and his passion for music. While he knew he had a talent for music, he did not expect to surpass the rest of his competition.

“I’m not gonna lie, I was really surprised when I first saw the results,” Slack said. “I saw it a day early because our director gets special results and he’s not supposed to show us, but he saw my placement and he freaked out and he called me over before the day even started. And when I looked at it I was like ‘Wow there’s no way I beat all these amazing people whom I know, and they’re all better than me.’ But I guess I had a really good audition and that was great.”

To achieve his kind of precision to rhythm and harmony requires dedication and hours of practice. Slack made this practice more enjoyable by mixing music he likes with his regular music.

“I play études maybe an hour or so every other day, squeezing in music I want to learn for fun, because for me homework comes before practicing,” Slack said. “And then a week before the audition was when you really need to grind and put in multiple hours a day, so you can get ready and prepare yourself.”

Slack stumbled upon his passion for trombone by chance. His dad wanted him to play the tenor saxophone and follow in his footsteps. However, incidentally, his sour experience with a middle school teacher for tenor saxophone caused him to pivot towards the trombone.

“I looked for an empty line [at the instrument showcase] that didn’t have anybody in front of it and one of them was trombone,” Slack said. “I went over there and the guy was like ‘Okay just pick up the mouthpiece, put it on top of your lips, and buzz into it. Then plug the mouthpiece into the instrument and then move the slide with it.’ I actually had a lot of fun and the guy was super nice. These were pretty much the only reasons why I chose trombone.”

Slack recognizes that there are many differences between Westwood Band and jazz band, including the variety of instruments, such as saxophones and trumpets, as well as the difference in competitiveness.

“In Jazz Band, there are usually far fewer people that audition against each other,” Slack said. “It’s typically less competitive by a little bit, but there are usually more people that are really good at it when you get to the state level. I really enjoy the normal band and orchestra as it is great to play along with and listen to, but I think jazz band is where all my passion really lies.”

Along his journey, Slack had support from his friends, family, and teachers, who pushed him to do better and persevere through the tough times. His family supported him and helped him stay committed each time he wanted to give up. In order to motivate him, his friends gave him a bit of friendly competition whenever they were learning new music because he would always practice and try to play better than them.

“I have a lot of skin conditions and stuff, so it really burns for me to go outside for long days and hours,” Slack said. “So I almost quit band my freshman year, but my mom was like ‘No you should stay with it because you really enjoy Concert Band.’ The band directors and my private teacher helped me and pushed me to keep on practicing.”

Despite almost quitting band three times, Slack’s family encouraged him to stick with jazz band and Westwood Band until he graduates. His hard work during the freshman and sophomore years paid off when he finally made the first chair in All-State Jazz Band.