Cheating Is An Epidemic In Schools Across The US 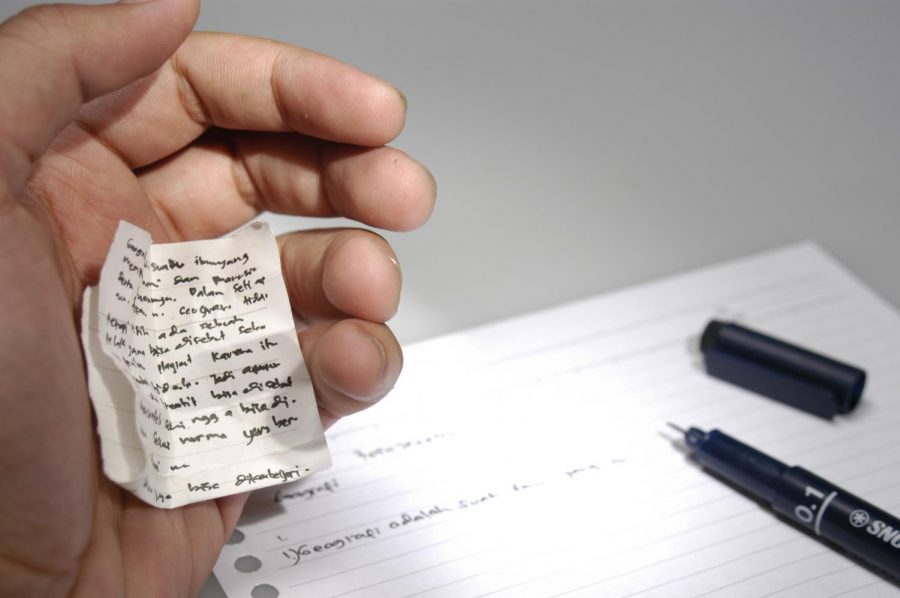 Cheating runs rampant in schools across the world. Part of the recent rise in cheating has been attributed to increased accessibility from technology, as well as the continued score-focused environment of schools.

Cheating has always been an epidemic in schools across the United States. Unfortunately, because it is hidden beneath the wraps and people refuse to acknowledge it, the stigma around cheating has never changed. In recent years, cheating has dramatically increased, making it near impossible to combat. At the same time, it has become extremely normalized. Selling test answer keys, taking pictures of quizzes, and sending homework answers to friends has become so common that most students aren’t scared of getting in trouble anymore and continue to cheat over and over again.

Just recently, some students at Westwood were caught cheating, resulting in disciplinary action taken not only against them but against everyone taking the same class. The academic dishonesty of some led to a remaking of the quiz that ended up being more difficult than the original, causing many other students to fail it. Meanwhile, the cheaters were allowed to take the easier original quiz without implications. School officials are not afraid to take action against plagiarism and cheating, but this enforcement is failing to scare students into behaving while forcing others to pay for the consequences as well. For example, officials give out referrals or even fail the student. However, they fail to recognize that other students are also affected by cheating and do not address other consequences. They dole out punishments unfairly to everyone, rather than going to the root of the cheating problem.

Instead of stopping, students have simply learned to be sneakier with their cheating methods. Cheating has become a style of art that is carefully planned and executed. For example, in the 1940s, 20 percent of students admitted to cheating in school, while today, 75 percent have admitted it. One-third said they had plagiarized by using the Internet. The new methods have made it easier to cheat and created an unbalanced arena for all students. It’s simply not fair anymore.

The culture of cheating has grown into an empire and it seems like there is almost no way to stop it. Despite the encouragement not to cheat, despite the increased test and quiz security, despite the severe consequences put in place for cheaters, students continue to pretend that they deserve the answers more than anyone else and that they don’t need to put in the blood, sweat, and tears that other students put into earning that A on a test. Cheating has put an immense amount of pressure on non-cheaters to do as well as cheaters.

No school wants to admit that they have a cheating problem, but it’s the first step to recovering from it. Rather than finding effective help against cheating, many schools aren’t caring enough and are wasting resources by installing methods against cheating that don’t even work.

However, the taboo nature of cheating shouldn’t prevent us from stopping it. Using positive reinforcement and educating children about the benefits of being honest can make students less tempted to cheat. Teachers and schools also obviously need to stay much more vigilant and keep test and quiz answers safely locked up. This will not only ensure that no one gets the answers, but also that catching cheaters when they attempt to steal answers will be easier.

These methods are already being implemented in many schools, but one of the most important steps to solving cheating is a reform to the education system. Our education system right now is focused on grades and academics rather than critically analyzing the world around us. Because of this score-focused environment, students are more prone to cheating in general and strive to get the highest grades. Of course, a change on this massive level would require extensive planning and debates to successfully implement.

Above all, the biggest step towards curbing cheating that schools can take is starting a dialogue about it. Talking about a taboo topic like cheating will only help with preventing it. Westwood has a cheating problem and we all know it. Now it’s time that we properly discuss fair solutions rather than punishing others for the mistake of one student. For example, schools shouldn’t be making tests harder for everyone just because one student cheated. Instead, removing the student from the situation and only giving them the consequences ensures that the test is fair for everyone. Having a fair world means extinguishing this epidemic, but doing it the right way.