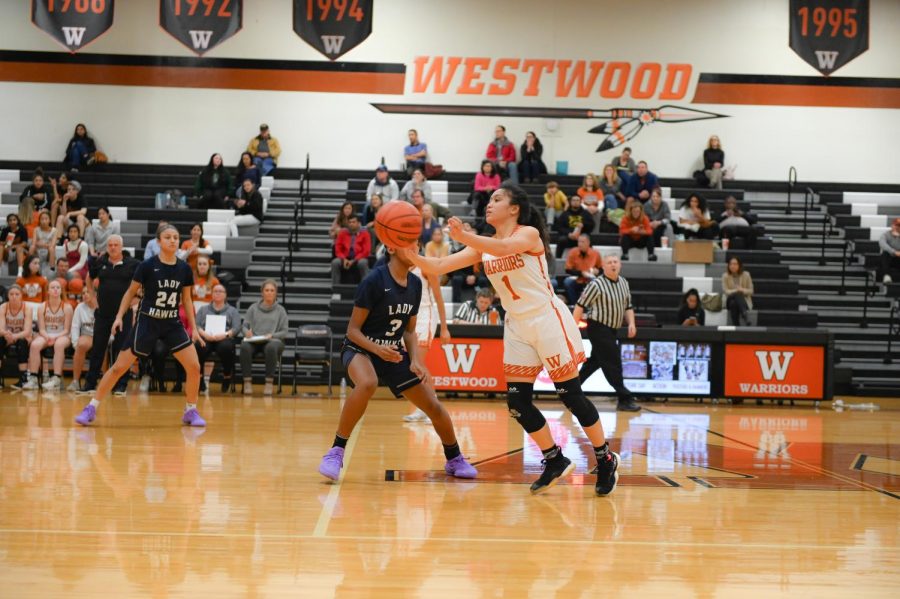 The varsity girls’ basketball team squared off against the Hendrickson Hawks on Tuesday, Dec. 10, but despite their tough efforts, the ladies fell to the Hawks, 53-52, in a fast-paced game.

Hendrickson started the first quarter with the ball while the Lady Warriors used their defense to pressure the Hawks to pass and make unnecessary shots. Anisha Chintala ‘21 took the lead with two-pointer as she pushed through Hendrickson’s defense. The Hawks countered the score by making both of their free throws. Center Ginna Grant ‘21 found a rhythm for the team as she made back-to-back layups, which forced Hendrickson’s head coach to take the first timeout of the match. Desi Davalos ‘22 and Mahogany Wright ‘23 amped up their defense by stealing the ball and proceed to run layups, bumping up the Warriors’ score. Chintala scored a three-pointer before time ran out ending the first quarter 12-4 in the Warriors favor.

“I think we can work harder in practice and practice to finish plays,” Caroline Hand ‘22 said. “We need to continue to grow as a team and learn to execute plays without turning the ball over.”

Beginning the second quarter, Henderickson trailed behind the Warriors back with free throws and quick layups. Grant and Wright pulled the team ahead with a variety of baskets from across the court, making the Hawks’ head coach use a timeout. After a small timeout, both teams raised their aggression with a high amount of fouls and charges. On offense, Grant gained multiple rebounds and scored over the Hawks’ towering defense while the Warriors guarded the opponents’ basket with a box-set play. Henderickson tried to decrease the margin with multiple free throws and closed the second quarter 25-21, with the Warriors still in the lead.

Starting the third quarter, the Warriors opened up with a clever offensive play, giving Grant the opportunity to score again. Henderickson used free throws and shots around the court to catch up to the Warriors, 27-26. After head coach Doug Davalos called a timeout, Davalos came in clutch with a three-pointer; meanwhile, Peyton Halley ‘21 and Chintala silently stole the ball from the Hawks. Tensions became high in the gymnasium as both teams fought for possession of the ball, resulting in fouls from both teams. Using smooth transitions and communication, Chintala scored a three-pointer off the backboard while Wright skipped through the opponents defense, which resulted in a boost in the team’s energy. The Hawks, desperate to keep up with the Warriors, scored points off a numerous amount of free throws, but the ladies were able to hold the lead, 41-37.

“Our communication on our offense and defense can improve and practice more to fix our errors and not make so many,” Wright said.

Starting the final quarter, Grant proceeded to get fouled, resulting in her making both free throws. The Hawks slowly built momentum as they gained points with free throws and scoring layups around the Warriors’ defense. As the clock was running down, both teams increased fouls, desperate to get their hands on the ball. Henderickson were able to lay their hands on the ball and scored a last second layup at the buzzer, marking the final score to be 53-52 in the Hawks’ favor.

“We can’t ever stop playing and we have to keep that in mind. We have to keep up the pace from the beginning to the end,” Desi Davalos ‘22 said. “We thought that we had [the win] secured but they came back and we weren’t ready for that.”

The Lady Warriors will face off against the Vista Ridge Rangers on Friday, Dec. 13.