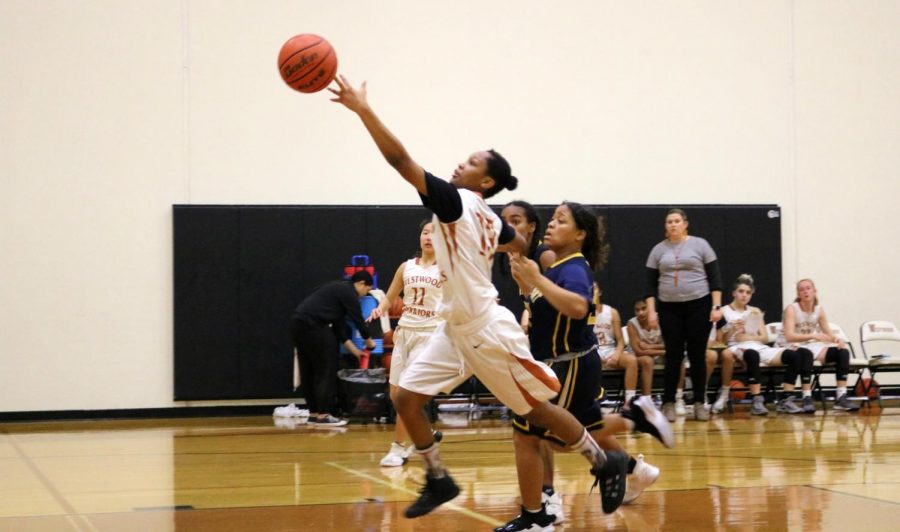 Loosing her grip, Kl'che Brown '23 attempts a layup. Brown was a significant defensive player for the team and helped push forward for an early lead.

In a close game, the freshman girls’ basketball team squared off against the Stony Point Tigers on Tuesday, Jan. 14, ultimately coming short, losing by a score of 39-34.

The match-up began with a slow start for the Lady Warriors, as the Tigers won the tipoff and scored a two-pointer to seal the first points of the game. Retaliating quickly, multiple rebounds from Olivia Yang ‘23 and a layup from Ali Heinricy ‘23 pushed the team forward offensively to take a 6-3 lead. Clear communication made for clean passes between Kylie Wardlow ‘23, Yang, and Heinricy, keeping the ball in play with ease. A two-pointer from Kl’che Brown ‘23 brought the Warriors ahead, though a strong defense presented by the Tigers effectively perpetrated the momentum the Lady Warriors had built up, ending the quarter at 13-11, with the Warriors behind.

“The strategy was to be aggressive and attack Stony Point’s defense through driving hard and making smart passes,” Yang said.

Struggling to recover throughout the second half, the pressure was on for the team to elevate in aggressiveness, in turn dropping points to the Tigers who would take advantage of the Warriors’ many fouls. With a lead slipping out of the Lady Warriors’ grasp, the score remained close, and as they attempted to defend their opponents’ shots, the quarter would come to a close at 14-14.

“We knew Stony Point was gonna be a tough game, but we had to [remember] that their level should not define how we play. Critical moments are when it’s most important for us to encourage each other as a team, so we can feed off of each other’s energy,” Hannah Shen ‘23 said.

Throughout the second half, several successful free throws from Victoria Brown ‘23 still could not give the Warriors the drive they needed to bounce back, with the Tigers holding a 26-17 lead. In the final minutes, two-point shots from Yang and Heinricy launched both teams into a battle at 31-31, but ultimately would not be enough to get past the Tigers, concluding the game at 39-34.

The team takes on the Cedar Ridge Raiders on Friday, Jan. 17.