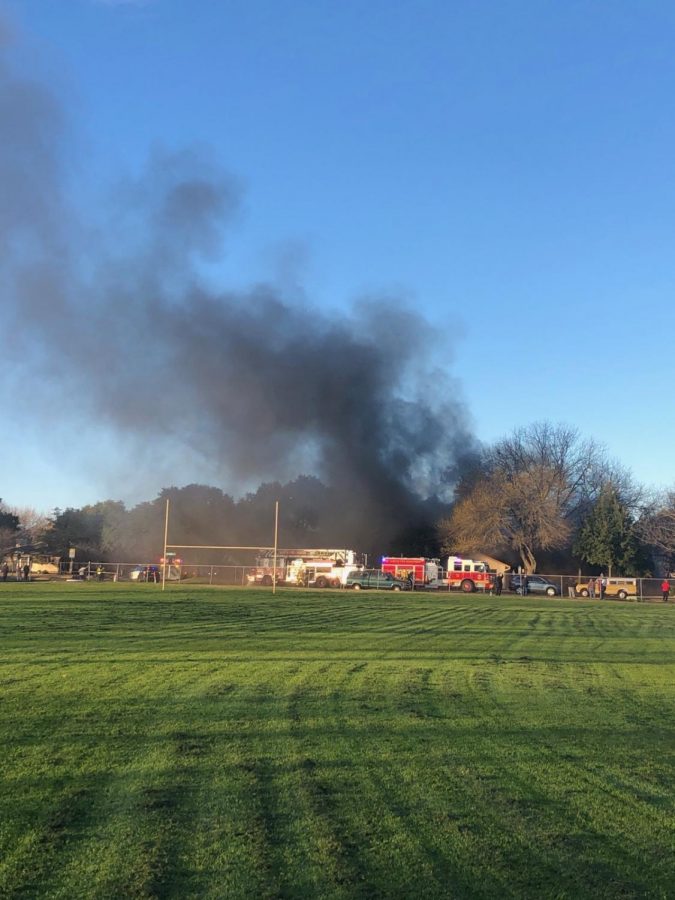 The fire on Schoolhouse Lane created a haze that could be seen and smelled from hundreds of yards away. Photo Courtesy of Mary Miller '20.

On Wednesday evening, Jan. 29, what started as a small house fire escalated into a blaze engulfing the entire residence of 10900 School House Lane near Anderson Mill. The fire was reportedly started by a heating lamp within a greenhouse inside the home. Players and coaches on the girls’ lacrosse team were among the first to respond to the emergency.

“We saw smoke coming up and at first it just looked like a fire pit–pretty average smell like someone was having a barbecue,” lacrosse player Silvia Ciacci ‘23 said. “And then we saw clouds getting bigger, and the smell and smoke kept increasing, so we began to worry a bit.”

After girls on the team made coaches Lewis Wright and Jamie Booth aware of the growing emergency, the coaches took action and called 911 while making sure the occupants in the home were safe.

“[Coach Booth] had his phone out and started to call 911, and as I started to jog towards the house I heard a woman scream, and that’s when I sprinted and jumped over the fence,” Coach Wright said.

The house was occupied by an elderly couple who suffered an estimated $150,000 in damage to their property and belongings.

“The husband wanted to go to the backyard and use his water hose on the fire. I went after him and after seeing the fire engulfing the whole back wall of the house, I convinced and helped him exit the area,” Coach Wright said. “After that, we just waited with the occupants until the fire department arrived.”

“I thought of the twenty-plus girls who prompted me to act, and I give them all the credit wishing I acted even sooner,” Coach Booth said. “I was able to provide [a video of the fire] to another family member and she told me that ‘not all heroes wear capes. Sometimes they wear whistles.’”