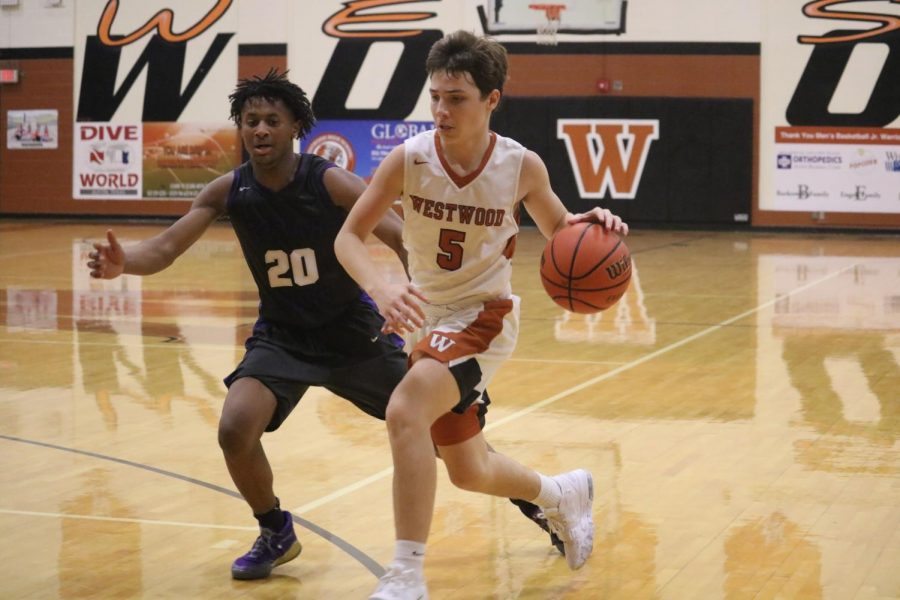 The JV boys’ basketball team suffered a tough loss against the Cedar Ridge Raiders on Friday, Jan. 17. The Warriors fought hard, but eventually lost by a single point, 47-46.

“We played hard and had pretty good defense the whole game,” coach Drew Rigney said. “We rebounded the ball well but we just didn’t have the ball fall for us at the end.”

The Warriors started the game off strong, with Samer Salman ‘21 scoring the first point of the game with a free throw. The Warriors reached double digits first with a layup from Eric Cadar ‘22. A 3-pointer from Salman gave the Warriors a steady advantage by six points, and the Warriors kept up their lead with efficient defensive formations, challenging the Raiders’ shots. The Warriors triumphantly ended the first half 25-16.

“It was really intense, the entire time we had a really good defense,” athletic trainer Laci Branden ‘22 said.

Despite the Warriors’ rebounds and fluent passing in the second half, the Raiders started to retaliate with multiple layups, eventually catching up 25-25. Vinay Majjiga ‘22 managed to regain the lead, and the stadium became heated just before the third period started, with several fouls and arguments arising as the players grew more aggressive. Despite shots from Karsten Bresser ‘22 and Glen Liu ‘21, the Raiders started to pull ahead once more. With nine seconds left on the clock, Josh Choy ‘22 scored a 3-pointer, nearly closing the gap 45-44.Both the Raiders and Warriors were subsequently awarded free throws as the teams raced against the clock. Salman’s last shot missed as the buzzer rang, and the Warriors lost the game 47-46.

“We were up [big] in the first half, and we definitely could have had a chance to close it out, but we just came out a little weaker in the second half,” Choy said. “But we’ll get them next time.”

The Warriors’ next game will be against the Hawks at Hendrickson High School on Tuesday, Jan. 21.