‘Star Wars: The Rise of Skywalker’ Brings Cherished Saga to a Satisfying Conclusion 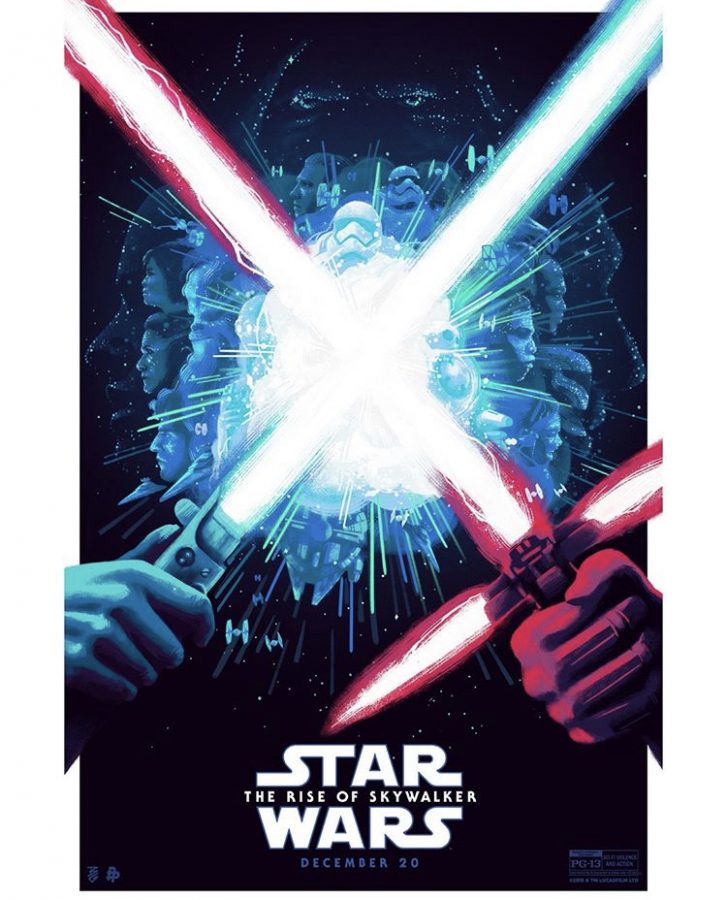 The new film is the last of the current saga, ending the series on a good note. Photo Courtesy of @starwars.

Ever since Disney acquired the company Lucasfilm in late 2012, die hard Star Wars fans were eager to find out what the plans were for the future of the beloved franchise. Since then, it’s been an extremely bumpy road with all Star Wars content released since then either being a smash hit or extremely divisive. Disney’s brand new trilogy of Star Wars films came to an end with episode nine, entitled The Rise of Skywalker, and it fortunately lives up to its enormous expectations to deliver a satisfying conclusion to everything Star Wars has been thus far, as well as this latest trilogy.

One jarring problem the movie suffers from quite a bit is the large amount of course corrections made after the poor reception its predecessor, Star Wars: The Last Jedi received, and all were poorly handled. Many brand new plot points seem almost out of place and make some aspects introduced in the previous film insignificant, which can be extremely frustrating due to how painfully obvious it is that this was the intention. It’s one of the largest problems the entire trilogy as a whole has, which is that clearly there was no planned roadmap for how it was all supposed to plan out. Each of the three movies was initially to have their own director, but Colin Trevorrow, the original director of episode nine, left the project due to creative differences, leaving Star Wars: The Force Awakens director J.J. Abrams to pick up the reigns once more and helm his second Star Wars film. This lead to many discrepancies between his films and episode eight, directed by Rian Johnson, that could’ve been ultimately avoided. That being said, Abrams does a fantastic job bringing the trilogy to a close with what he ended up able to work with, closing out several arcs set up from the beginning in satisfying ways. One of the most compelling storylines of the trilogy was that of Adam Driver’s Kylo Ren, who goes through an incredible journey throughout the three films, and Abrams explores him prominently in this film, and brings his story to an end in an incredibly satisfying manner. The three heroes of the trilogy, Rey, Finn, and Poe, are finally all brought together for this film, and while this is exciting to see and their chemistry as a group is amazing, it’s odd to think that the final film of the trilogy is the only time we get to see all of them on screen at the same time considering how great they all work as a team.

One major roadblock The Rise of Skywalker was presented with was the situation of how to handle Carrie Fisher’s Leia, as Fisher tragically passed away in 2016, problematic considering her character was alive and well at the end of the last movie. Abrams and company managed to work her character into the movie by reincorporating unused and deleted footage from the previous two movies to bring her back to life for a very limited role. They definitely did the best they could with what little material they had to work with, but it all still comes off as feeling a little bizarre and doesn’t feel quite right. Leia isn’t the only character brought back to life for the movie, as under completely different circumstances, the iconic Emperor Palpatine, played by Ian McDiarmid, also makes a triumphant return for this movie. Considering this character was killed off at the end of episode six, it seemed a little strange that he would randomly return, and it’s not really explained very well how it even happens, but McDiarmid is as charismatic in the role as ever, and he fits into the story relatively well. While it’s a little disappointing that Kylo Ren didn’t step up to become the primary antagonist for this film, getting to see the Emperor again is incredibly satisfying, and he’s not the only classic character to make a reappearance. Billy Dee Williams returns as Lando Calrissian, a character absent for the rest of the trilogy, and while his screen time is relatively limited, his return is a welcome one. On top of that, there are countless cameos from old characters that help bring all nine main Star Wars movies full circle and contributes very positively to bringing it all to a close.

Star Wars: The Rise of Skywalker struggles with problems that could’ve been easily avoided through more foresight for the entire trilogy, but it manages to mostly overcome some of these setbacks to deliver a satisfying conclusion to everything Star Wars has been for the past 40 years. It’s exciting to think what the franchise will evolve into now that it has shed itself of its traditional format.