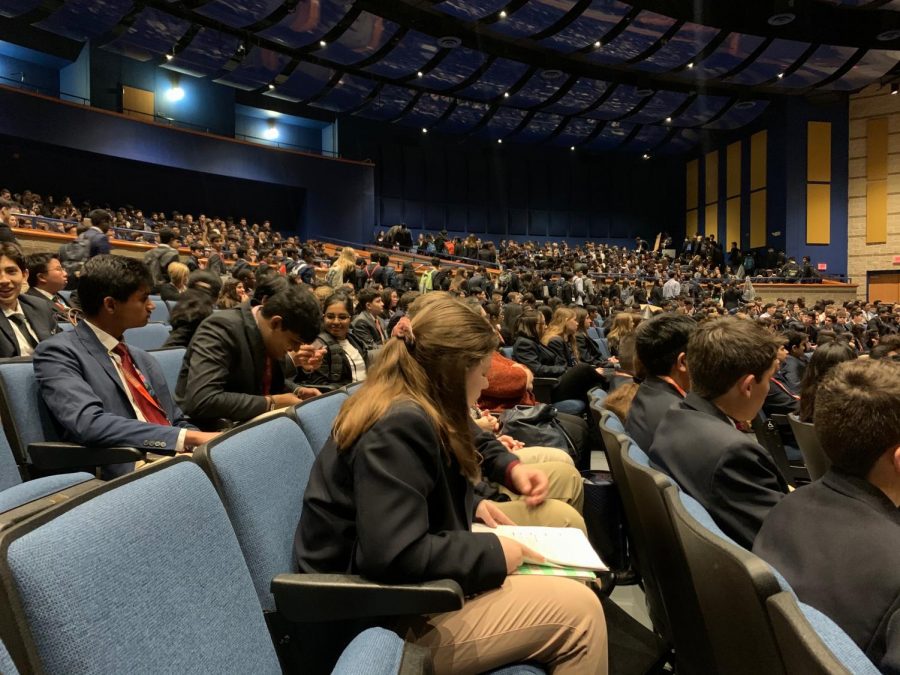 All the students gather in the auditorium for the closing ceremony and awards.

It was still dark when over 300 Distributive Education Clubs of America (DECA) students arrived at school at 5 a.m. to attend the District Career Development Conference, the first competition on the path to Internationals. Students boarded the school buses, eagerly waiting to compete in their events.

“District, as always, is one of the most emotional yet fulfilling days.” Anika Chokhavatia ‘21 said.  “I was a bundle of nervous excitement prior to my event, and the wait before the award ceremony was tense. District is only the starting place of many of our professional careers. I’m so grateful to DECA that I get the opportunity to attend these competitions and gain valuable insight into the business world.”

The conference started with the opening ceremony where the District 5 Director, Mr. Stewart Burns gave a short speech. Shortly after, students dispersed to find their competition rooms. However, due to miscommunication errors, many events ran late and the layout of the competition rooms became confusing.

“In the four years I’ve participated in DECA, I think this year was one of the more disorganized years because typically roleplay events happen before presentation events, but my team’s call time was way earlier than we expected,” Chris Fan ‘20 said. “On top of that, we couldn’t find our room because the maps weren’t posted yet and it was after running around for 10 minutes that we finally found our room.”

After most of the events had been completed, members enjoyed a lunch of tacos, chips and salsa, and decadent brownies and cookies. Students then had an abundance of downtime to finish homework and hang out with their friends before the closing ceremony at 2:30 p.m.

“There was a lot of downtime before our event which allowed us to run through our important points a few times which made us feel more confident during the actual competition,” Aashi Vishnoi ‘21 said. “Lunch was a lot of fun because it was a time when we would hang out with our friends and meet new people from other schools.”

District officer candidate speeches were given before the awards were announced. 245 members from the chapter advanced to state, surpassing the 214 qualified members last year.

“As always, it feels very inspiring to see the students grow and learn,” sponsor Mr. Jeffery Siler said. “It’s also humbling to be part of such an amazing organization and around such great kids. Also just great anticipation for where state and beyond takes these students as well as what they’re going to learn and apply in their life. So it’s just a really exciting time and I’m happy to be a part of it.”

The next DECA competition will be the State Career Development Conference on Feb. 20-22 in Fort Worth, Texas.