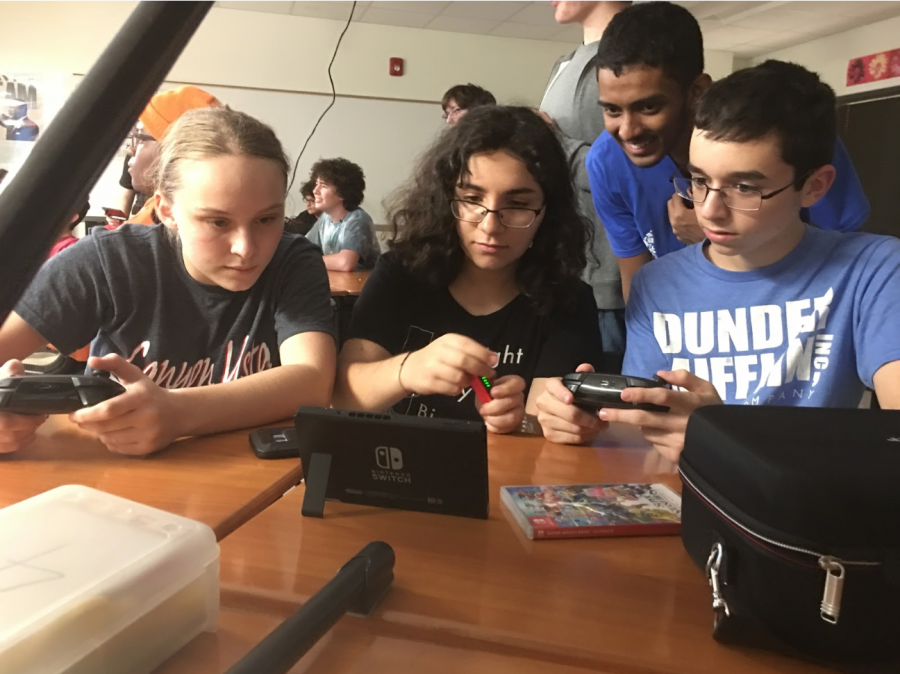 Katherine Dempsey '24, Imran Sohail '21, Brady Richards '23, and Sophia Konstantinou '22 all close in for a triple player game on the Nintendo switch.

Members from all grade levels are “button mashing” up a storm after school. Every Thursday, Mr. Bradley’s room shrouds away their history textbooks and becomes a virtual battlefield for one of the most competitive video games ever released: Smash Bros.  It’s a multiplayer, crossover video game that interconnects Nintendo’s entire universe into one epic blazing, brawl of chaos.

Players can battle dozens of iconic neon characters in an ultimate fleet of fast-paced competition. One member credited the club for being “The Original Video Game Club” but was later changed to the “Smash Club” due to the game’s exploding popularity. Though mostly known to attract boys, there are quite a few girls which attend as well.

“Since I was a freshman, I just attended all the tournaments and was really invested into it.” President Olivia Bowen ‘20 said. “Smash Bros is one of those games that anyone can pick up and play, but it also has so many layers. You can be both competitive and casual, it really brings people together.”

With the Smash Club becoming another culprit for its sleek color schemes and simple gameplay objectives, players can add a maximum of eight opponents per round.

Some move graceful and sword-slick with a shield, others can soar high above the chaos, and many come with a pounding temper to crush their challengers. In the event of battle, the entire Nintendo universe is the players toolbox, across its flaming lands, and within its dwellers.

“Incineroar is the perfect balance between raw power and just spamming buttons,” Austin Grimaldi ’23 said. “Because you can just spam the match and win by pure luck,  but whenever I do that people get mad because it’s annoying, so I try to mix it up with some combos”.

Nintendo’s latest handheld device, the Nintendo Switch, has also been an upgrade for the club by providing a significant “switch” in scenery. Competition is now scattered throughout the room, with members assembling in small groups to share devices and sportsmanship.

“There’s all sorts of different backgrounds hear,“Club Sponsor Carl Bradley said. “They may not be friends from outside of here or talk to each other outside the club, but it seems like a very normal medium they use to play and get along.”

As a traditional club highlight, members look forward to organizing and competing in there own official tournaments in the Great Room. Twice a year, they gather for an afternoon of blazing glory or crushing defeat, but upon entry, there is one small fee.

“If players each bring two cans, you can collect quite a bit of food,” Mr. Bradley said. “It really gives people opportunities to help with organization and socialization other than just button mashing because it really is up to them what they are going to do.”

They held their first competition before Thanksgiving break and plan to host one more before spring. Collected cans are donated to the food bank, as smash tournaments also double up as food drives. It gives their members a break to reach out to their community, even when it seems life can sometimes be firing its own battles.

“Smash brothers allows you to take your anger out in ways that doesn’t actually hurt people in real life,” Grimaldi said. “If you have a bad day, you get a bad grade, someone calls you a name, if you’re frustrated at life, you can take it out on your friends in a way it doesn’t ruin friendships”.

Competition is always for the best of fun, with blade bending schemes continuing to attract new opponents throughout the year. Members come anxious to test their cosmic strategies, and simply let off steam from academics. But no matter enduring new player blues, or being the smash champion, it’s the excitement shared among its members  for this pixelated universe that will never be defeated.