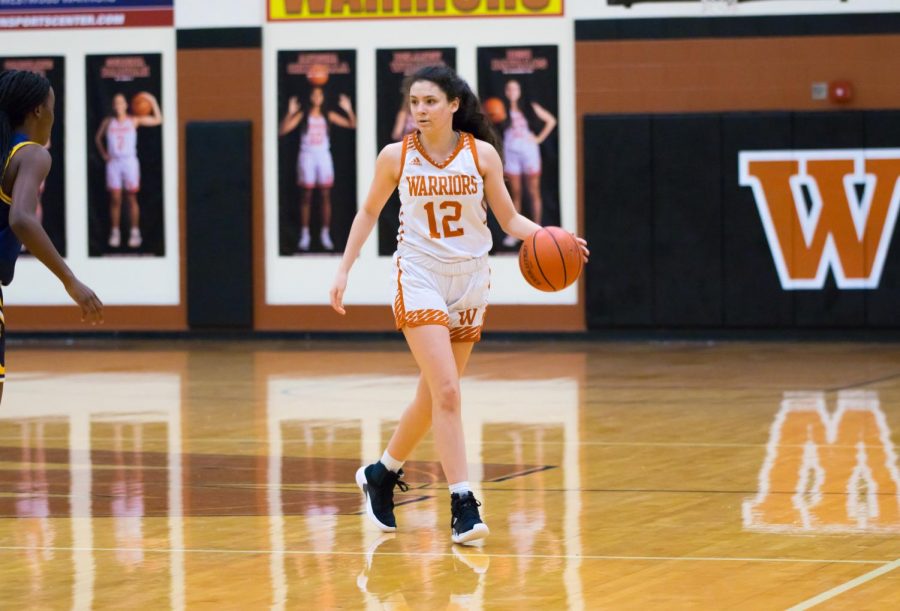 Dribbling the ball down the court, Desi Davalos '22 scans the court for an opening. Davalos would go on to make a three-pointer during the first quarter which brought the score to 10-2.

The varsity girls’ basketball team faced off against the Stony Point Tigers on Tuesday, Jan. 14, and reigned victorious 54-52. The game day theme was Future Warriors Night, a night to show Canyon Vista and Grisham lady athletes how the basketball program runs. During halftime, the junior athletes played a game of knock out to entertain the spectators.

“Stony Point came out a lot stronger than the first time we played them. Last time we started off strong and kept the lead but this game was different because we started off really strong, but then we let them get into a rhythm and score more. They are a really good and face paced team to play against,” Desi Davalos ‘22 said.

The Lady Warriors opened strong with Ginna Grant ‘21 won the tipoff and passed to Anisha Chintala ‘21, who earned the first point of the game with a layup. Davalos followed up Chintala with a three-pointer, raising the momentum for the Lady Warriors. The Lady Tigers pushed forward through the Warriors box defense and scored their first point with a layup. Davalos, quick to counter, made another three-pointer; meanwhile, the Tigers buffed up their defense to full court to pressure the Warriors. Captain Annalise Galliguez ‘20 delivered a pass to Emma Zion ‘21 around the opponents’ man on man defense, and she managed to score. The Lady Tigers used their defense efficiently by blocking the Lady Warriors’ passes and attaining rebounds while running the ball across the court to score. The Tigers decreased the margin, 18-14, as the first quarter came to an end.

“We’re mentally focused and if we aren’t then we start off bad. If we are all focused and we communicate and have good passes and shots, [then] we will have a great start,” Serena Baruah ‘21 said.

As the second quarter began, the Warriors erupted with aggression leading to fouls, which the Lady Tigers used as an advantage and scored. Trying to keep the lead, the Lady Warriors used confusing offensive plays and weaving passes, but the Lady Tigers struck back by stealing the ball and making a quick layup to tie the game. Davalos and Galliguez fought to stay ahead by running layups and scoring on free throws, while Kooper Giles ‘20, who recently came back from a knee injury, became a significant defensive player for the team. The quarter ended 28-22 with the Warriors keeping the lead.

“It’s really hard coming back from a knee injury,” Giles said. “I have to make sure I’m always on my A game and I can’t take breaks just because I got hurt.”

Refreshed from the halftime break, the third quarter began with Galliguez taking  possession of the ball, but the Lady Tigers stole it back and used a layup to score. Starting to build momentum, the Tigers began to add points to their score with free throws and taking advantage of the Warriors’ errors, soon tying the score 30-30. Mahogany Wright ‘23 turned the momentum to the Lady Warriors’ side by stealing the ball on multiple occasions, jumping to rebound the ball, and ending plays with layups. The third quarter ended with the Warriors hanging onto the lead 40-36.

Keeping up the momentum from the last quarter, the Lady Tigers began the final quarter with a three-pointer, decreasing the score gap. Desperate to stay ahead, Galliguez and Giles scored with layups and free throws, but the Lady Tigers fought back with their own free throws and three-pointers. Tensions started to rise in the gym as both teams began to get more aggressive while trying to get possession of the ball. The Lady Tigers took the lead for the first time that night with their complicated offense. Galliguez led the team forward and claimed the lead back with a three-pointer. Both teams began to trade points, not letting the other widen the point gap, and Chintala and Wright brought the Warriors in the lead with free throws caused by the Lady Tigers’ physical defense. With seconds ticking down on the clock, the Lady Tigers fouled Davalos who pushed the Warriors ahead with a successful free throw. The Lady Warriors played a threatening defense which turned out to be fortunate as the game ended 54-52 with the Warriors coming out on top.

“We all played really tough and defense and we didn’t let anyone come in and shoot,” Baruah said. “We slowed the ball down on offense which led to us shooting more and getting offensive rebounds.”

The Lady Warriors will face of against the Cedar Ridge Raiders on Friday, Jan. 17.