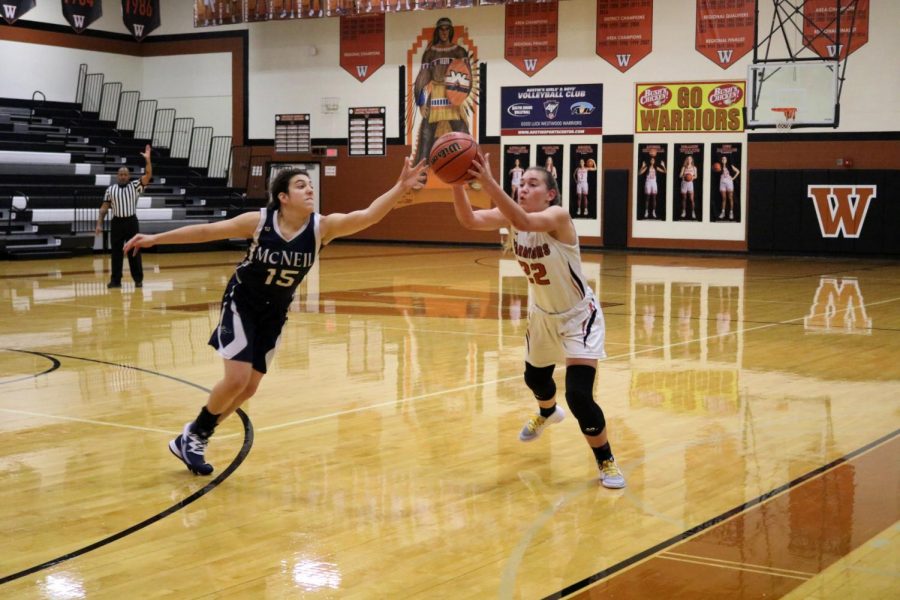 Within inches of a defender, Gabbi Wallace '22 loses her grip on the ball as she attempts to move it down the court. Wallace was a top scoring player, helping the Lady Warriors gain an early lead and run with it.

The JV girls’ basketball team reigned victorious against the McNeil Mavericks on Friday, Jan. 31. The team showed off their impressive offensive skills, ending the match with a solid score of 46-24.

While the initial tip-off went to the Mavericks, Izzy Brown ‘22 quickly scored the first layup of the game. More shots from Brown and Gabbi Wallace ‘22 kept the Mavericks on their toes, but Laura Gillmeister ‘23 broke past their tight man-to-man defense with a well-aimed layup. However, the Mavericks started to catch up with multiple free throws, but the Warriors came out of the first half with a close lead, winning by a score of 18-15.

“I think the first half was kind of rough, but leaning towards the end we started playing really well as a team,” Emma Goolsbey ‘21 said. “I’m glad we got the win.”

The second half started off with a free throw from Goolsbey and more layups from Wallace and Brown, maintaining the Warriors’ lead throughout the third quarter. Makenzie Ward ‘23 scored a three-pointer from near the sidelines, giving the Warriors a nine-point advantage. The fourth quarter became fast and aggressive, especially as the Mavericks adopted an offensive strategy. Nevertheless, the Warriors secured their lead with a speedy, well-oiled sequence: Kaylina Medina ‘22 earned a point with her first free throw, and Gillmeister swiftly rebounded her second, shooting a put-back immediately. Medina took back possession of the ball and scored once more with an assist from Wallace. The Warriors then safely played out the remaining one minute, keeping the ball out of the Mavericks’ reach. Brown’s successful layup went in just as the last buzzer rang, ending the match 46-24 in the Warriors’ favor.

“I thought we could have not fouled as much,” Ward said. “But overall we had a really good game offensively. I was nervous that I was going to miss [that three-pointer] but I’m glad I made it.”

The Lady Warriors’ next game will be against the Vandegrift Vipers on Friday, Feb. 17.