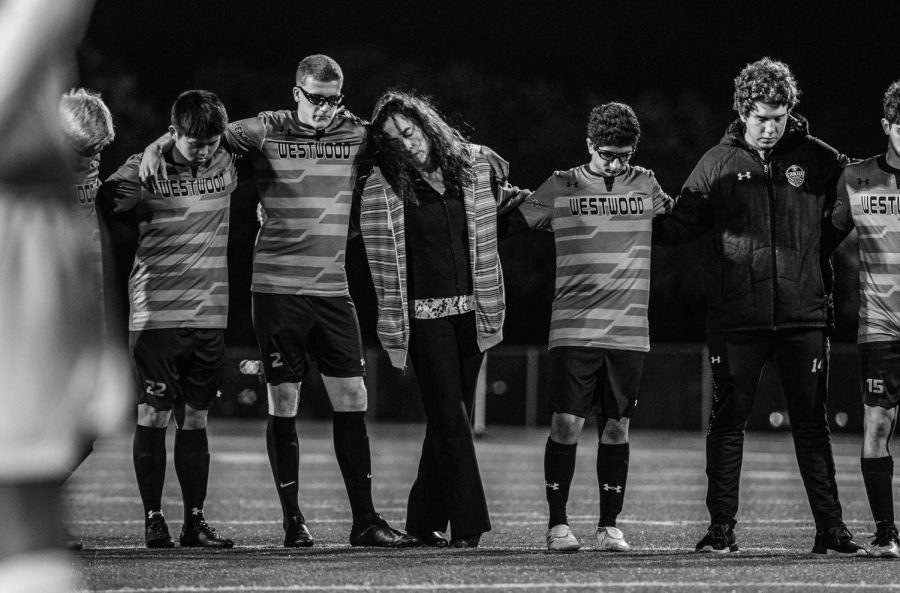 Louis Niemerg '21, his host mother, and the team stand for a moment of silence to honor his brother who passed away the day before the game. During the game, Niemerg scored one goal and honored the life of his brother.

On the cold and windy night of Tuesday, Feb. 4, the varsity boys’ soccer team caged the Leander Lions, shutting them out 5-0, in a game that honored and celebrated the life of Justus Niemerg, who passed away last weekend.

The mood quickly changed from excited to mournful for the varsity boys’ soccer team this week. Over the weekend, news broke out that Louis Niemerg’s ‘21 brother, Justus, passed away in his home country of Germany. Louis had the option of returning home to Germany, but decided to stay with the team, his “adopted family”. Both teams honored Justus before the game by gathering around the center circle, with arms linked and giving him 21 seconds of silence. 21 is Louis’s and was Justus’s number.

The Warriors wasted no time getting on the scoreboard, scoring three times in the first five minutes. After a back and forth in the first couple of possessions, Cesar Frias ‘20 sealed the edge and delivered a hook pass to the waiting Nikola Djordjevic ‘20, who struck it past the Leander keeper. The Warriors got the ball right back, with L. Niemerg flying by Leander defenders. He sent the ball back into the center of play and Djordjevic headed it in, quickly making it 2-0. Then, after Frias forced a turnover, L. Niemerg ran by several Leander defenders and shot a strike that found its way to the back of the net. L. Niemerg touched the 21 on his chest and pointed to the sky; “That one was for you mein bruder [my brother]!” , he said as he was greeted with hugs by his teammates.

“As hard as it was, I tried to ignore the outside distractions and just play the game (Justus) would’ve wanted me to,” L. Niemerg said after the game. “When I scored, all my emotions came out and at that moment, I knew he was up there somewhere up there watching me. I am sad that I can’t be with my family, but my teammates reminded me how much of a family I have here. I put my all into this game, and to see how much love they gave to me and my family meant so much.”

For the majority of the remainder of the half, the Warriors kept the ball in enemy territory but couldn’t quite find the net, with shots from Frias, Djordjevic, and Theo Givens ‘20 saved by the Lion goalie. When it looked like Leander had momentum, the defense led by Ben Forshay ‘20 and goalie Justin Lang ‘20 ensured it was short-lived. Lang only played one half but saved every shot as he finished with four saves on the night. Long attacks and good defense kept the ball on Leander’s side, but unfortunately they couldn’t add to their lead before the half, as they entered the break still leading 3-0.

The second half began with Leander showing signs of life. The Lions started playing aggressively on defense and stopped almost every Warriors attack, but Luca Cipleu ‘21 and Frias flew across the field to get the ball back in the Warriors’ possession. When momentum came back to the Warriors, Givens took advantage of a turnover, and with a great pass setup by L. Niemerg, fired in the Warriors’ fourth goal. Cipleu forced a turnover and passed it to Djordjevic who hooked it right back to Cipleu who headed it in to make it 5-0. Coach Stefano Salerno used the big lead to sub in players from the bench and rest their key starters. Backup goalies Luke Park ‘20 and Emilio Penny ‘20 both got notable playing time, and tallied three and four saves respectively. The Warriors dominated the Lions who couldn’t find an answer to Westwood’s attack. In “Justus’s game”, Westwood knocked out Leander 5-0 to stay alive in the district title race.

“Since day one, every single game,  these guys have given it everything they have, but today was different because we were celebrating the life of Justus,” Coach Salerno said. “The guys bonded even more; they worked harder for Louis and his family and it was a pleasure to see them play with that kind of heart. We controlled the game even more and that’s how we could get some of our seniors more playing time.”

The Warriors will look to extend their winning streak at Stony Point on Friday, February 7.