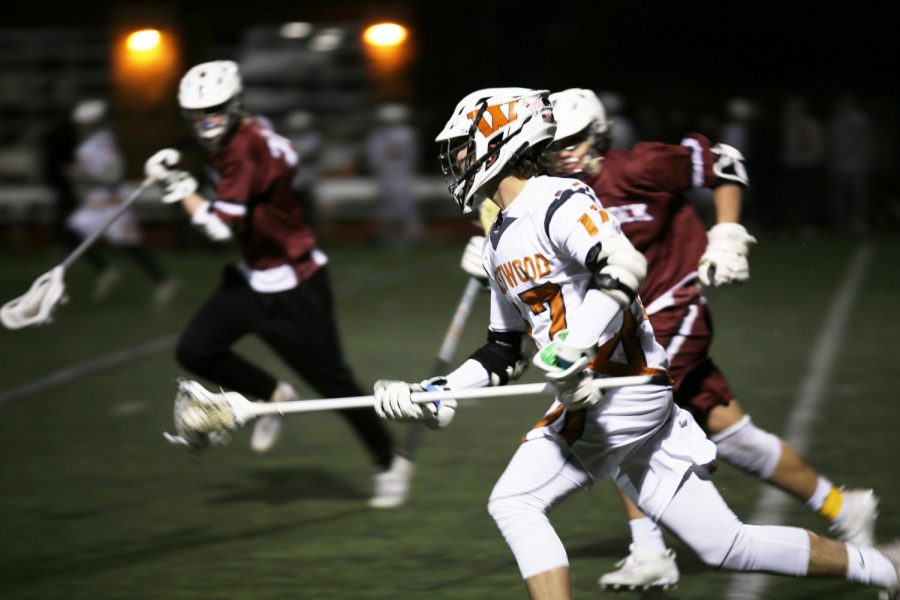 Sprinting towards the goal, Coby Koch '20 dodges enemy Dragons and attempts to score. The Warriors were ultimately unable to score during the first quarter of the game.

The varsity boys’ lacrosse team took on the Round Rock Dragons at home on Wednesday, Feb. 19, and unfortunately lost 9-4.

In the first quarter, the dragons asserted their dominance and scored two points, while ensuring the Warriors were unable to score any. The second quarter brought some hope when Sean Townsend ‘20 made a goal, but the Dragons countered with a point of their own, ending the first half of the game with a score of 3-1 in favor of the Dragons.

“The game was frustrating because I know we can play a lot better,” Coby Koch ‘20 said. “Because of the weather, we were all pretty drained and cold.”

The third quarter began with the Dragons scoring repeatedly. The Warriors did their best to retaliate when William McKinley ‘20 of McNeil made a goal followed by Koch bringing the ball down so that Noah Bowman ‘21 could score. Despite their successes, Round Rock was still in the lead 6-3.

“We need to work on our defense especially because our offense didn’t get to hold the ball very much,” Townsend said. “We also have to work on clearing the ball once we get the stop on defense and getting it across the field.”

Despite the Warriors’ strong defense, the Dragons made three more goals. Connor Cooper ‘20 made the last point of the game but it unfortunately wasn’t enough, and the Dragons emerged victorious with a score of 9-4.

The varsity boys’ lacrosse team will next play on Saturday, Feb. 22.