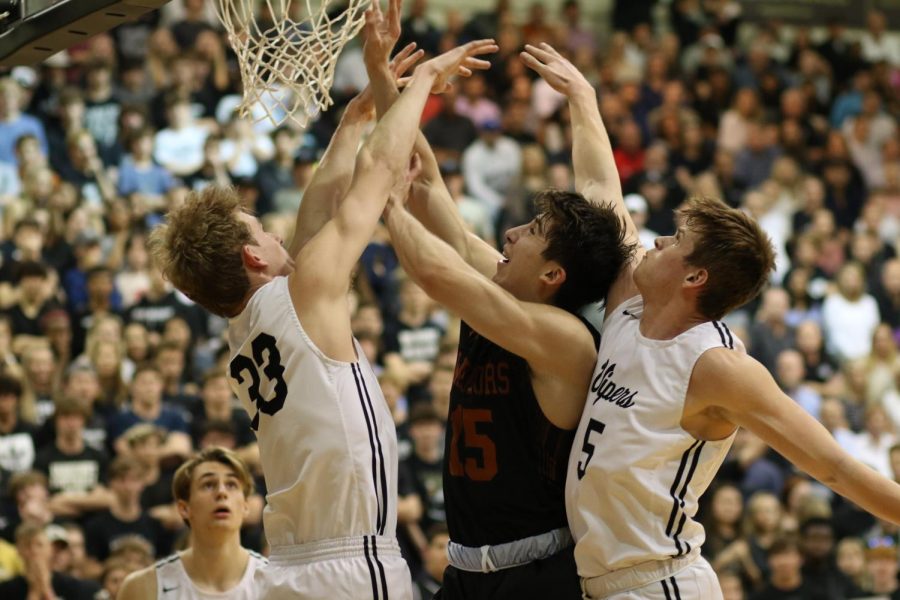 Reaching for the net, Santi Campos '20 tries to make a dunk. Even though Campos didn't make the shot, he pulled a foul and made both foul shots.

In a gym so packed that the doors were closed early and filled with constant roars and chants during every possession, the varsity boys’ basketball team faced off against Vandegrift in a playoff game for the ages on Tuesday, March 3. Every possession was a battle with lockdown defense by both teams that challenged nearly every shot and reached into passing lanes. In the end, the Warriors edged out the Vipers 42-39 with surges early in the third and fourth quarters to come back and establish a lead.

“I knew that they were going to come in overconfident because they thought that we were Westwood and we haven’t beaten them before,” Christian Robinson ‘20 said. “But our coach kept telling us every day in practice that we could beat them if we worked hard, had a team effort, and played our game plan and that’s what happened here tonight.”

After players were introduced in the fired-up atmosphere of the gym, the Vipers came out of the gates strong with a put back from star forward Greg Brown. They took an early 7-point lead with two more shots but the Warriors would not be intimidated. Forward Zach Engels ‘22 splashed a 3-pointer to put them on the board and the Warriors started to find a rhythm. A score by Brandon Parks ‘20 and a 3-pointer from Marcos Martinez ‘20 cut the Vipers’ advantage to 9-8. The Vipers responded with a couple of buckets, and the final two minutes of the quarter were scoreless as the teams locked each other down, preserving the 13-8 score.

The second quarter was truly a defensive showdown with blocks, steals, and contested shots all around. Santi Campos ‘20 opened the scoring by drawing a foul and making a 3-point play. The Warriors tied it up with a quick mid-range shot from Martinez off an assist from Robinson. With constant close outs by the Warriors and Vipers, scoring was limited for the remainder of the half. After five points from the Vipers and a free throw by Parks, the half ended 18-14 with Vandegrift in the lead.

After the squads returned from the locker rooms, the Warriors’ scoring lull ended quickly. They emerged on fire from deep and went on an 11-0 run with excellent ball movement always finding the open man behind the arc. It started with a 3-pointer from Engels and continued with back-to-back baskets from Robinson. After an inside shot from Campos, the Warriors had swung from down four to up seven, the last lead change of the game.

“We’ve shot a lot of threes in practice, so I know Coach allows me the green light to shoot,” Robinson said. “I knew that I would make some if I got open opportunities. I shot with confidence and they both went in.”

Vandegrift knocked down a shot to decrease the margin after the Warriors’ stunning run, but Parks hit two free throws to kick it right back up to seven with seconds remaining in the third period. However, when it seemed as though the Warriors would enter the fourth quarter with a three-possession lead, a buzzer-beater from the Vipers sliced the deficit to four.

In the final period, neither team backed down, and they battled until the buzzer. The Vipers rose up early with a couple of scores to tie the game at 27, but the Warriors immediately responded with a mid-range basket by Carson King ‘22 followed by an alley-oop layup from Parks to Anish Maddipoti ‘20. The Warriors refused to surrender the lead, and a 3-pointer from Campos and two free throws by Robinson pushed it to 36-29. Yet the Vipers would not fade away as they went on a 7-2 run to cut it to 38-36 with less than a minute to go. A putback from Parks pushed the difference to four, but Brown sunk one from behind the arc despite Maddipoti’s hand in his face. With the game in the balance, Parks drew a foul and went to the line. As the Vipers’ side roared, the Tribe stayed silent as Parks hit both crucial shots.

“The crowds were screaming in my ear and I [could] only hear one side,” Parks said. “I just knew that I have to make these free throws in order to win.”

With 7.4 seconds on the clock, Brown flew up the court and took the final shot. As the whole gym watched it eagerly, it clanged off the back rim and went over the backboard and out of bounds. The score was set, 42-39 Warriors, and the supporters rushed the court to congratulate the team.

“It feels great. Our guys earned it, they played awesome on defense and that keeps us in every game,” head coach Brad Hastings said. “Today was no different, it was just like every game we’ve played all year. It was close, and came down to the end.”

The team will move on to the Regional Semifinals, where they will play Wylie on Friday, March 6.