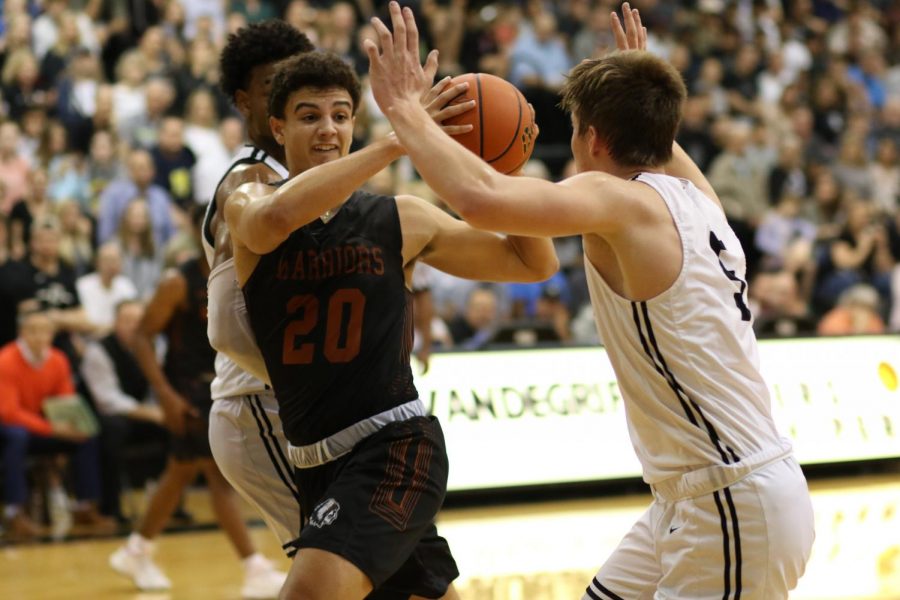 Sandwiched in between two defenders, Christian Robinson '20 attempts to pass the ball. This was during the first quarter and the energy was high.

Traveling up to Dallas, the varsity boys’ basketball squad took on the Wylie Pirates in the Ellis Davis Fieldhouse on Friday, March 6. Following a momentous win over district foe Vandegrift and hoping to ride the positive momentum they gained in the previous round, the Warriors were looking to advance to the round of eight in their first regional tournament in 22 years, but their opponents had different plans; propelled by a hot start, Wylie was able to knock out the Warriors 43-29, ending their season after three playoff wins and a 24-12 overall record.

Brandon Parks ‘20 led all Warriors with 12 points, while Zach Engels ‘22 and Santi Campos ‘20 chipped in six points each. To round out the scoring, Luca Cipleu ‘21 added three points, and Carson King ‘22 tacked on two points. Campos led the team in rebounding with five boards and on the defensive end, the Warriors had five steals while King tallied three out of the team’s four blocks. The Warriors’ 21% shooting from the field combined with Wylie’s intense defensive pressure consistently made life difficult for the Warriors on offense, and played a big role in the season-ending loss.

After Wylie won the opening tipoff, King recorded his first block on the opening series, setting the tone for a hyper-defensive game. The Warriors had a cold start offensively, but strong defense on the other end was able to keep them in it at first. The Pirates were able to lay it in for the first points of the game a little over three minutes into the contest, and after the ball slipped through King’s hands on the ensuing offensive series, Wylie quickly doubled their lead with a quick fast break bucket. A pair of free throws further extended the Pirates’ lead, 6-0; meanwhile, the Warriors couldn’t catch a break on offense, with self-inflicted turnovers plaguing them and shots failing to go in. A 3-pointer at the other end from Wylie extended their lead to nine, capping off a nightmare beginning to the game for the Warriors. However, Parks ended the cold streak with an and-one opportunity with 1:19 left in the quarter, their first points of the game. Wylie responded with another bucket, but a slick pass from Marcos Martinez ‘20 to King made it 11-5. The Pirates responded with a 3-pointer to end the first quarter with the Warriors down 14-5.

“We came out really sluggish at the beginning of the game. After that 9-0 run, we knew we had to play our game and not change our style of play to adjust to theirs,” Anish Maddipoti ‘20 said. “I think that run at the beginning gave them momentum and that momentum carried them throughout the game.”

Parks started the scoring in the second quarter with a nice drive to the rim to cut the lead to seven. Scoring stalled for a while after the senior guard’s bucket, but the Pirates ended the combined drought with a free throw and another basket to push their lead to double digits, 17-7. Parks countered with a 3-pointer, but Wylie once again responded with three more points to put the lead back at ten, with the score now being 20-10. Cipleu knocked down a shot beyond the arc as the second quarter was coming to a close, but the Pirates immediately responded with a three of their own to keep the ten-point lead. The Warriors held the ball for the last shot, but they were unable to get a shot off as the half concluded. Both teams headed into their locker rooms with the Warriors behind 23-13.

“We knew their guards would be looking to get it inside to their bigs, so we had to have back-side help in order to prevent that,” Parks said. “Even when they did get the ball, we wanted to get as many people to help off their man and try to get the ball from the bigs.”

The second half started with a miss from downtown, but King was able to come up big on the defensive end once again, with two blocks and a rebound to end the Pirates’ offensive series. Wylie was able to rattle off four points from two buckets after that though, increasing the deficit to 14. Campos hit one out of two free throws, but Robinson was able to tip out the missed second free throw to extend the offensive possession, and Campos was able to score a layup to make the score 27-16. A few series later, Campos was able to pluck the ball away from an opposing Pirate, and Engels knocked down a three in transition for his first points of the contest. Wylie responded with a 2-pointer to preserve their double-digit lead, with the score now being 29-19. Parks hit a free throw to put the deficit back at single digits, but the Pirates countered with another bucket. Parks was able to draw a foul on a successful, skillful layup where he cut between three defenders and avoided the charge, knocking down the ensuing free throw to cut the lead to eight, 31-23. Wylie ended the third quarter with two baskets, though, and the Warriors found themselves down 35-23 heading into the final frame of the contest.

To start the final quarter of the game, Wylie was able to shed 1:15 off the clock and earn a backbreaking 2-pointer with it, increasing their lead even further. With the Pirates not in the bonus yet, the Warriors began to foul quickly to save time if they could not get an immediate steal – Campos was able to steal an inbounds pass but failed to convert, with the Pirates scoring another two on the other end. Engels responded with another 3-pointer, but after a few series, Wylie got a layup to push their lead to 15. Running out of time, the Warriors continued to foul, finally reaching the bonus, and Wylie knocked down two shots from the line to push their lead to the largest it would be all contest, with the score now being 43-26. Campos knocked down a couple of free throws to make the score 43-29, which would be the last points of the season. With their comeback hopes waning, head coach Brad Hastings made a sweeping substitution to put in players not usually involved in the regular rotation and give them playing time. As the final buzzer sounded, the sobering reality hit: a wildly successful season and a great playoff run had come to an end much sooner than they would have liked.

“Obviously the season didn’t end how we wanted it to, but we exceeded what everybody expected for us to do this year,” Maddipoti said. “This was an unforgettable season and I couldn’t have asked for a better group of teammates and coaches to have spent it with.”

The Warriors now head into the offseason to prep for next season, hoping to build off of a great year.