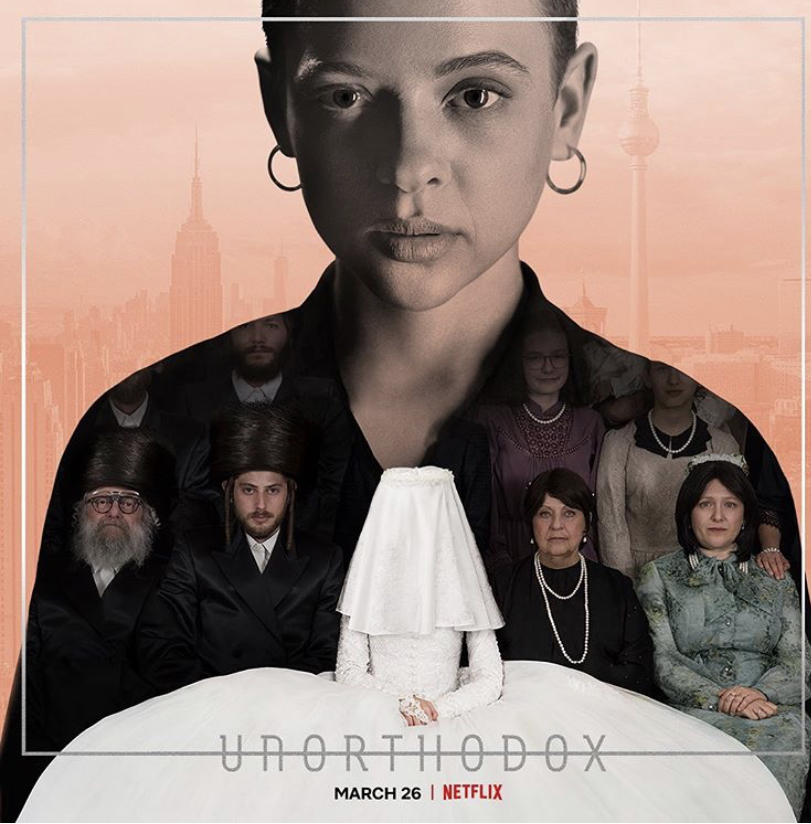 The new Netflix German-American show Unorthodox, based on the memoir Unorthodox: The Scandalous Rejection of My Hasidic Roots by Deborah Feldman, tells the story of young Esty Shapiro who is stuck in the stringent religious confines of the Satmar Hasidic community of Brooklyn, New York. The orthodox traditions that have controlled her life for so long have nearly suffocated her and she seeks to escape, fast and unnoticed. The raw and accurate depiction of the Hasidic community was researched for the production of this series which has become the first Netflix show primarily in Yiddish. A partial adaptation of Feldman’s memoir, the show chronicles some of the author’s life experiences in her tight-knit Jewish community that is deeply immersed in standards and stigmatizes against those who reject tradition and avoid conformity.  The excerpts of Esty’s life in Brooklyn dealing with the weight of being married off young and being restricted from the things she enjoys, is based off of Feldman’s own youth. However, as Esty transitions to a new life far away in the musical cityscape of the German Capital, the show’s creators altered some of the storyline away from Feldman’s personal life.

Feeling unsatisfied in her life and feeling crushed by the expectations that are set on her to become a mother within one year of marriage, Esty flees New York for Berlin, Germany, seeking a path of self-exploration and to reconnect with someone who has been absent for most of her young life. She also reinvorgiates a long-held passion she has for music which syncs up with the musical exuberance of Berlin, where she meets a group of young, culturally diverse musicians who perform in a classical orchestra group at a competitive music academy. She befriends them and simultaneously attempts to gain admission into the academy via scholarship, for she has little money and no permanent place to stay. She travels through the city where she witnesses many places that now are tourist sites but were once the sight of the horrific genocide of her Jewish ancestors. The weight of the history burdens her and she feels the implications the Holocaust had on her family back in Brooklyn. Meanwhile, her husband travels in search of her as her relatives back home don’t approve of her gutsy and in their eyes selfish decision to leave the community. Esty’s brave and determined character shines in this show, making it a compelling journey to watch.

The impact this show has on viewers is astounding. In one scene, on a day trip with her new friends, she visits Lake Großer Wannsee for a day of sun. Lake Großer Wannsee, a friend tells her, was once the backdrop for the notorious Wannsee Conference, where the Nazi Regime planned the horrendous execution of Jewish citizens. When Esty wades into the lake, her long skirt trailing through the water, she is invigorated and free, and is able to let go, unafraid of what someone in her community back home might say. She removes her wig, and is revealed to have a shaved head, which is a ritual that Satmar married women undergo. Esty feels at peace in the blissful cool of the water and in a place where her ancestors’ were oppressed and murdered for being different she realizes that to honor them and their memory she must forge her own path. Esty realizes life is fleeting and that she must be her own woman. This show is full of spectacular aspects especially ultra-talented yet relatively unknown actress Shira Haas who plays Esty. The cinematography and screenwriting which capture the one-of-a-kind Satmar community provides viewers with an in-depth account of the Jewish orthodox lifestyle. Having culturally diverse shows on Netflix curates open-mindedness and expands viewers’ world perspective. While being an entertaining story it incorporates critical themes and memorable characters. It is especially fascinating that the show’s creators were able to accurately depict Esty’s community by getting assistance from people who formerly lived in the community to add to the plot and provide descriptions of cultural traditions.

Esty’s struggle to stay true to herself while feeling tied to her cultural identity bears a heavy weight on her. The brilliance in this show is how it so accurately paints a portrait of such a unique community as well as highlighting Esty’s personal story while being informative and moving.