A Review of Confederate Imagery in Central Texas 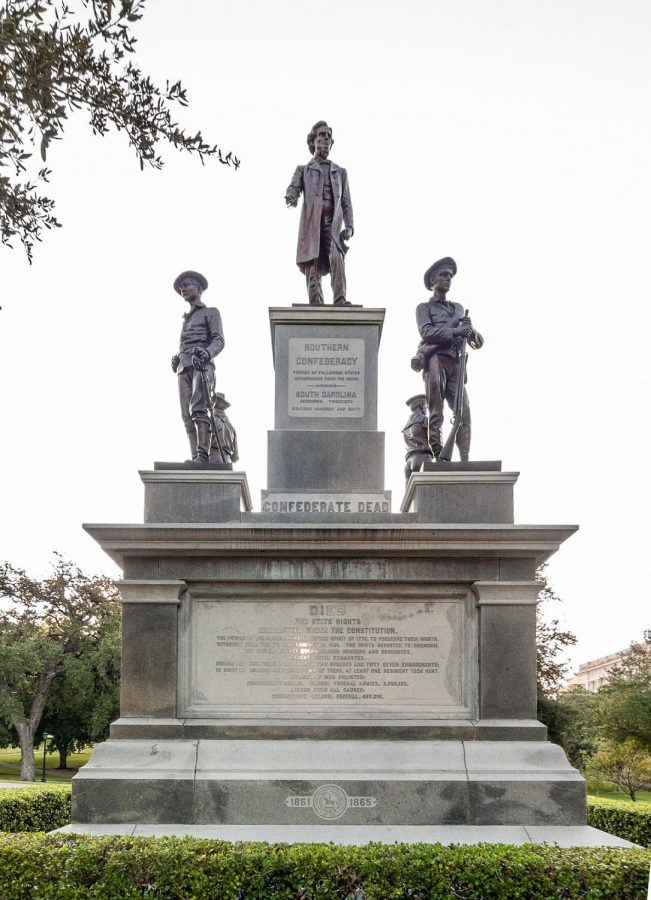 This statue is a monument to the Confederacy and is situated on the grounds of the Texas Capitol.

After the death of George Floyd, the Black Lives Matter (BLM) movement was thrown into full force across the country, starting with protests calling for the obstruction of systemic racism. Following the violence and desperation of thousands of people demanding change, discussions from all sides emerged at all levels of government about how to respond to the situation. A solution that has been gaining steam across the country is removing Confederate symbols and monuments.

The great majority of Confederate imagery in Austin is situated within or near the Capitol building. Built in the early 1900s, Terry’s Texas Rangers Monument, Hood’s Texas Brigade Monument, and the Confederate Soldiers Monument are all located on the grounds of the Capitol. Additionally, several paintings within the building itself celebrate Confederate leaders, such as the central portrait in the Senate Chambers, depicting Stephen F. Austin flanked by Jefferson Davis, the president of the Confederacy. Many illustrations of Confederate soldiers and representatives line the walls of the House Chambers. While most of the Capitol art is greatly admired, some local leaders dislike the open display of Confederate imagery.

“The racist imagery cast[s] a dark cloud on the otherwise good reputation that Texas holds throughout the world. I would think that the families of white slave owners would be seeking forgiveness rather than a reminder of the atrocities they or their families have committed. It is up to all of us to raise our voices to reinforce the idea our forefathers brought forth that we are all equal in the eyes of God,” Steve Chamberlain, the Bastrop County Democratic Party chair said.

Other Confederate tributes in Austin include a school and a state office building named after John H. Reagan, the postmaster general for the Confederacy. Austin also observes the holiday “Confederate Heroes Day.” Advocates for the BLM movement in Texas are anxious to see all of these monuments taken down.

“When you turn around after the war and then put up a monument to honor the Confederacy, what you do is slap African Americans in the face,” Sen. Royce West, (D-Dallas) said to the Austin-American Statesman.

Athletes are one of the most prominent groups taking a stand against Confederate memorials. The National Association for Stock Car Auto Racing (NASCAR) recently banned the Confederate flag from all events and properties. Student-athletes at the University of Texas (UT) are clamoring for the discontinuation of their school song, “The Eyes of Texas,” which has ties to segregation.

Debates and lawsuits have already started, arguing whether statues commemorating the Confederacy should be toppled. Recently, over 2,300 citizens from Bastrop County signed a petition insisting that Confederate monuments be removed from Bastrop property, specifically the two stone monuments honoring Confederate soldiers who died in the war outside of Bastrop County Courthouse. A rally will be held on June 22, asking for the County Judge to address the monuments on his agenda.

“The Confederate monuments outside Bastrop County Courthouse, or any courthouse, are only there to intimidate and remind citizens of color of the pains of the past and how people of color did NOT receive fair and equal treatment then, and still today in the judicial court system. It’s unfathomable to believe that anyone supporting these monuments can not see how they would be hurtful and disingenuous to people of color,” Mr. Chamberlain said.

Although many in Bastrop agree with this statement, others, including County Judge Paul Pape and the Republican Party chair, disagree. They believe that honoring the legacy the Confederacy left behind is important.

In addition to claims about remembering the past, others feel that renaming or removing statues is not necessary. They consider working on reforms in the police system far more significant than addressing Confederate landmarks.

“Is there a causation between monuments and unlawful police behavior? We can talk about monuments, but it’s bad racist cops putting their knees on the necks of citizens. We’ve got to stay focused on the problem,” Rep. James White, (R-Hillister) said to the Austin-American Statesman.

However, those who demand the eradication of Confederate imagery do not think that this is a substantial argument. They understand the importance of history, but believe it is not right to display the figures who caused so much African American suffering in a way that celebrates their actions.

“If we want healing in this state and in this country let’s make sure we take those moments, those pictures, those names down off those buildings and put them in the museum and make sure we give them proper context, so the argument of trying to bury the past won’t be a valid argument,” Mr. West said.

As of now, there has been no movement to eliminate Confederate landmarks specifically in the city of Austin. The protests over the glorification of people who believed in slavery and oppression of African Americans brings up other questions about other parties who have been subjugated. Mascots, words, songs, and other symbols are all subjects that may be discussed in the near future, including the Westwood mascot, the face of a Native American “warrior.” The BLM movement has opened the doors for the people who have been victimized in the past to finally speak up for themselves and has kickstarted the road to rapid changes in society.