What Do People Think of The Austin BLM Protests? 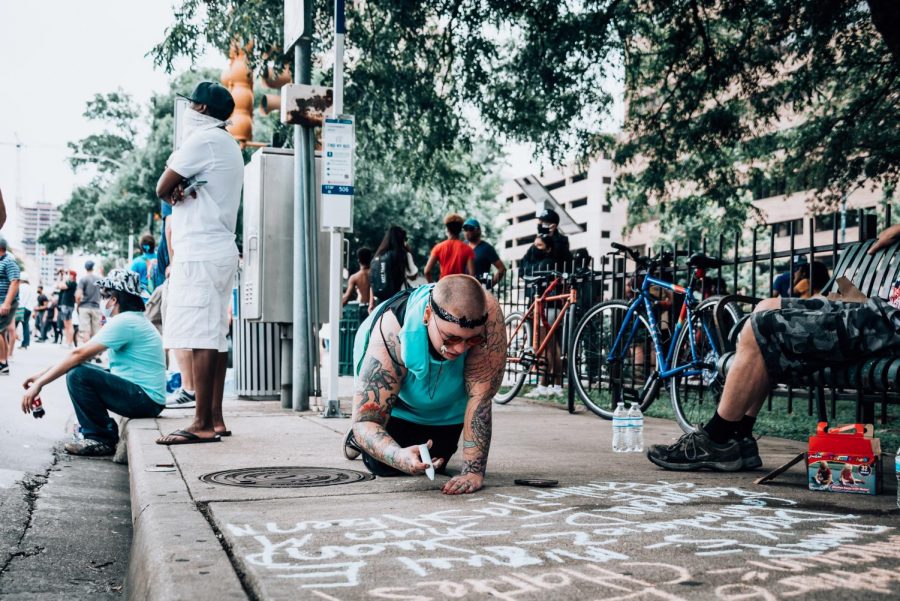 Looking at her phone, a protestor writes a quote with chalk on the streets of downtown Austin. While writing she shared stories of the protests the occurred the previous day with the people around her.

This past weekend starting Friday, May 29, the Black Lives Matter Movement started to take root in Austin with protestors lining the roads. Crowds of people came out in support of the movement, including students. The protests started in reaction to George Floyd’s death after former police officer Derek Chauvin kneeled on his neck for about nine minutes in Minneapolis. In response, protesters took to the streets in cities across the US, including Austin.

“[The protests] were very peaceful and uplifting; the amount of police and helicopters there was ridiculous,” Isha Sindhav ‘22 said. “It looked like they were expecting us to break into the Capitol building. Even when we left the protest, the police were still sending in even more backup. This proves how scared they are of the community rising up and fighting back against systems of oppression and hate.”

The first protests in Austin were unplanned protests. During these protests, people made speeches and chanted slogans such as, “Whose streets? Our streets.” Other protestors knelt with their fists up in the air in solidarity with the movement. While most of the demonstrators were peaceful, others broke out into riots and resisted. Some threw rocks, bricks, eggs, and more, while others vandalized and set fires. On Saturday, the Austin Police Department (APD) reported arresting 14 people for these acts. The following day, on Sunday, a planned rally and march took place. Although all the demonstrators shared the goal of defeating racism, students advocated for different methods of doing so.

“For example, punishing the cop will not fix anything other than set an example,” Tomas Llano ‘21 said. “But if we explain to people why racism is bad and use examples of positive things that happen when we all come together then it will be fixed.”

Many of the protestors were also fueled with another murder that happened on April 24 in Austin, when Police officer Christopher Taylor shot and killed 42-year-old Michael Ramos. Brenda Ramos, his mother, also spoke at the rally on Sunday.

This issue is not contained within the borders of Austin; people across the nation are fighting for justice for blacks and believe that systemic racism has infiltrated law enforcement from its creation.

“I think that justice has been long overdue in this country,” Samia Arni ‘20 said. “As a community, we need to unlearn our internalized racism and take action to defend and keep black people safe by defunding police and investing in things that actually improve our lives such as healthcare, mental health, housing, and education.”

I-35 completely closed down and at one point, protestors began laying down on the road. The APD utilized smoke to divert people off of the highway and took action against anyone acting unlawfully. Afterwards, the protests moved away from APD headquarters and marched down to South Trinity. Later on, Mayor Steve Adler also joined the protestors in a speech stating that he understood the cause, but also had concerns about the spread of the coronavirus. In a later interview with KVUE, Mayor Adler spoke and explained his concerns more in-depth.

“I understand that [sic] the need to speak to the First Amendment issues related to George Floyd and Michael Ramos and the lack of trust and need for accountability and action,” Mayor Adler said. “At the same time, we are in the middle of a pandemic and I have been consistently been urging people to avoid large groups.”

However, protestors kept coming throughout the rest of the day, as new chants and activities occurred.

After the day had finished, the Austin-Travis County EMS reported having “responded to 8 protest-related incidents.” Despite the majority of people protesting peacefully, like one man who started praying in the midst of all of the chaos, there was violence initiated by APD. On social media, discussion about people getting shot during the protests, and possibly killed, circulated, although we couldn’t confirm these accusations. Tear gas was also used at certain points by APD. For protestors, even the ones who kept a distance or protested peacefully, it was still an incredibly dangerous situation.

“People would peacefully chant in honor of George Floyd and others would simply run around and break into stores,” Kristen Velasco ‘22 said. “I saw people I knew from other schools unaware of why exactly they were marching whereas just picking fights with anyone in their way.”

Some objected to the demonstrations due to the violence and “riots” that people were causing. Others also expressed concerns due to the coronavirus still circulating around the community. At least one person we talked to believes that people were exaggerating police violence and that Floyd’s death was not motivated by a racial factor. However, protestors did not let this stop them.

“People are taking this way too far, and they need to just stop. I don’t care about the racism involved, it is one guy being a racist and he deserves to be punished,” an anonymous student said. The student asked to stay anonymous out of privacy concerns. “This doesn’t mean that everyone is a racist and protesting will literally solve nothing. In fact, the protests are causing far more harm than good in many parts of the country.”

The fight against police brutality is continuing to grow and gain traction, not only in Austin but globally. Locally and on social media, people are taking action by spreading awareness about police brutality against blacks. Although there is opposition to the movement, protestors are not ready to stop yet. These protests will not be the last until the demonstrators see changes in our communities’ police departments.