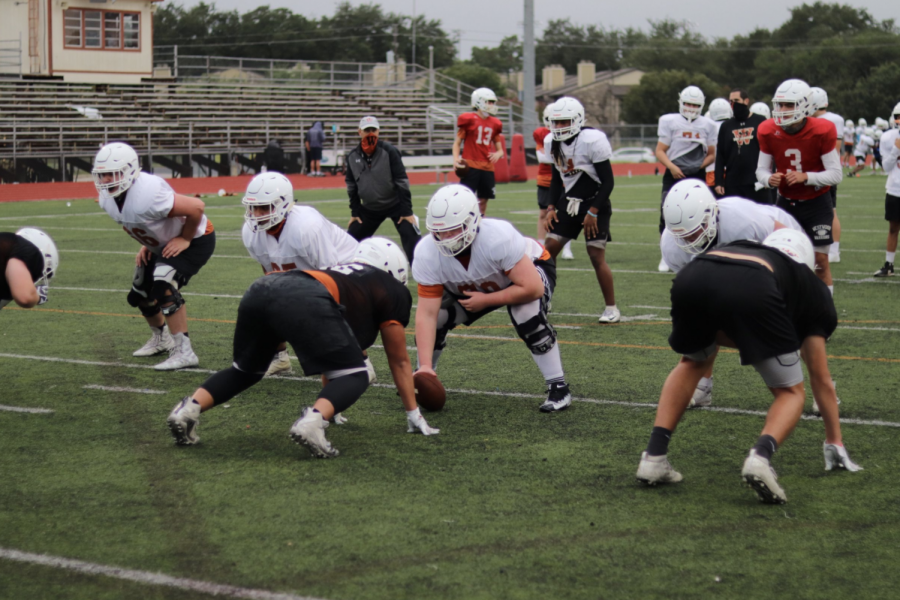 In his stance, center Eric Taylor '21 waits to snap the ball. Players will have to wear masks under helmets during play. Photo courtesy of Ben Ramsey '22.

While the kinks of online learning are being ironed out, the obstacles of kickstarting athletics and team sports safely are being evaluated as Thursday, Sept. 10th approaches. Many teams have already begun optional fitness practices, including tennis and football. Additionally, the University Interscholastic League (UIL) has released a calendar for most fall sports, with some dates for games falling a few days after the start of in-person learning. However, the challenge of implementing proper safety precautions while training effectively still remains.

So far, sports practices have been filled with social distancing, mask wearing, constant sanitizing, and fewer drills. Coaches are attempting to be as safe as possible, but also hold their players to the standards they always do, asking them to give one hundred percent every time they practice.

“We have not been able to train as much as we would have liked, but we understand these are different times,” varsity tennis head coach Travis Dalrymple said.  “We are working as hard as we can during the times we can and hoping to get the team [up] to full speed. We hope to have a fall season and [we] want to compete at a very high level and bring some normalcy back into everyone’s lives.”

Although the UIL has released advisories about how safety can be managed, most coaches and players are uncertain about what games and matches will look like in the fall season. They are still waiting for clear guidelines from the UIL regarding several safety issues, including how transportation will be accomplished.

“I honestly hadn’t really thought about how matches are going to look,” JV tennis coach Daniel Veve said. “I’m still concerned about how I can safely get [my players] to matches on a school bus and still maintain social distancing requirements. Once we get to the matches, I imagine there will be something like the United States Tennis Association (USTA) has, where each team or each player has a set of tennis balls that only they use for serving, [but] I think a lot of stuff will have to be decided and implemented by UIL for us.”

However, the situation is more complicated for contact sports, including football and soccer. So far, football has been following safety protocols such as maintaining a social distance of six feet, wearing masks while not exercising, and having trainers operate water stations instead of players. With the first football games around the corner, coaches have started to discuss what safety measures will be taken at games as well.

“[The coach] said that we’ll have more buses to transport us to the games and everyone will be spread out on [them],” football video taper Ben Ramsey ‘22 said. “Also the players will wear face masks under their helmets and each will have their own water. I was [also] told that the audience in the stands will mostly be cut to 50 percent capacity.”

Many players also have concerns about how they can be safe while attempting to practice in the most effective ways possible. They fear they will not be able to train as much as they would like to while prioritizing their health.

“One of my biggest concerns is how we are going to use the weight room,” JV soccer player Amy Simon ‘23 said. “It’s not a big space and there are over 60 girls in soccer this year. Another concern is how we are going to practice together. It’s not easy to social distance in soccer since there is so much contact involved.  As of right now, our first official game is on [Saturday,] Jan. 2. I would hate to see our season cut short like last year [so] I’m hoping that things will look better by the time [it] starts because we still have a few months.”

Starting up sports has provided a number of challenges for coaches, players, administrators, and teams in general. Everyone is trying to find the fine line between being as safe as possible while also training for high levels of competition in the midst of a global pandemic.