The Presidential Debate Shows a Need for Reform 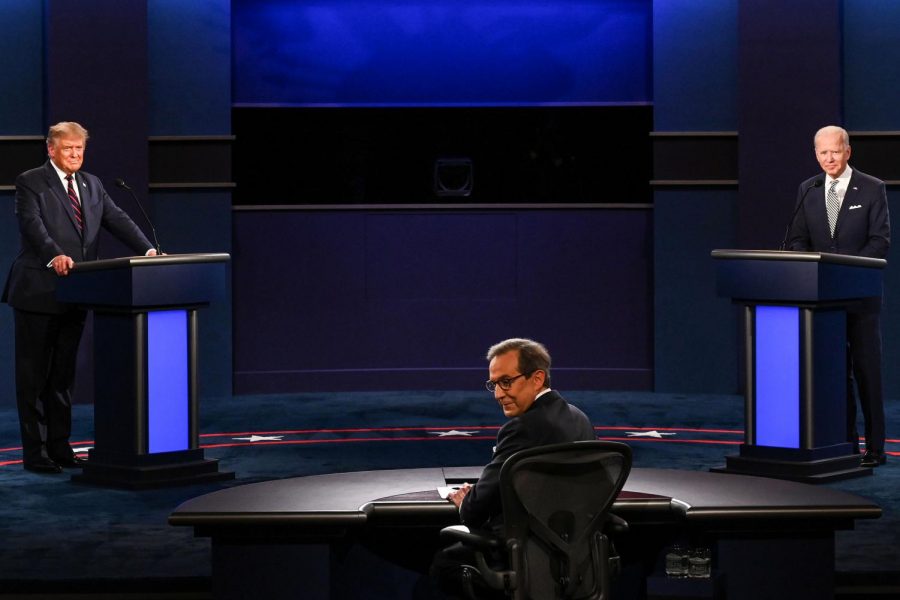 Americans across the country tuned in to watch the presidential debate, not expecting the drama chaos that would unfold. Both candidates refused to cooperate and follow debate rules, especially President Donald Trump, and the moderator was unable to stop the two from turning the event from a time-honored tradition to one without any substance. Courtesy of time.com

It does not have to be said that the Sept. 29 presidential debate was a disaster. Like a chasm opening in the ground while an earthquake rages, it seemed to only get worse, creating a black hole of darkness and confusion that carried the supposed leaders of the country away, while the American people scrambled on the other side, abandoned, trying to find their footing. America doesn’t need another debate like that.

The solution to the problem created by President Trump’s affinity for creating catastrophe isn’t to change the rules to account for his idiocy, like the debate commission plans to do. It’s to simply take away his platform and refuse to give him airtime to spread misinformation and create strife during the debates.

Traditionally, the presidential debate is a chance for both candidates to appear in front of the country and make their stances on controversial topics known. It’s a chance for candidates to show voters who they are as a person, and who they might be as a leader. Americans can make up their minds about which candidate suits them best, analyzing responses and rebuttals. Traditionally, one man will emerge as the “winner” of the debate, but in a year where tradition has been upended and America has seen upheaval, there were no winners in the Presidential debate, only losers. How will America benefit from another round? The game of presidential debate is made useless by the incompetence of its players.

From the moment he entered the presidential race in 2015, to the day he took office and the day he will finally leave it, Republican nominee Donald Trump has been and will continue to be a disruption to peace, security, and rationality- his attitude during the presidential debate was no exception. Watching the illiterate and pathetic excuse of a politician toy with the future of the country on national television through his interruptions, false claims, and inflammatory rhetoric elicited both desperation and frustration from Americans watching at home, a sentiment echoed by the remarks of Democrat Joe Biden (“Will you shut up, man?”). And even though his overzealous bickering echoed in the ears of Americans even once they turned the television off, Trump was still unable to get his point, or any point for that matter, across. He appeared to have been set to attack mode without an off switch, but whatever he was attacking remains unclear.

An ill-equipped Biden floundered through the debate, forced to both fend off unceasing verbal attacks and respond to questions. Long criticized for his slow responses or lack of charisma, Biden was at a loss for how to deal with Trump’s sabotage of decency and rules. His haphazard answers managed to convey only his exasperation at the whole affair, and in the rare moments where he could break through and deliver a strong remark, they were shattered by Trump, the proverbial bull in the china shop.

Despite this clear burning of the rulebook, moderator Chris Wallace of Fox News still attempted to run the debate as if dealing with average candidates on an average election year. And while both Trump and Biden had agreed to a format in which each would have two minutes to respond to a question from Wallace without interruption, this obviously didn’t happen. In the face of this, Wallace ceded his role as moderator and instead devolved to a helpless bystander (“I think that the country would be better served if we allowed both people to speak with fewer interruptions. I’m appealing to you, sir, to do that,”) unable to rein Trump in to allow for the two minutes of calm and clarity the country so desperately needs.

America has been a polarized country for a long time now. And in 2020, a year where COVID-19 and widespread civil unrest already have the majority of voters firmly decided on one candidate, America doesn’t need anymore debates. While the president continues to lack basic human decency, nothing can fix him- not turning off his mic, nor pleading with him to stop. It would be a step backwards and a chaos ensuing mistake to allow the president another opportunity to spread his harmful lies, create distrust in the election process, and refuse to acknowledge the damage his supporters do in his name (“Proud boys, stand back, and stand by,” ) This, combined with the news of the president’s COVID-19 diagnosis, makes the path forward clear: cancel the upcoming debates- America doesn’t need them.