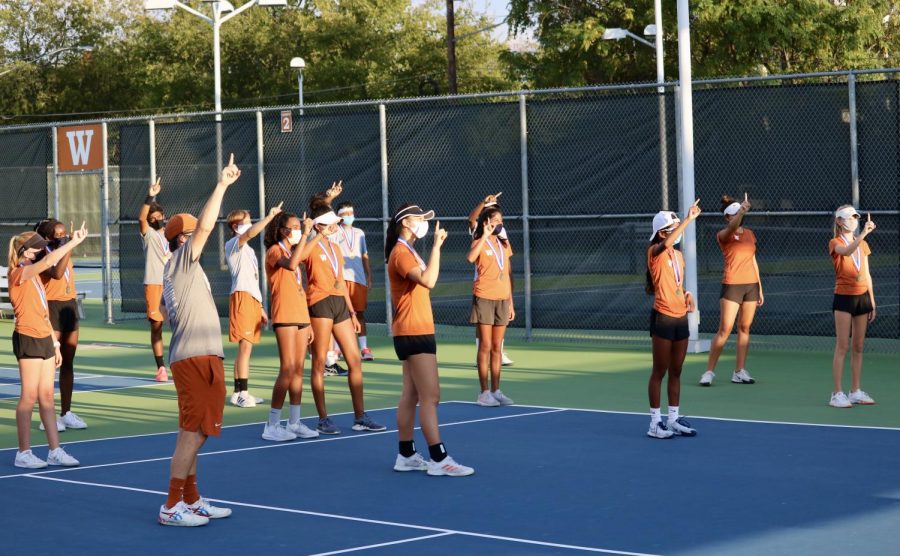 Varsity poses with their medals six-feet apart and wearing masks, holding the number one in the air. This is the team’s 11th district title in a row, and it’s their first step towards the goal of winning the state championship. “I was happy with our performance today. We had a few hiccups here and there, but we definitely set the tone for the match. We just have to keep capitalizing on the net and making the most of our chances,” Coach Travis Dalrymple said.

Loud roars of “Sko Wood” and electrifying cheers signaled the 11-1 defeat of the Vandegrift Vipers on Tuesday, Oct. 20, securing the varsity tennis team’s 11th consecutive district title. As this was their first step towards the ultimate goal of winning state, the players were determined to take the trophy home, their cool determination and smooth strokes setting the tone for the entire match.

With the large burnt orange “W” at their backs, the team jumped off to an early start in doubles, taking Vandegrift by surprise with continuous movement that closed off the net, constantly forcing errors from the Vipers. Boys’ doubles pairs swept victories effortlessly, with seniors Nicolas Pesoli and Daniel Antov crushing their opponents soundly with a 6-0, 6-1 defeat, sophomores Aadhi Raja and Marko Mesarovic swiftly taking care of business and finishing the match with a score of 6-1, 6-0, and Sachchit Sivaram ‘21 and Zeyad Elchouemi ‘22 clinching a 6-1, 6-1 win.

“Me and Sachchit have been playing together for [three years],” Elchouemi said, “and I think we’re really building up that chemistry even more. He has more trust in me now on the forehand side, and I one hundred percent trust him [because] I know that whenever he gets the chance he’ll win the point, and I think we got what it takes to go really far.”

Mixed doubles also kicked off early, Aashish Dhanani ‘22 and Gina Mepham ‘23 keeping their balls in play with arcing topspin and setting up volleys for easy put-aways. Unfortunately, the team lost in the third-set tiebreaker with a final score of 6-2, 4-6, 0-1 (8-10). However, the new doubles partnership has pushed through their season with flying colors so far.

“I think we played pretty good this match because the [other team was] really good,” Mepham said. “We got a [strong] start in the first set right away [but] we just had to carry it all the way through the tiebreaker. I guess [me and Aashish] were acquaintances last year but we’ve become good friends now because we play together. As we’ve gone along, we’ve kind of been able to start to read each other. It’s like getting to know each other better through playing tennis, which is really awesome.”

Other chemistry-filled partnerships in girls’ doubles fought hard and came out triumphant with straight set wins. Kinaa Graham ‘23 and Simryn Jacob ‘24 flattened their opponents with a 6-1, 6-1 score, Rishika Vemulapalli ‘22 and Alex Mepham ‘24 secured a 6-3, 6-2 win, and Jessica Lu ‘21 and Dana Kardonik ‘24 closed out their match with a 6-3, 6-0 victory.

Lu and Kardonik have partnered in doubles four times now, and their bond has grown stronger every match the two have played together.

“I love playing with [Dana],” Lu said. “She’s a freshman but she’s doing really great, [and] we clicked pretty quickly. The first match we played was kind of rocky, but as soon as we finished that first match, every match after that has been really great. For one, she’s really consistent on the baseline, so I can trust her to set me up with a good shot when she’s rallying, and likewise when I’m at the baseline, I know [that] if I set up a good shot for her, she will be able to put it away, so in that way our games really match up.”

After the 6-1 lead in doubles, boys’ and girls’ singles quickly concluded the match, keeping balls in play and setting up big points through deep, consistent play. Mesarovic, Sivaram, and Raja swept 6-1, 6-0 wins, and Antov steamrolled his opponent to a 6-0, 6-0 victory.

“It’s been a pleasure to be part of such a great team, but this is my last season, so it’s really great that I get to close out the season with a win,” Sivaram said. “Our goal is to win state, [and] I feel like we have some things to improve on, but I think we can get it done and bring that state title home.”

With another district title under their belt, the team is looking ahead to its playoff matches next week. Practices are being elevated and the players are focusing all their efforts on moving towards the state championship in November.

“[This district title] is pretty special since when I was a student here, all we did was win district finals, and when I got here as a coach, we hadn’t won one in 9 years,” Coach Travis Dalrymple said. “We’re back to always winning it and I’m glad, but we got bigger fish to fry and we’re moving in that direction. This is one of the hardest working teams I’ve ever had, and we just got to keep the pedal down. It’s easy to take the pedal off the gas, but we have to keep the gas down and keep bringing the heat.”

The Warriors will take on Austin High School in their bi-district match on Monday, Oct. 26.