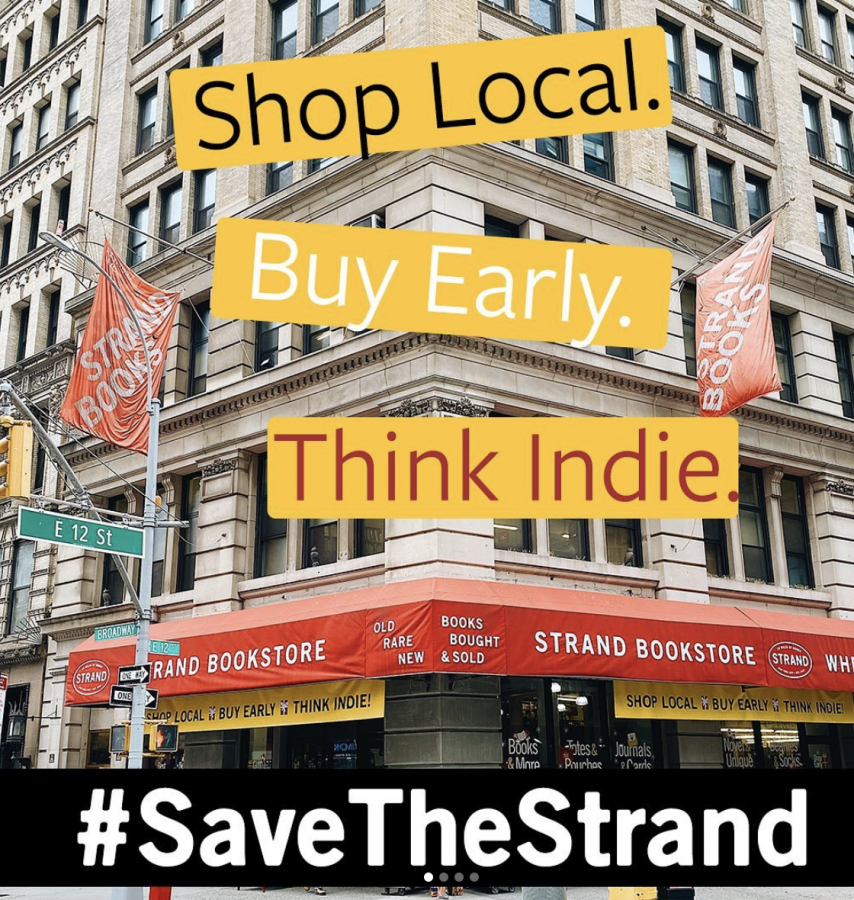 The Strand Book Store is an iconic New York City establishment, but has found itself struggling to survive during the pandemic. When the store's owner, Nancy Bass Wyden, issued a call for help, readers showed up in droves, spurring the viral movement #SaveTheStrand. Photo courtesy of @strandbookstore.

Founded in 1927, New York City’s Strand Book Store can be described as a book lover’s paradise. Three floors of sky-high colorful shelves, reading nooks, and a cluttered yet organized book utopia has attracted both regular and elite customers alike for decades. The Strand boasts a catalog of more than 2.5 million literary works (apparent in its slogan “18 miles of books”), rare historical documents, such as a folio of Shakespeare’s works, which was sold in 2006 for $100,000, and numerous acknowledgments in pop culture.

Most recently, it was featured in Netflix’s adaptation of Dash and Lily, but can also be found in Meryl Streep’s Julie and Julia, the 2010 film Remember Me, where Robert Pattinson stars as one of the Strand’s employees, and is also referenced in the popular TV show Gilmore Girls. David Bowie even once called it one of his favorite places in New York.

The Strand even stayed in business during the Great Depression, the second World War, and the 9/11 terror attacks. Despite all this, however, the Strand is struggling to survive during the pandemic.

“We need your help. This is the post we hoped to never write, but today marks a huge turning point in the Strand’s history. Our revenue has dropped nearly 70% compared to last year, and the loans and cash reserves that have kept us afloat these past months are depleted,” the bookstore’s third-generation owner Nancy Bass Wyden said in a tweet on Friday, Oct.23. “We have survived so much in the past 93 years, and we are ready to fight against all odds to keep the Strand alive, but we cannot do it without book lovers like you.”

New Yorkers and international book lovers alike heeded her call for help. In just one weekend, the store made $170,550 in sales, from over 25,000 orders, in contrast to its average 300 daily online orders causing the website to crash. Lines to buy books in-person stretched around the block as people made different kinds of purchases. Authors and celebrities also expressed their support for the business, such as American pop musician Halsey, who encouraged fans to order their copy of her upcoming poetry book from the Strand.

The response left Wyden overwhelmed with gratitude, and she later posted a video of the packed lines of masked customers waiting to enter the store.

“I just want to say thank you New York, for today,” Wyden said in the video.

Despite how heartwarming the display of affection and support from the Strand’s customers has been to the store’s owner and staff, Wyden has also faced criticism for claiming her business is nearing financial ruin despite the fact that she herself has a multi-million dollar net worth and is cited on public record for having purchased thousands of dollars in Amazon stock, one of independent bookstores’ greatest competitors. Wyden is married to Oregon Senator Ron Wyden, which makes her financial transactions public record.

“I continue to stand against the unfair giveaways from local governments to giant corporations like Amazon, but the economic opportunity presented by the unfortunate downturn in the market will allow me to keep the Strand in business,” Wyden said in a statement to Barron’s at the beginning of the year, describing the purchase as one of necessity.

Employees at the store have also expressed frustration at Wyden’s handling of the pandemic as a business owner. In August, Wyden received a federal Paycheck Protection Program (PPP) loan of over a million dollars by claiming to retain 212 jobs. However, she actually laid off all but a few employees shortly after applying for the loan, a move many New York business owners have made, regardless of warning of consequences from New York governor Andrew Cuomo.  Employees have also claimed that the viral movement Wyden initiated after her call for help, “Save the Strand” has made it more difficult to run the store.

“They described staff-wide discontent with Bass Wyden’s management, fear for their jobs and those of their coworkers, and feelings of being overwhelmed as business surged unexpectedly,” Business Insider said, recounting anonymous statements given to the publication from Strand employees.

The controversy cannot erase the fact that the Strand is an iconic institution, however. While ordinary bookstores are awe-inspiring on their own, the Strand’s history, cultural significance, and unique literary catalogue creates an extra magic of their own, described by main character Lily in the opening scenes of Dash and Lily.

“Imagine this. You’re in your favorite bookstore, scanning the shelf where your favorite books reside, and there nestled between the familiar spines sits a red notebook,” Lily said. “Imagine you’re in New York and it’s Christmas. You’re surrounded by people, by possibility, and the hope that somewhere in the city is that one person that’s meant for you.”

To learn more about the Strand, browse their book catalogue, and learn about upcoming events, visit the store’s website, https://www.strandbooks.com/.