The iPhone 12 Lineup Sets the Bar High for New Technology 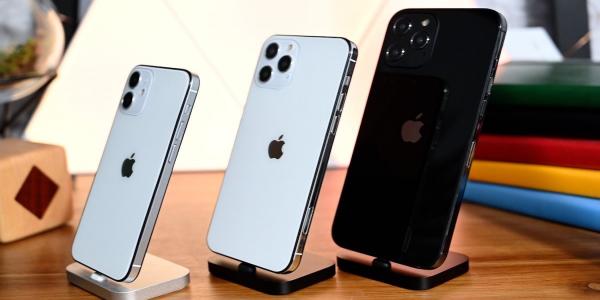 The iPhone 12 lineup arrives just in time for the holiday season. Each phone has its benefits and drawbacks against the others but overall, the lineup is comprised of incredible and versatile new technology. Photo courtesy of rajtechnews.

The new iPhone 12 lineup including the iPhone 12, iPhone 12 Pro, iPhone 12 Pro Max, and iPhone 12 Mini was released on Friday, Nov. 13. With a new exterior and added camera effects, Apple easily makes this four phone lineup a set of perfect items to get, just in time for the holiday season.

There are a few key differences between the phones in this lineup. When looking at the iPhone 12 and the iPhone 12 Pro Max it’s hard to notice any differences. They have the same A14 bionic processor, a new chip that can operate 11 trillion actions per second; as well as a 6.1 inch organic light-emitting diode screen, a more efficient light-emitting diode found particularly in film; and a 10.78 watt hour battery. So is the $100 difference between the phone prices worth it? Yes. 100 percent. The iPhone 12 Pro Max is like a hamburger. Except instead of getting the average meal, you ask for extra bacon, extra cheese, and extra lettuce. The phone has a base storage of 128 GB, where the iPhone 12 has a base storage of 64 GB. The iPhone 12 Pro Max also has an extra zoom camera with a 52 mm lens and a steel frame, making the product sturdier. Additionally, it can also record 10-bit Dolby Vision high dynamic range videos at 60 frame rates per second, making history as the first iPhone to do so. This allows iPhone users the ability to broaden their palette of colors when taking pictures in both lighter and darker atmospheres. For amateur photographers, this phone is perfect. It can expand your knowledge on various camera topics without having to pay extra for a separate camera.

And last but not least, the iPhone 12 Pro. Containing all the same features as the iPhone 12, this iPhone adds a tap of spice with its stainless steel exterior, compared to ordinary aluminum. The phone also includes an additional third telephoto camera lens, allowing users to optically zoom two times on subjects, as well as a light detection and ranging sensor, allowing users to focus their cameras on subjects in standard, low, and high-light settings. Furthermore, this device has a base storage capacity of 128GB.

When looking at Apple’s 68 second video featuring the new lineup, many viewers may be shocked at the limited things it focuses on. The video shows users making a movie with just their phones in different backgrounds, and it shows how setting and light don’t affect the camera quality. By only showing one function with an ad, Apple took a gamble in how users would first see the product. However, the smart advertising tactics used in the video were both creative and well thought out. When comparing the first iPhone, which had a 2-megapixel camera with only a 2G capacity to the current iPhone, with a 12-megapixel camera and a 256GB capacity, viewers can see why Apple shone such a big light on the drastic change.

Asides from the camera quality, I particularly enjoyed Apple’s efforts in making their products more durable. The screen is now made of a ceramic shield, a combination of glass and ceramic, which makes it three times more durable than previous iPhones. In addition, Apple made improvements on the metal frame around the phone. In previous years, the screen’s glass was curved up into the metal shield, leaving the glass exposed and easier to crack. However this year, the glass lies flush with the metal frame, protecting it more from drops and other environmental factors.

Also with this lineup, Apple uses its 5G cellular networking as one of their main selling points for this lineup. Although many carriers haven’t made the shift from 4G to 5G cellular networking, there has definitely been an upwards trend in doing so. Not only does Apple allow this newer wave of cellular technology, but it also accommodates both versions of 5G, mmWave and Sub-6GHz 5G, making the iPhone 12 a phone for the future.

The new iPhone 12 lineup offers incremental upgrades which change the experience of using an iPhone. The advancements in camera technology, durability, and cellular networking shows that Apple is always improving and raising the bar in their products. If you are looking for a new phone this holiday season, take a look at any of the four phones in the lineup. The high quality brand will speak for itself.