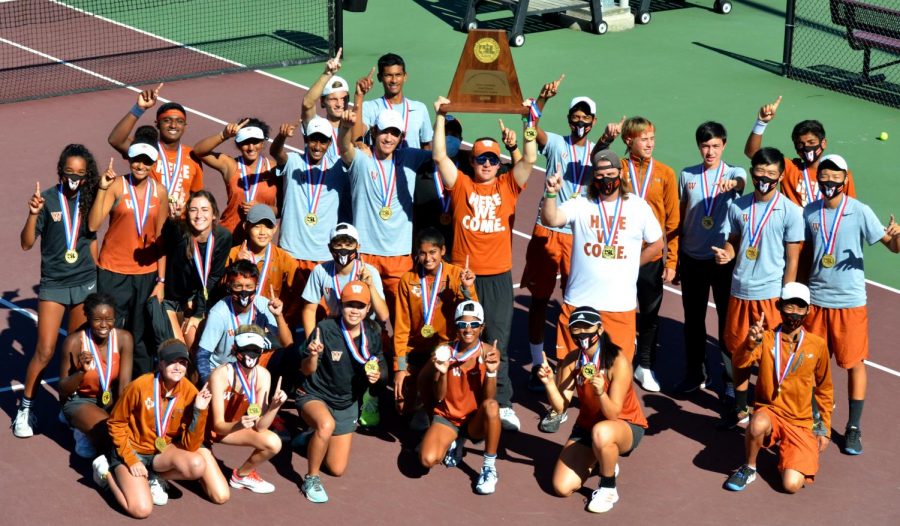 Hoisting the newest championship trophy addition upwards, head coach Travis Dalrymple and the varsity team look upwards, celebrating their second state title win. Taking on Plano West High School, the Warriors would surge through the morning in a thrilling matchup, clinching a 10-3 victory. "Watching the joy on the kids faces [when] they worked their tails off and to watch it all come together was amazing. I love this school and this program and I want the same for my players and students," Coach Dalrymple said. Photo courtesy of Antonia Antov.

As Nic Pesoli ‘21 stepped up to the ball sailing towards him with cool determination, the varsity tennis team nervously watched in anticipation. Holding their breaths as Pesoli absorbed the pace of the ball and placed his volley out of reach, their eyes widened when it bounced once, and then twice. Smiles slowly spread across the team’s faces and a triumphant yell of victory rang through the Texas A&M tennis stadium, marking the Warriors’ second state championship win in three years with a final score of 10-3 over the Plano West Wolves on Tuesday, Nov. 17.

“[This has] been our focus all season,” head coach Travis Dalrymple said. “We had a goal, we had a plan, and we executed it. [My players] worked their tails off and to watch it all come together was amazing.”

Downing their opponents in a dazzlingly painless fashion, boys’ doubles fended off their opponents one by one, punching through with clamped fist celebrations and straight-set victories. Riding the potency of dominating serve consistencies and strict minimal errors, this shot was one players exercised complete control over, a truly isolating, stand-alone stroke paramount to the game. The partnerships between Pesoli and Daniel Antov ‘21 and Sachchit Sivaram ‘21 and Zeyad Elchouemi ‘22 would take 6-0, 6-1 and 6-0, 6-4 wins.

“The environment that Coach Dalrymple and I foster is one of mutual respect combined with a strong work ethic,” assistant Coach Daniel Veve said. “The team has been able to accomplish so much this year because every person bought into this idea. Everyone knows their individual role and how it ties into the team’s goal.”

In a ferociously contested duel, what would ensue was a captivating union of finesse and missteps, of potential waiting to be tapped into and an overwhelming tenacity, all integral to a thunderous spectacle impossible to look away from. The only outstanding question that remained would rear its intimidating head to the fore, amping up the pressure in every imaginable front. Edging over a series of blistering groundstroke bullets and searing volley winners, line one girls’ doubles duo Kinaa Graham ‘23 and Dana Kardonik ‘24 cracked shots across in an exhilarating fight. After losing the first set 6-7 (5), they’d embark on a high-stakes uphill climb to take three more games, ultimately dropping the match in the last set 3-6. Gina Mepham ‘23 and Simryn Jacob ‘24 would claim a 6-4, 6-2 win.

“Winning the state title this year was proof not only [for] me, but my whole team that anything is possible,” Graham said. “I’ve learned that your attitude has a great effect on your partner’s attitude. Every time I look[ed] over and [saw] my teammates cheering their hearts [out], trying their best to keep our heads up, and pushing forward, the fire inside of me [grew] bigger and bigger. Hearing their voices pushe[d] me to grind harder point after point all the way to the end of the match.”

Aggressive movement at the net and easy put-aways constructed by heavy topspin groundstrokes kept the Warriors on top throughout their doubles matchups. Though this was only their second time partnering together during the season, Aashish Dhanani ‘22 and Jessica Lu ‘21 easily swept their mixed doubles’ match, triumphant with a 6-3, 6-1 win. Loud cheers and euphoric cries erupted as the team moved closer to their goal, prevailing after seven doubles matches with a 4-3 lead.

“Jessica’s game and mine worked out well,” Dhanani said. “[Her serve] set so many points up for me and it was amazing being able to finish the point quickly all because of her serve. I had some mistakes but I found it easy to put away a lot of balls and that’s what made our doubles match so short.”

Although the team only had a one-match lead over the Wolves at the start of singles, the Warriors launched into their games with new determination, using consistent strokes to outplay their opponents. With their heels never touching the ground, the players were quick to intercept every shot and brush a smooth but powerful ball to pull their adversaries off the court. Six singles matches swiftly finished out the finals, Marko Mesarovic ‘23 triumphant with a score of 6-2, 6-2, Antov sweeping in a 6-1, 6-1 landslide, and Pesoli emerging victorious and clinching the state title with his 6-2, 6-4 win.

“It was a dream come true to see players step up their game and do the things we practice day in and day out,” assistant coach Daniel Veve said. “Sometimes, all I have to do is casually remind a player of a drill like One Ball and they know exactly what they need to fix in the middle of their match.”

In the months tinted with the pervading chaos of the pandemic, the challenge to stay healthy was just one in a mounting cascade of uncertainty. Now champions once again, the varsity team huddled around each other, names etched in championship certainty, to gaze upwards to blue skies, new goals, and a relishing of a more than ample conclusion to a monumental fall season.