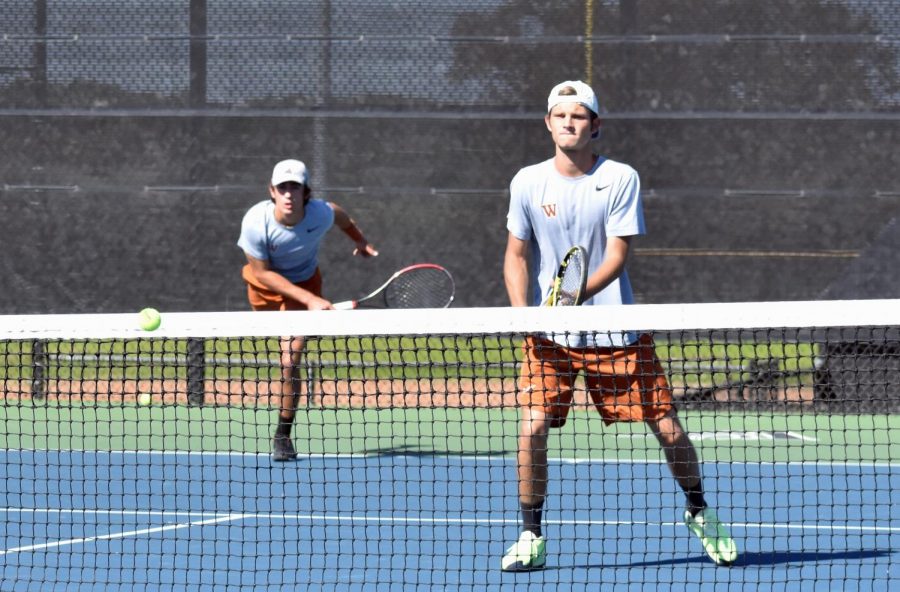 Following through on a serve to his opponents, Daniel Antov '21 and his partner Nic Pesoli '21 look onwards, anticipating the ball's trajectory. Antov and Pesoli prevailed with a 6-3, 6-0 win.

The energy was infectious and permeated the air as the varsity tennis team took on the Lake Travis Cavaliers to win their regional quarterfinals match 10-1 on Tuesday, Nov. 3.

The Warriors blazed through doubles, dominating the middle of the court and placing volleys out of reach while steadily breaking through with unwavering baseline strokes. Spirited yells of “Sko Wood” grew louder and louder as the Warriors gradually broke the Cavaliers’ will, finishing the first hour with an overall score of 6-1. Boys’ doubles was filled with thrilling matchplay ending in excited fist pumps, with all three lines controlling points easily to take care of business. Sachchit Sivaram ‘21 and Zeyad Elchouemi ‘22 steamrolled a 6-0, 6-0 win, Marko Mesarovic ‘23 and Aadhi Raja ‘23 triumphed with a score of 6-1, 6-2, and Nicolas Pesoli ‘21 and Daniel Antov ‘21 prevailed with a 6-3, 6-0 victory.

“I think me and Daniel executed our game plan well, and really took it home today,” Pesoli said. “We didn’t let up, but I think we could approach better and put the ball away more. I feel that we have a good shot at winning state this time.”

Every shot, assertively decisive in its objective to expedite the pace of the game, was propelled by bold moves and artful angles without the compromise of consistency. Forging the pathway to victory grew closer with each point waged in the high-level matchup between the two top programs. Strung together by the fundamentals, partnerships took charge, fully embracing their separate strong suits, all the while being comfortable to fall back on each other for support in a harmonious clockwork. The girls’ side carried on, where the duos of Kinaa Graham ‘23 and Simryn Jacob ‘24 landed 6-4, 6-3 wins and Jessica Lu ‘21 and Dana Kardonik ‘24 emerged with 6-2, 6-1 victory.

“We’ve really found how to work with each other. [Dana] is very consistent and reliable on the baseline and has a great serve, so I can depend on her when I’m at the net,” Lu said.

Heads of spectators rocked back and forth, eyes widening over ample groundstroke interventions caused by sharp, cutting volley shots, as net players wielded their rackets ahead of them. As the very crux of such captivating team gameplay, mixed doubles soared through the beginning half of competition, in an afternoon so intriguingly tinged with the encouraging spirit of camaraderie. Aashish Dhanani ‘22 and Gina Mepham ‘23 would prosper over their opponents 6-2, 6-4.

“This is probably one of our better matches, [as] we were both putting away [our] volleys. This match we knew was definitely going to be tough because they’re a really good team, but we made sure to stay focused and do what we needed to do,” Mepham said.

Four singles matches closed out the quarterfinals, although only one was fully completed with Dhanani sweeping an easy 6-2, 6-1 win. Lu was up 1-0 before her opponent retired from an abdominal injury, Mesarovic took the first set 6-2 and was ahead in the second set 2-0 until his rival was forced to withdraw, and Sivaram had a 3-0 lead after which his opponent exited the match. However, the Warriors still played their game and completely outstripped the Cavaliers in the end.

“Right from the first point, we took it to them [on] every single court and our kids showed up, played, and it was a beatdown. We just keep pushing ourselves and it really is coming together,” head coach Travis Dalrymple said.

Advancing yet another step closer towards the major goal coming ahead, the Warriors will face Westlake High School in the regional finals next week.