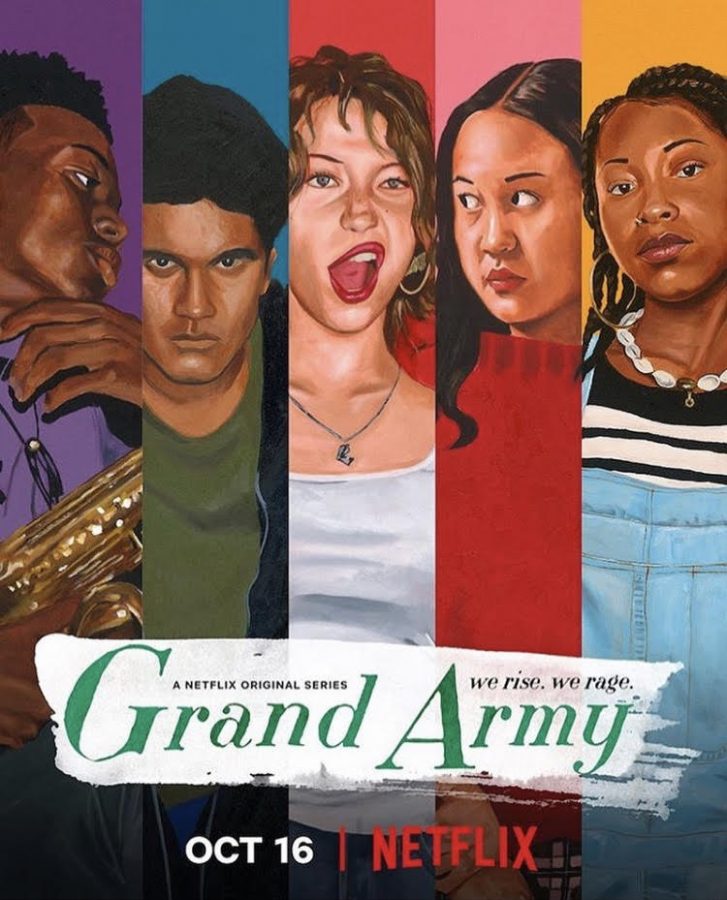 Ever since 'Grand Army's release on Netflx, people can't stop talking about it. With so much packed into one season, it keeps the audience interested up until the very end of the show. Photo courtesy of _grandarmynetflix_

Grabbing the attention of many fans of Euphoria, a hugely popular American teen drama program, the new Netflix series, Grand Army, was released on Oct. 16, 2020. It jumps straight into several heavy topics such as sexual assault, identity, racism, drug abuse, and privilege. Fans of Euphoria were surprised that this release contained even more drama. Creator, writer, and producer Katie Cappiello envisioned the show revolving around the complicated lives of five different students attending the same high school in Brooklyn, New York.

The show opens with dance team member Joey Del Marco, played by Odessa A’zion, in a strange situation helping out a friend who was mistreated by her boyfriend. The portrayal of such an uncomfortable experience effectively urged viewers to want to know more about the story of these characters, in addition to shedding light on toxic relationships and the failure of proper sex education.

Not long after, a bomb strikes near the school, and the friendship of Jayson Jackson and Owen Williams crumbles. When being forced into lockdown,  they both face serious consequences after being foolish. As legal challenges surface, their fun friendship quickly terminates. This shows how close relationships can be torn apart by one lie or mistake. Although there was potential for this clash to be resolved, it didn’t end very bright. I think this representation was highly realistic. Much like in real life, there are times where friendships end, and they are not given a happily ever after.

Freshman Leila Kwan Zimmer, played by Amalia Yoo, struggles to fit in as a Chinese adopted child of a Caucasian couple. Facing bullying from her classmates, she later questions her ethnicity and knowledge.The characterization of this role slowly becomes more narcissistic as the show continues, and she lets her anger get the best of her. There are even short sequences of animations portraying the emotions and thoughts that run through her head.

Trapped in her own world of loneliness, she tends to only focus on herself, so much so that she forgets about others around her who are also struggling. The overall theme presented with this character is disappointing. I really wanted to see her dive more into her own heritage or learn how to stand up for herself, but instead, she focused on gaining popularity and making others feel her pain. This was another dark aspect of the show that was never resolved, but it does shed light on an antagonist perspective and someone who is dealing with internal conflicts.

Student Dominique Pierre, played by Odley Jean, struggles to balance the pressures of school with her family life. As the story progresses, she is revealed as a more vulnerable character who hesitates to request for what she wants. This was another unique perspective that stressed the inevitability of hard work and the huge sacrifices necessary for success. It also overlooks the idea that one needs “their people” or friends and family in their life to help when times are especially hard.

Dance team member Joey stirs up drama and fights against policies made by the school. With her bold reputation, no one believes her own story of being assaulted. This causes her to run away from her problems. Even with such a heavy conflict, it was not glorified in the slightest. It brings attention to that fact that most assault allegations are cast-off to the side and not taken as seriously as they should be. It urges the audience to want to fight for the character, and this tragic story is just another example of what actually happens in real life. Comparing the story between Jayson and Owen, two Black students who were harshly punished for a foolish mistake, and the white students that were easily let go of for something that was far more horrible, represents the injustice and racial bias in America.

Muslim student, Siddhartha Pakam, played by Amir Bageria, fights his own battle of sexuality and what he truly wants. He decides to keep hiding his identity in an attempt to feel “natural”. Yet again, this is another scenario that may be familiar to the audience. It shows how hard it can be to make the bold decision of coming out, even with an increasing culture of acceptance.

All of the actors in this production did an amazing job bringing the character’s to life. From head -to-toe, they portrayed great physicality and emotion that reached beyond the screen.

Although the show was a success, behind the scenes there was a scandal that arose between the writers. When it was first released, Ming Pieffer and two other producers had quit mid-production due to racial exploitation and abuse from the main writer.

“The show runner and creator went full “Karen” and called [the] Netflix HR on the Black writer in the room for getting a haircut,” Pieffer said in a tweet.

In addition, many claimed that the writer was not open to their inputs on how to observe racial and cultural sensitivity with certain characters. This drama seems to bring great controversy among many viewers. Some critics even claim that there could have been a better way to recognize these harsh issues instead of focusing primarily on character development.

The students at this high school no doubt face dire challenges. An event that was once fun and games can suddenly turn into something criminal and unjust. In only nine episodes, the series covers a variety of perspectives that aren’t always positive, but always include an important message within.

I think the writer did an amazing job with creating these stories even if they weren’t sugarcoated. Every episode felt like it had some emotional lesson hidden in an exaggerated reality. The five unique perspectives illustrated how scary it can be to go through certain emotional battles. It made me grateful for my own life and the things that have been handed to me. It was so crucial that these realistic conflicts were represented, because it happens so often in our world today. The stories may have been fabricated, but it was only to let the viewers feel the same pain and anger as the real person behind these made-up characters.

The overall production itself should be applauded. The insertion of pop culture references and graphic animations made it even more interesting to follow along with. Although the dialogue was cringeworthy at times, anyone could relate to the students’ thoughts and decisions. Unlike many other shows, this one was quite unpredictable. There were surprises thrown at me up until the very end of the show.

Even though the plot was a wild roller coaster ride, the actors never failed to bring emotion to the table. They reacted to their heartbreaking problems as the audience cried with them. The amount of emotion portrayed is what really brought these stories to life. Although there is much up for debate on this show, it did a great job of captivating a young adult audience.