Varsity Football Closes Out Season with 70-41 Loss vs. Round Rock 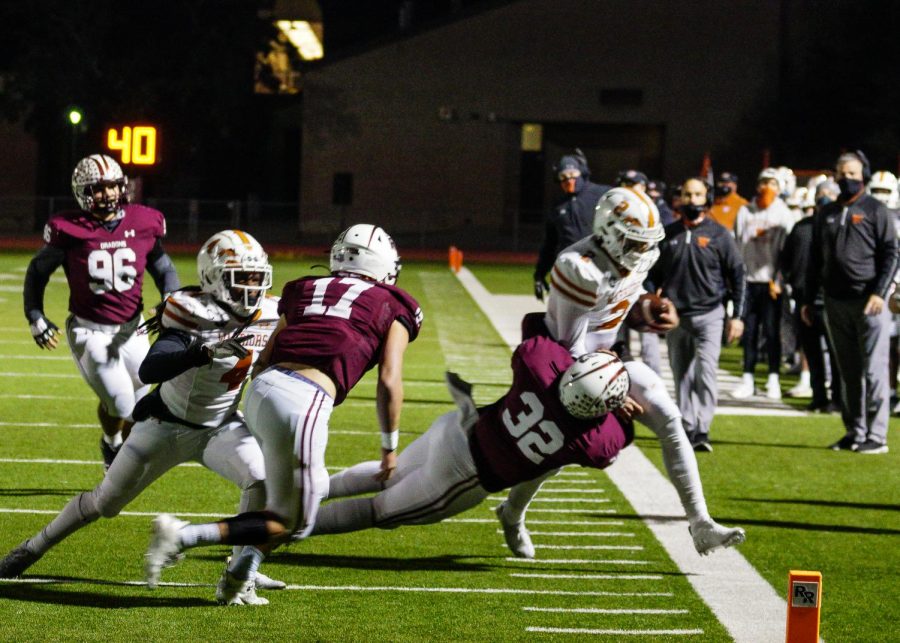 After making it past many Dragon defenders, RJ Martinez '21 is tackled. He gained over ten yards this play.

Coming off of a tough loss the prior week, the varsity football team set their eyes on notching a win in a fierce rivalry game against the Round Rock Dragons on Friday, Dec. 5. The offensive arsenals for both teams were on full display under the lights at Dragon Stadium, as the two sides combined for over 110 points. However, while it was close in the first half, the Dragons rode a strong second half to defeat the Warriors 70-41 in the Warriors’ last game of the season.

For the second straight week, the Warriors turned in another great offensive effort despite the loss. In his final game as a Warrior, RJ Martinez ‘21 had 520 passing yards and six total touchdowns, four passing and two rushing. The receiving duo of seniors Robbie Jeng and Julian DeBerry showed out as well, with Jeng posting nine catches for 176 yards and a trio of touchdowns and DeBerry recording seven catches for 241 yards.

“It was very surreal to be playing my final game of high school ever,” Martinez said. “I had a great time playing at Westwood these past three years and have created memories with my teammates that will last forever. As far as the game went, [the seniors] really just went out there to have fun and embrace our last high school game ever.”

Another touchdown on the ground for Round Rock early in the second quarter pushed their advantage to three scores; the Warriors had to get something going offensively to keep the game within reach. The Warriors got the big play they desperately needed moments later with a 48-yard bomb from Martinez to Jeng to cut into the lead. After a stop from the Warrior defense, Martinez was able to scamper for his second rushing touchdown of the game to draw closer, making the score 28-21. However, a 33-yard rushing score for the Dragons caused their lead to grow back to two scores, and it was now 35-21 with less than two minutes left in the half. Despite the time crunch, Martinez led the Warriors down the field in an immaculate two-minute drill, eventually finding paydirt with another touchdown toss to Jeng, this time from 18 yards. The first half concluded with the Dragons only up by seven, 35-28.

After the break, the Dragons opened the scoring once again with a 35-yard rushing touchdown to put themselves up 42-28. The Warriors responded with a 13-yard touchdown pass from Martinez to Tomas Henry ‘21 after a 13-play drive, but two quick scores from the Round Rock offense, from 55 and 46 yards out, blew the game open as the third quarter came to a close. Heading into the final frame, the Dragons had reclaimed a three-touchdown advantage, leading 56-35.

“We weren’t able to finish strong and unfortunately, the score showed it,” Jeng said. “It was very bittersweet playing our last game of the season, but overall I’m very grateful for the four years I’ve been able to play at Westwood, [and] I know I’ve made memories that will last for a lifetime.”

A pair of touchdown runs in the fourth quarter increased the Dragons’ lead even further, putting them up 70-35. Martinez was able to find Jeng for a three-yard touchdown pass, but by then, the lead had grown to be insurmountable. Neither team scored for the remainder of the contest, and as the final whistle of the season blew, the Warriors fell 70-41.

“I don’t have any regrets, [and] I’m so proud of our team and how we persevered all season, though our record doesn’t reflect those efforts,” Jeng said. “I wish we could’ve won more games, but I still feel like we as a senior class have left our mark, and hopefully the underclassmen are able to build upon this next year.”

The Warriors wrap up their season with a 3-6 record and head into the offseason.