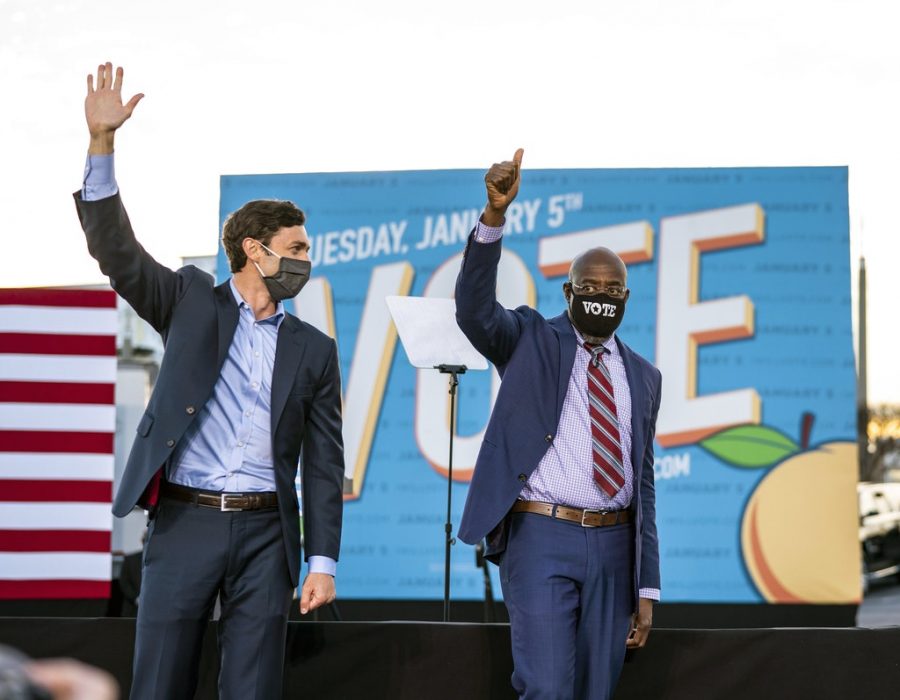 Jon Ossoff and Raphael Warnock have taken the two remaining seats in the Senate after being selected in the recent runoff elections in Georgia. The Democratic Party now has control over the entire legislative branch of the government.

The results of the recent Georgia Senate elections poured in on Wednesday, Jan. 6, declaring that both Democratic candidates in the state had successfully taken the Republican seats in Congress, moving the control of the Senate back into the hands of the Democrats. Raphael Warnock (D) prevailed over his opponent, Kelly Loeffler (R) with 50.8 percent of the vote over Loeffler’s 49.2 percent and Jon Ossoff (D) clinched the election with 50.4 percent over David Perdue’s (R) 49.6 percent. In the general election, none of the candidates in the state reached the defining 50 percent required by law, and so the candidates entered runoff elections. 4.4 million voters in Georgia cast their ballots on election day to determine the winners of the Ossoff, Perdue and Warnock, Loeffler races.

Before the runoffs, the Senate count stood with 46 Democrats, 50 Republicans, and two independents not affiliated with a political party. The independents usually caucus with Democrats, making the two races in Georgia vital for the ultimate jurisdiction of Senate power. The Democratic triumph in both contests would result in Vice President Kamala Harris casting the deciding vote in case of a 50-50 split. The unexpected success of their candidates has allowed the Democratic Party to wrestle back Senate control from Republicans for the first time since 2014.

“It feels like a brand new day,” Senator Minority Leader Chuck Schumer (D-NY) said in a statement. “For the first time in six years, Democrats will operate a majority in the United States Senate — and that will be very good for the American people”

The recent victory of both Democratic candidates in Georgia proves that the startling blue turn of the state in the general election was not a random outlier. Though the candidates campaigned throughout the state in both rural and urban areas, the large urban counties especially around Atlanta overwhelmingly carried the Democratic vote, as was seen in the presidential contest. The recent results have effectively turned the once steadily conservative state into a battleground for future elections.

“There’s no going back,” Jacquelyn Bettadapur, the chairwoman of the Democratic Party in Cobb County, a once right-leaning county that President-Elect Joe Biden won decisively during the November election, said in an interview with the New York Times. “A Democrat would be a fool not to play in Georgia going forward,” she said.

The Democratic triumph has also changed history in Georgia owing to the fact that the victors are African American and Jewish. Mr. Warnock has become the first African American Democrat to be chosen for the Senate in the South, truly marking the change in the demographics of the state. Voter turnout from African Americans was considerably higher than that of election day in November, a surprising development from the usual drop-off in runoff elections. It is clear that the growth of the Atlanta area and the numerous efforts to protect African American voting rights played a crucial role in the election, and will continue to do so in the future. Mr. Warnock’s previous position as a pastor in the historic church where Martin Luther King Jr. once preached allowed him to connect with Christians across Georgia, with his campaign speeches alluding to Biblical works while also promoting his political agenda. The massive African American turnout that successfully elected Mr. Warnock to his seat has also reversed the perception that an African American cannot be chosen for the Senate in the South.

“This election was not about [the President].” Representative Nikema Williams (D-GA) said in an interview with the New York Times. “This was about people on the ground realizing that if they show up en masse, they can overcome the voter suppression and we can win Georgia.”

However, one of the other factors that may have swayed the results was President Donald Trump’s actions leading up to the election. On the day of the runoffs, he claimed that the reason for his loss earlier in November was due to faulty results, possibly decreasing the Republican turnout. Mr. Trump’s constant pursuit of overturning the presidential election may have persuaded moderate suburban Georgia residents to vote for the Democratic candidate as well.

“In recent years, our institutions, our democracy, and truth itself have been greatly tested by those who’ve chosen to prioritize personal gain or political ambition over our democratic principles,” former president Barack Obama said in a statement. “And even a good election will not eliminate those threats.”

The various influences in Georgia have written a new chapter in American history. Voter turnout has never been as essential or relevant as it has proved to be in this past election. Mr. Warnock’s and Mr. Ossoff’s defeat over their Republican opponents has not only given Democrats control over the Senate but has ensured that the entire legislative and executive branches are within the grasp of the Democratic Party as the country moves into President-Elect Biden’s first term.