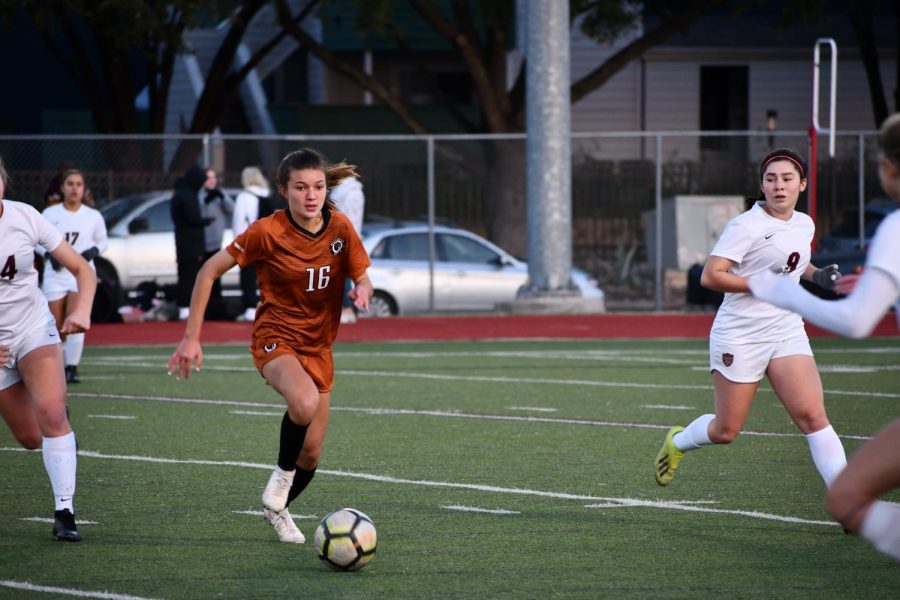 Katie Forshay '23 races to get control of the ball after it was turned lose against Dripping Springs. The Warriors were able to notch a solid win against Vista Ridge in the early goings of district play.

After winning the district last year and tying their rivals, the Vandegrift Vipers in a competitive game last Tuesday, the JV girls’ soccer team was eager to pull off their first district win against Vista Ridge on Tuesday, Jan. 26. The Warriors were able to achieve their goal, defeating them 2-0.

The game started slow, with minimal interference in passing. The ball laid the majority in the middle of the field, with no team given the opportunity to shoot on goal. Due to the slow pace of the half, players began to force the action towards each other. The first half ended in a 0-0 tie.

Despite the slow start to the game, the Warriors were eager to redeem themselves. Walking onto the field moments before the second half, the girls were seen cheering on each other as well as jumping side to side to keep their momentum going. Taylor Yanko ‘23 and Abigail Burgett ‘23 were able to make consistent and continuous 1-2 passes and catch their opponents off guard. The ball remained mostly on the Rangers’ side of the field during the second half, with the Warriors getting continuous shots on goal. The first goal, scored by Tayte Webster ‘23 at the beginning of the second half, came from a cross which Webster was able to get a head on and score. The second goal came from a Vista Ridge pass which Padt Skawratananond ‘23 intercepted and scored. The Warriors finished the game with a 2-0 win.

“We started off a bit slow in the first half but eventually progressed into a really strong, dominating team in the end,” Katie Forshay ‘23 said. “It was a really fun game.”

The Warriors will compete against their rival, the Round Rock Dragons, at home for their next game on Tuesday, Feb. 2.