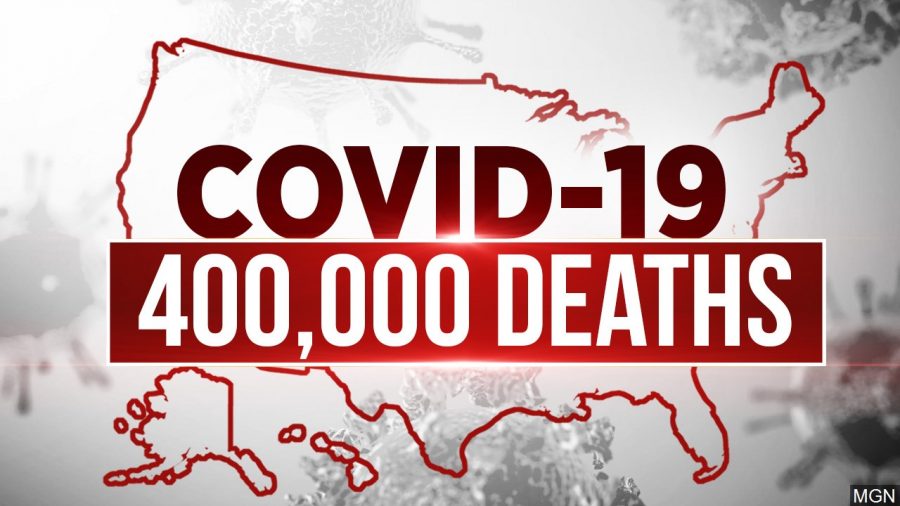 The U.S. has surpassed 400,000 deaths from COVID-19 in the past few weeks, and is slowly edging towards 500,000, despite the current vaccine rollout. Photo courtesy of Jason Hanna.

Though less than a year has passed since the outbreak of COVID-19 in the U.S., the death toll has risen at an exponential rate, passing the number of American casualties to World War II. On Tuesday, Jan. 19, President Donald Trump’s (R) last day in office, the number of deaths recorded for COVID-19 in the United States surpassed 400,000. This grim milestone is a reminder to many that as the national curve continues to fluctuate, the country is far from eradicating the virus, even if daily life in many places has adapted to the various safety restrictions and regulations implemented to slow the spread.

When the White House Coronavirus Task Force was first set up in early March of last year, the team predicted a total of less than half the number of deaths the country has experienced so far, deeming even 300,000 deaths unthinkable. COVID-19 is now taking more lives than any other disease, surpassing both heart disease and cancer mortality numbers in the country. Today, every 26 seconds, one more life is claimed by the virus in the U.S.

“What’s so troubling about this loss of life is it was preventable,” Director Emeritus of the Center on Society and Health at Virginia Commonwealth University Dr. Steven Woolf said in an interview with USA Today. “This is an infectious disease we knew how to prevent, and as difficult as it is, far easier to solve than defeating Nazi Germany. And yet, we did not mount a response to wage war against this virus as we have in these other situations.”

Despite the news that both the Pfizer vaccine and the National Institute of Allergy and Infectious Diseases (NIAID) vaccine are being slowly rolled out in increments to the public, public health experts believe the accelerating mortality rate is too far ahead to be combated by the vaccines as of now. Only about 8 in every 100 people in the US have received at least one dose of the vaccine. Given that distribution is currently disjointed and will be a prolonged process, experts say that the country cannot rely on the administration of vaccines to prevent the possibly devastating number of deaths still to come.

“The trickle of vaccine is so tragically scant — what we need is more of a river of it,” Director of the University of Michigan’s Center for the History of Medicine Dr. Howard Markel said in an interview with NPR.

Approximately 4,400 deaths were reported on Tuesday, Jan. 12, marking the day as the deadliest in the entire timeline of the virus. Even though scientists had expected the cold weather in winter to create a surge, the rapid increase in deaths during the early weeks of January was unanticipated. Three hundred thousand deaths quickly rose to 400,000 in a short period of five weeks.

“It’s very hard to wrap your mind around a number that is so large, particularly when we’ve had 10 months of large numbers assaulting our senses and really, really horrific images coming out of our hospitals and our morgues,” Chair of Epidemiology at the San Francisco University of California, Kirsten Bibbens-Domingo, said in an interview with NPR.

Although hotspots in the nation are still centered in the largest cities, including metropolitan areas in California, Texas, Florida, and much of the East Coast, people who live in rural areas have a higher chance of dying from the virus because of smaller intensive care units and dwindling supplies in hospitals. Many parts of the country have been forced to contend with a disproportionate number of deaths. Alabama and Arizona have both experienced extremely high death rates in proportion to their populations.

“We know that the more spread we have, the more positive cases we will see, which will result in more hospitalizations and ultimately more deaths,” Chief Clinical Officer for Banner Health, Arizona’s largest health care delivery system, Dr. Marjorie Bessel, said in an interview with AZCentral. “We need more mitigation, more enforcement, and more personal accountability from every Arizonan.”

Many experts attribute the enormous loss of lives to Mr. Trump, due to the fact that his administration refused to enforce a nationwide mask-wearing policy and left the states to implement inconsistent measures that had varying degrees of success in bringing the virus under control. Many also refer to the fact that several other countries with relatively large populations were able to subdue the virus and greatly reduce death rates, including Vietnam, South Korea, and New Zealand, whereas under Mr. Trump’s leadership, the United States could not.

“It wasn’t that he was just inept,” Columbia University Professor of Environmental Health Sciences Jeffery Shaman said in an interview with the New York Times. “He made something that could have very easily turned into a point of patriotism, pride, and national unity — protecting your neighbors, protecting your loved ones, protecting your community — into a divisive issue, as is his wont, and it cost people’s lives.”

With the recent inauguration of President Joe Biden (D), scientists are hopeful that his aggressive strategy to combat the virus, especially the recent mask mandate, will be more effective in lowering the spread and death count. Even so, COVID-19 persists, and 500,000 deaths may soon become a reality.