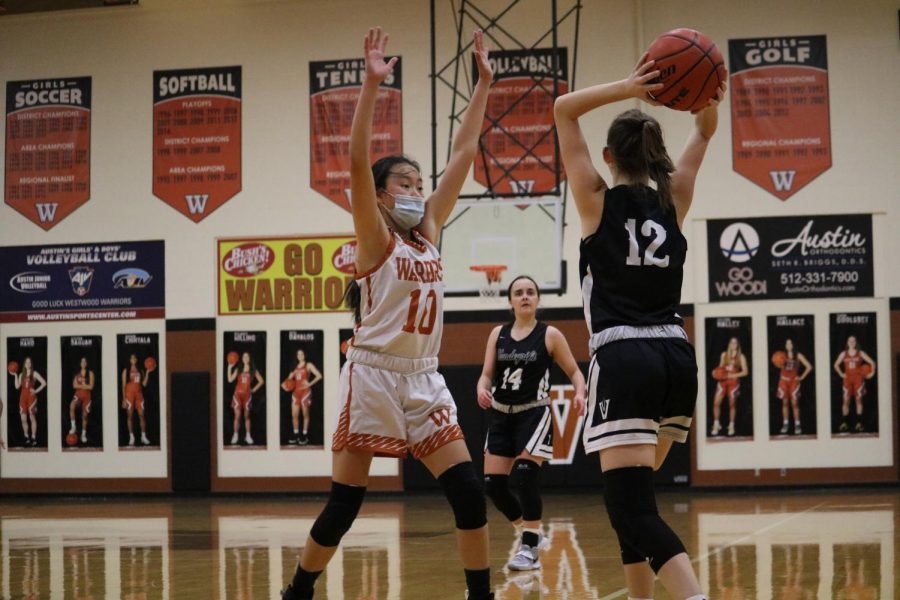 Holding her hands up high, Olivia Yang '23 runs up and tries to block her opponent from passing the ball. In such a close game, tight defense was on full display throughout the game.

Playing in the last game of the season, the JV basketball girls faced off against the Vandegrift Vipers on Friday, Feb. 5 in the Field House. Despite being without a coach, they kept up with the Vipers throughout the whole game, but lost 44-40.

“Overall, our team had some really good passes,” Kendal Farquharson ‘23 said. “We made sure not to turn over the ball as much. I think we have a lot to improve, but we are getting there.”

Throughout the first quarter of the game, both teams managed to score with ease, but they struggled to hold up their defense. The Warriors had a good start but fell behind later on, with the score at 12-10.

In the second quarter, both teams traded shots. Unfortunately, Vandegrift continued to stay in the lead, with the score being 23-19 at the end of the first half.

Not making much of a difference in the scoreboard throughout most of the second half, the warriors almost started to feel defeated. With five minutes left in the game, the Warriors were behind 43-31 until they made three more buckets in a row immediately after, but lost 44-40.

“I think since this was our last game we gave it our all,” Olivia Yang ‘23 said. “We had to make a comeback, but we stayed with them and we never gave up. I think it was a perfect way to end the season.”

The JV girls plan to work even harder next season. Until then, the JV boys plan to take on Cedar Ridge on Tuesday, Feb. 9.