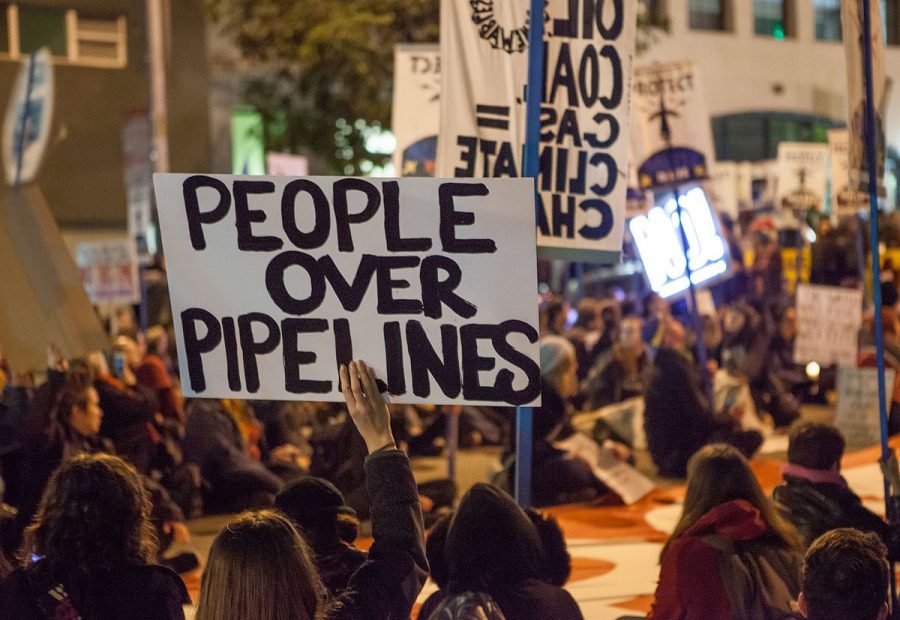 One of the many actions President Biden took in his time in office was stopping construction of the Keystone Pipeline. While news sources say this is hurting the economy and destroying jobs, the truth is much more complex than that. By taking this stance, President Biden is paving the way for a cleaner future and even more jobs. Photo courtesy of Wikimedia Commons

As I was scrolling through my daily recommended Google News headlines, I couldn’t help but stop at the one from Fox News– “Keystone Pipeline canceled, let the layoffs begin.” Although Fox News is known for embellishing topics that don’t fit inside their conservative bubble, this one was too hard to ignore. The pandemic has already shredded over 22.2 million jobs. The number of people who now can’t afford to get weekly necessities such as food or pay a month’s rent and are being forced to look at other options is astonishing. The number won’t go away very easily and the fact that it seemed like the United States was adding onto that burden was staggering.

Already intrigued by the headline, I clicked on the title. Off the bat, the article began talking about President Joe Biden getting rid of more than 11,000 jobs, all in one day’s worth. However, the facts behind the argument didn’t make sense. The hyperlinks led to error pages and the only other source I could find was Twitter. Since then, the tweet about job loss has been deleted and the creator of the post has not responded to any media outlets. Was I shocked? No. It’s a daily occurrence to see the media lie or use unreliable sources such as social media posts to back their statements. However, I did want to understand Biden’s thought process for the order. He made a vow to help Americans through the COVID-19 pandemic, and so far it seemed as though he hadn’t made much of a leap in that area.

Turns out the 11,000 jobs? 10,000 of those don’t even exist. Losing 1,000 jobs isn’t exactly the best way to start off as president. However, it’s a revealing window to the world on how much Republicans adore the fossil fuel industry or more specifically, the privileged white men working in it. In 2017, 79 percent of workers in fossil fuels were white men. To add to the argument, Pipeliners Local 798, a well-known company that sources pipeline welders to contractors across the country, has a leadership team comprised of all white males. This isn’t a coincidence. In fact, on Tuesday, Jan. 19, a group consisting of over 500 workers sued Pipeliners Local 798, claiming that minorities and women are routinely being denied promotions over less qualified white men and are subject to both verbal and physical harassment in the workplace with no consequences. To make matters worse, this isn’t the first time Pipeliners Local 798 has been accused of racism. In the mid-80s, the Equal Employment Opportunity Commission found that the union had “engaged in intentional discrimination resulting in disparate treatment of blacks and women.”

“The cream always comes to the top and I’ve surrounded myself by some of the best leaders in the pipeline industry,” the union’s business manager, Danny Hendrix said to NPR after being asked about the racism in the workplace. “Are they white? They just happen to be, yes.”

I’m not saying that race is a key factor in Biden’s plan to expel these jobs.

In addition, I was curious as to why Republicans were so against the loss of these jobs because it had come to my attention that so many conservatives, specifically pro-life conservatives, were protesting to get former President Donald Trump to shut down Planned Parenthood. Shutting down Planned Parenthood would result in thousands of Americans losing their jobs. However, conservatives don’t see that because, in their eyes, the ends justify the means. Shutting down Planned Parenthood to them is a sacrifice that needs to be made. However, if they took a minute to look at things from a perspective of a liberal global warming activist, they would see that shutting down the Keystone Pipeline is a sacrifice we need to make the world a safer, and cleaner place. If pro-life supporters truly cared about life and not just power over a female body, they would see that this order was made to keep their lives, and the lives of their loved ones safer.

To fully understand why Biden chose to make this order, we must first look at Biden’s predecessor and what he accomplished in his term. In 2010, former President Barack Obama blocked Canadian National Energy Board’s project to create a pipeline construction from Hardisty, Alberta to Steele City, Nebraska due to environmental reasons. Obama’s successor, Trump later revoked the order. The pipeline was supposed to serve as an oil boom for the United States, however, it would also result in 168 million metric tons of carbon dioxide emissions being released each year. In addition, the Keystone Pipeline also threatened the air, waters, and health of communities along its route. Unlike the 11,000 jobs Fox News had claimed the Keystone Pipeline would supply, the pipeline will only generate 35 jobs. By the time Biden took office, the pipeline had not been finished- approximately 3,456 kilometers of it had been completed.

“Leaving the Keystone Pipeline permit in place would not be consistent with my Administration’s economic and climate imperatives,” the Biden administration said in the executive order. “At home, we will combat the crisis with an ambitious plan to build back better, designed to both reduce harmful emissions and create good clean-energy jobs.”

Instead of focusing on creating 35 jobs, the Biden administration is working on a renewable energy sector that will initially create millions of jobs for workers to create clean energy technologies and vehicles to sell internationally. In addition, Biden said in a press release that he will ensure that these jobs will offer good wages, benefits, and worker protections. Biden also stated that he would like to reach several goals, including pursuing strong new measures to stop other countries from cheating on their climate commitments, develop a low-carbon manufacturing sector in every state, ensure businesses will have access to new technologies, and hold polluters accountable.

It’s no joke that climate change is real and is damaging Earth at an accelerating speed. Unfortunately, the Biden administration had to bite the bullet and let go of 1,000 jobs to enact a clean and renewable notion. However, Biden is determined to create millions of jobs for Americans in the renewable energy industry. In order to clean up the already polluted world, conservatives need to understand Biden’s standpoint and not take bits and pieces to form words out of his mouth. It’s understandable to be angry that the person you voted for isn’t in office, but at some point, conservatives need to let it go. They shouldn’t let a defeat blur their vision of a never ending global crisis.